Another dark tale is being spun out from Disney+’s studios, and thriller Connect has released its first teaser video and poster. Adapted from a webtoon, the story follows the advent of a new breed of human that can never die. These immortal beings are called Connects, and Jung Hae-in (D.P., Snowdrop) will be playing a Connect named Ha Dong-soo.

Jung Hae-in’s character can’t seem to catch a break; he is kidnapped and has one eye forcibly removed. While he recovers, he realizes he can still see through his eye and that he’s become connected to a man who has thrown the country into disarray with a series of murders. Desperate to remove the link between them, he decides to hunt down the serial killer.

The serial killer in question will be played by Go Kyung-pyo (Seoul Vibe). Named Oh Jin-seob, he has two faces like the Roman god Janus. At his day job, he appears every inch a perfect person and a cool colleauge but this all masks an unimaginable monster.

The third protagonist will be played by Kim Hye-joon (Inspector Koo). Her character, Lee Yi-rang, hides behind a metaphorical curtain as she helps Dong-soo. She holds secret knowledge behind the whole Connect phenomena.

The full cast has not been confirmed yet, but we know that Jang Gwang (Little Women), Kim Roi-ha (Crime Puzzle), and Yang Dong-geun (Human Disqualification) will have roles as well.

The video teaser is not for the squeamish, just a heads up if you don’t like blood or tentacles! Two drops of blood sit on a desk, and suddenly they move of their own volition as a voice asks, “Did you say it was a Connect?” A different voices sings softly as a figure is approached in the night by a car. “Heavy metals, a low heat / Melt together, they crash…”

Cut to Dong-soo, in pain and exerting himself trying to rip off an eye patch. He runs across a roof as though he’s being chased, and leaps from the building. He lands in a heap and blood beings to pool around his head. The screen changes to copy: “Official Selection at the 27th Busan International Film Festival.”

We go back to Dong-soo as he lies on the ground, seemingly lifeless. From the blood, tentacles emerge and push him upright. He looks to be in immense pain, but he’s alive. Director Miike Takashi’s name flashes across the screen. We shift from Dong-soo to Go Kyung-pyo’s character, Jin-seob. First focusing on his spectacled eye, Dong-soo narrates that he can see what “that bastard” sees. As he states this, there’s a succession of quick cuts where we see Dong-soo join a crowd gathered at a crime scene and then at a public phone booth. There is Jin-seob in all his bowl-cut glory, and though it flashes by, a bloody woman seems to be tied aloft behind him. We also get quick shots of Kim Hye-joon and Kim Roi-ha.

A disembodied eyeball pops up and then we switch to a close-up of Dong-soo’s eye. The text screen reads: “He’s connected to him.”

As Dong-soo screams, “Get out of my head!” we get another sequence of quick shots. It’s a frenzied series of moments: Dong-soo in a physical struggle with an unknown man, two people falling atop a car, Jin-seob looking rapturous and then spinning someone around in a wheelchair. Dong-soo in severe pain as sparks fly is followed by a moment of Yang Dong-geun’s character partying in a club, then a horrified-looking man grasps a severed hand with tentacles flying out of one end. A body bag in a cold storage unit is tied in mid-air, with Jin-seob suited up in killer gear. Dong-soo rips his eye patch off in a fury and there’s nothing but a dark void where his eye used to be. The teaser ends with a tangle of tentacles spell out the word “Connect.”

Disney+ may be making drama history: could this be the first-ever wrist grab done with a severed arm? Wrist grabs aside, it looks like tentacles will be a big thing for the drama and frankly I’m not sure I’m here for it. I can be squeamish, and though I enjoy Jung Hae-in, I don’t know if I can handle tentacles popping out of him constantly (once or twice would be the limit for me lol). Also, are they really going to have him wear an eye patch for the duration of the drama? I admire his willingness to look less than perfect, but I wish that didn’t result in a look that says “Pirate in search of lost boat.”

Connect will be directed by Japanese maestro of film Miike Takashi and will have its first screening at the Busan International Film Festival. The drama will have its streaming premiere on Disney+ in December of this year. 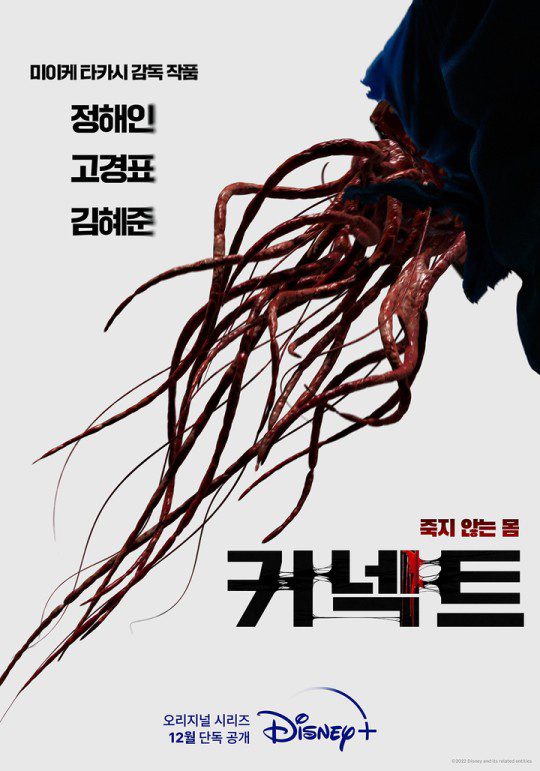 ... and the Fourth Protagonist: the Korean Version of Venom?

Hum... Will I be able to watch it? It looks dark and scary. But the production seems top-notch.

I love Jung Hae In, so no question will watch.

The cast is terrific but the premise is food for nightmares. Those tentacles! 😬 I doubt I will have the fortitude to watch this.

Looking back at Miike Takashi’s films, Connect actually comes off as relatively tame in comparison. I’m not one who’s usually squeamish about violence or gore, but his movies have freaked even me out. His content is often extreme to a disturbing degree.

However, that’s not to say I dislike everything I’ve seen of his work and I do really like this cast. If he tones down the graphic violence (particularly the sexual violence and mutilation) just a tad bit, I could see this being a standout of the year.

I've totally read the webtoon for this. At least, most of it. It's so good ahahaha :)

I'm tired of seeing Jung Hae In in misery. DP, Snowdrop, and now this. Though I can understand he probably doesn't want to get typecast being the cute guy in fluffy rom coms.

Terrific. Finally caved in and got myself a Disney membership to catch up on all the marvel/ star wars stuff. Got surprised by all the korean dramas available on there, lol. So this just came at the right time for my subscription. The drama looks dark enough that I'm willing to give it a try.

He has such nice hands...

Ok, you had me at Takashi Miike. Ever since I heard this, my interest got peaked. Then adding these actors sold me on it. Also, I dig seeing actors be versatile because I like that in my actors. Jung Hae In doing thrillers more is a yes for me!