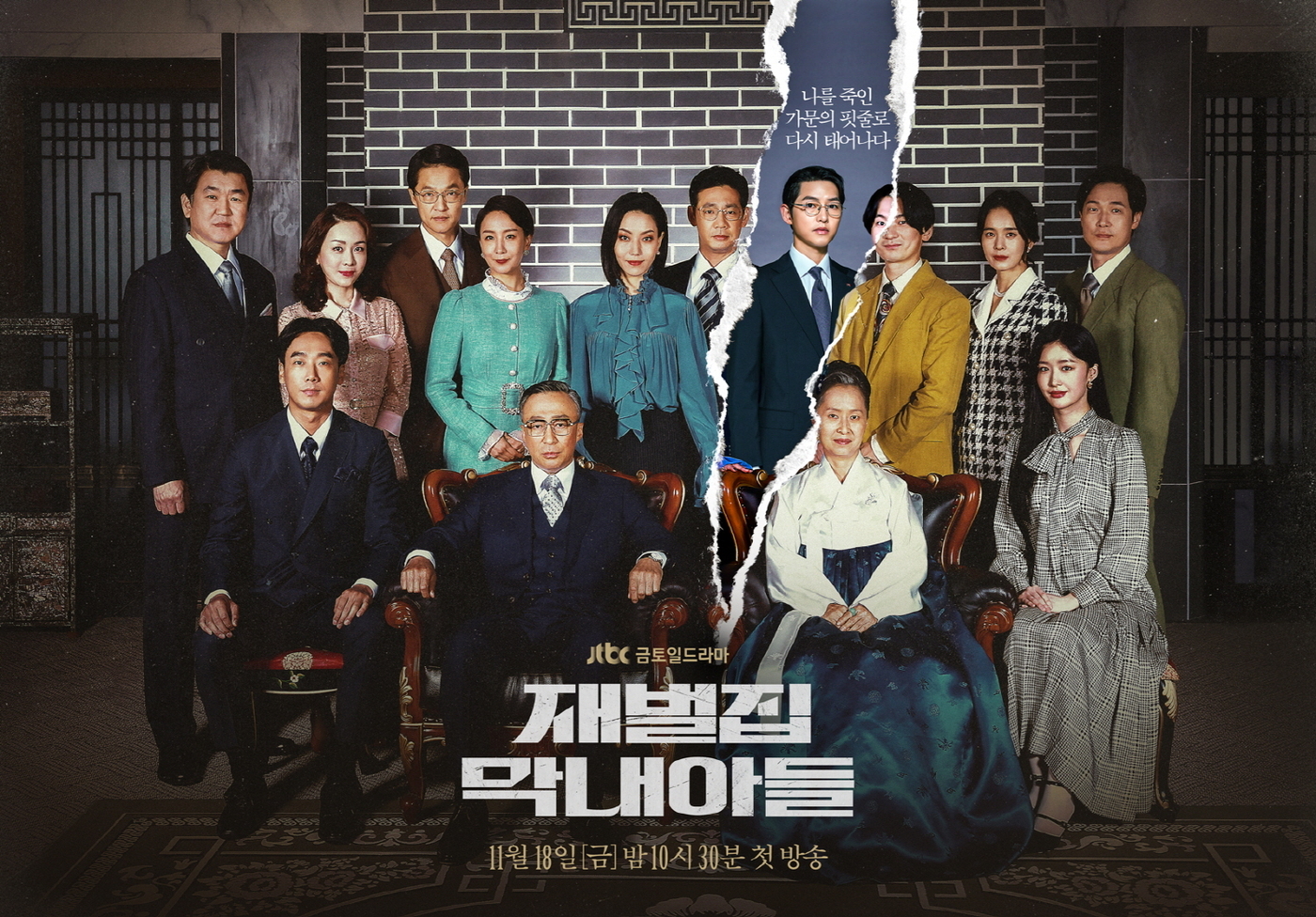 The first poster is out for JTBC’s upcoming fantasy Reborn Rich (previously Youngest Son of a Chaebol Family), assembling our ensemble cast in a big family portrait fresh from the 1980s.

The odd one out in the poster, of course, is our displaced hero Song Joong-ki (Vincenzo) who stars as Yoon Hyun-woo, personal secretary to the Soonyang Group’s leader. The conglomerate betrays him, though, forcing Hyun-woo to become a scapegoat for Soonyang. But he’s given an unexpected opportunity to take his revenge when he somehow finds himself in the body of the family’s youngest male – Jin Do-joon – back in the 1980s.

Lee Sung-min (Juvenile Justice) plays the esteemed head of the family as Jin Yang-chul. Coming from a poor background, he started out with nothing to his name and built the company from the bottom up. But even though he now enjoys great wealth and success, he remains mercilessly fixated on making more money.

Yang-chul’s three sons, eldest to youngest, are Yoon Je-moon (The King’s Affection), Jo Han-chul (The Law Cafe), and Do-joon’s dad Kim Young-jae (The Witch Is Alive). In the role of their wives, respectively, we have Kim Jung-nan (Snowdrop), Seo Jae-hee (Twenty Five Twenty One), and Do-joon’s mom Jung Hye-young (Snowdrop).

In the family portrait, we also get a look at Yang-chul’s wife  Kim Hyun (Link: Eat, Love, Kill) and daughter Kim Shin-rok (One Ordinary Day) along with her husband Kim Do-hyun (Tracer). Moving onto the third generation, Yang-chul’s grandchildren – in addition to Do-joon – include Kim Nam-hee (The Law Cafe), Jo Hye-joo (A Love So Beautiful), and Do-joon’s brother Kang Ki-doong (The Witch’s Diner).

Although not featured in the newest poster, the drama also co-stars Shin Hyun-bin (Monstrous) as prosecutor Seo Min-young, who is nicknamed as Soonyang’s grim reaper.

Reborn Rich is my most looking forward to drama. I hope it's epic. Although three days a week doesn't divide into 16 episodes very well.

Anddddd the worst kdrama English title of 2022 goes to...

Why is JBTC airing 3 episodes a week? That'll cut down air time to only a month and it's not good for generating momentum.

Why isn't this on Netflix? Gonna be figuring out where to watch this.

I also thought it sounded weird and it makes me better appreciate the working title. Hhmm I read that JTBC is probably trying to recoup the production costs by airing it three times a week, and they probably feel more reassured to take the risk because this is led by Song Joongki.

Wow! Finally. An airdate after 1 full year of waiting. Thankfully, this saw the light of the screens.
All this while I thought Shin Hyun-bin was a daughter-in-law in the family. So she's a grim reaper prosecutor(🙄+chuckle).
3 episodes a week. This would have been perfect for a 32-48 episode drama. 3 a week is too speedy for 16 episodes with close to 1-hour runtime each episode.

I read that in spite of her awesome description, her character in the book does not have much of a role in the plot until much later for the grand finale. And her relationship with Song Joongki's character is pretty underdeveloped, so yes hopefully the scriptwriter gets to showcase her talents and develop the characters' chemistry.

Can I be a little disappointed. Reading this just amped up my initial worry about her role. I hope she has more to do than the character in the book.

One thing I don't like are tangential lead characters. It irks me. Especially when I know how much they can offer.

I love the poster design--it makes Song Joongki the embodiment of the term cuckoo's egg.

This looks very makjang-ish. Or is it really a makjang? The premise sounds like a cross between Again My Life (apparently there is a female grim reaper here as well ...) + Money Flower. Hopefully it can be as good as Money Flower, the gold standard of revenge makjang drama.

I can see JTBC throwing their last ditch of hope here, after 2 years failing to reach double-digit rating. Lol

on the other hand, it seems like the programming team JTBC is in some sort of competition to won "worst drama title of the year" award, sort of.

My long await has end. Please be good.

The poster still says In Korean: “The Youngest son of a Chaebol Family”. I assume then it is the English title which has been changed to that terrible new one.