Kim Nam-gil! Fighting! In a suit! Am I sold? Most definitely. TVING’s upcoming drama Island gives us a very different look at Jeju Island — its serene landscape is nowhere to be seen here, and is replaced instead by dark and barren terrain. It’s the handiwork of evil demons, who are bloodthirsty for death and destruction.

Leading the fight through the darkness (heh) is our hero Ban, played by Kim Nam-gil (Through the Darkness). He’s human, but not quite — as an immortal being, Ban has been tirelessly protecting the world from ill-intentioned spirits for thousands of years.

Lee Da-hee (Love is for Suckers) joins him as Won Mi-ho, a third-generation chaebol and high school teacher. Through a serendipitous run-in with Ban, Mi-ho finds herself encountering ghouls for the first time in her life. Rounding out our main trio is Cha Eun-woo (True Beauty) as Yo-han, a young exorcist priest who’s renowned for his exceptional skills.

The drama’s first teaser gives us an exciting look at all the action to come, complete with CGI weapons and hissing monsters. Those glowing eyes certainly look menacing, but our heroes aren’t the least bit cowed. Without missing a beat, Mi-ho levels her gun at an unseen enemy, Yo-han conjures up what looks like a lightsaber from thin air, and Ban wields an intricately carved dagger that also features on our drama’s first poster.

Interestingly, there’s a split second of Ban doing some sort of hand sign — I wonder if he has some sort of supernatural power, perhaps linked to his immortality? That seems like it would complement Yo-han, whom we see performing an exorcism in a candlelit room.

Our trio may not be the most likely alliance, given how different their backgrounds are: Mi-ho’s sophisticated elegance certainly doesn’t mesh with varsity-jacket-wearing, face-bandage-sporting Yo-han. But if one thing’s for certain, it’s their resolve to purge the world of evil. As the teaser draws to a close, Ban gives the camera a confident smirk, as if challenging any foe to take him on if they dare.

Based on the webcomic of the same name, Island is directed by Park Bae-jong (Fabricated City) with scripts written by Oh Bo-hyun. The 12-episode TVING drama is set to air in December. 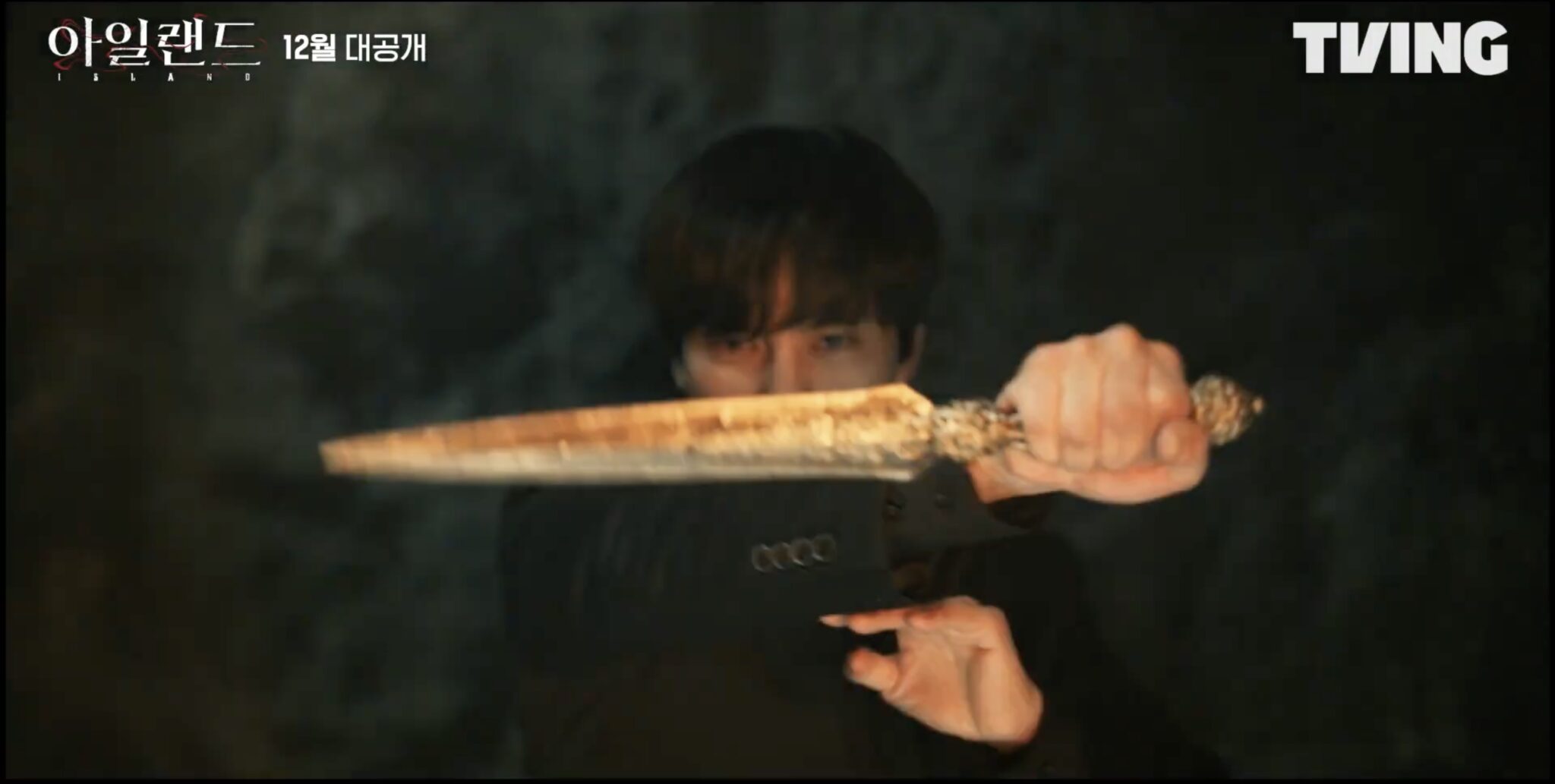 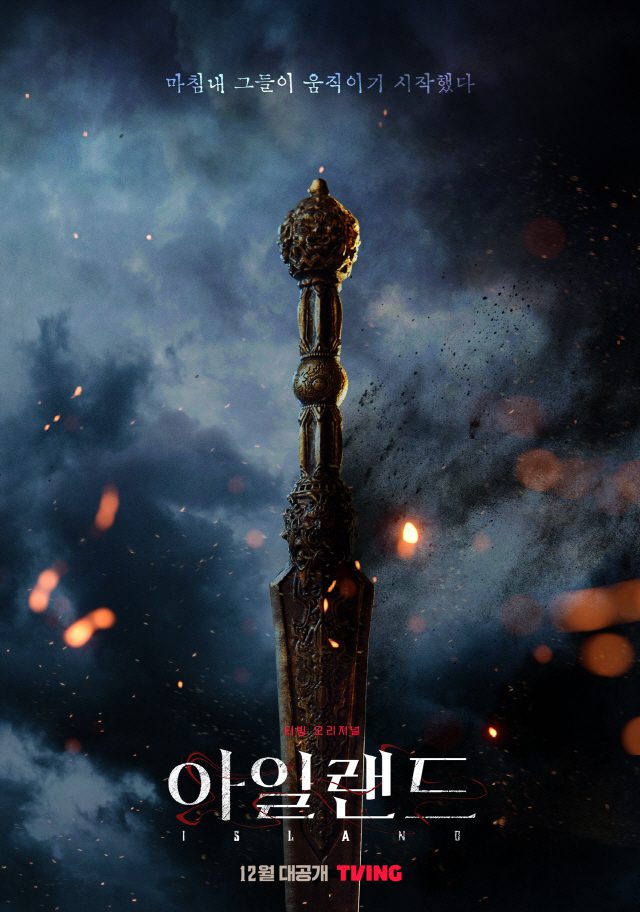 Island has been on my watchlist for like two years at this point and has changed casting like thrice lol. Nice to get some farther production news for it at last.

Omg omg omg!!! Nam goong min's drama ends and Kim Nam Gil's drama starts! 2 of my favorite k-drama actors are on my screen back t back? Yaay! Looks like the drama gods are with me in this end of year.

YES! And me!!!!! I thought the same thing soon as I read this! How lucky are we!

Right behind you. Too bad, too, because I really like Kim Nam-gil and Lee Da-hee.

Same here. Even Oppa for a Year couldn’t make me feel otherwise.

But KNG in the picture before the last picture is so full of promises! His acting is second to none. I wish he did more light dramas. *sighs*

You got me with Kim Nam Gil. 💕 Lee Da Hee and Cha Eun Woo are bonuses.

I hope Cha Eunwoo will do action scenes!

Honestly, I didn't expect Island to go full-on fantasy even though it's a fantasy drama, so it was a nice surprise. Kim Nam-gil will be amaaazing as he usually is, and I'm looking forward to Cha Eunwoo's character.

And for me to see what Lee Da-hee will do in this drama. She is really good in Sucker For Love with the loveable Choi Si-won.

This looks like fun. I still haven't seen a Cha Eun Woo drama.

8 la wants to feel liberated too

I didn't know Island is a fantasy drama! With Kim Namgil, this will be on my watch list. Please be good!!

This looks like TVN's big-budget end of the year drama with double-digit rating targets! Last year they kind of fail at it with Bulgasal. Previously though, they had success with Mr Queen, CLOY and Alhambra, so all best to the production and programming team!
The cast should warrant enough anticipation for high rating numbers alone ... amazing they could assemble Kim Nam-GIl, Lee Da-Hee, and Cha Eun-Woo. It must be very expensive.

Please show be good!!!Heard there might be a second Season as well...
Really excited to see Van and the others in action...Still a bit side lined by Cha Eun Woo so hope he will be decent acting wise...Remember that in the webtoon Van as a serial killer,guess here they changed a bit to make him more likable as a hero

Epic teaser!!
It looks scary, but I will persevere. XD

Kim Nam-gil being intense and mysterious! He can totally pull it off! I've never seen Lee Da-hee in this type of drama, so I'm looking forward to seeing what she does here.

I somehow missed this article, which is a travesty because I've been waiting for news about this show and I like everything I've seen for it so far. The action! The fantasy! The smirk! Sign me up already.