An ambitious career woman aims to smash the glass ceiling and achieve the CEO position at the advertising agency where she works. However, the race up the corporate ladder is ruthless, and she must wage war against her competitors.

An ambitious career woman aims to smash the glass ceiling and achieve the CEO position at the advertising agency where she works. However, the race up the corporate ladder is ruthless, and she must wage war against her competitors.

The promos have kicked off for JTBC’s upcoming Agency, starting with new stills and a video teaser of the office drama’s main cast: Lee Bo-young (Mine), Jo Sung-ha (Adamas), Sohn Na-eun (Ghost Doctor), Han Joon-woo (The Empire), and Jeon Hye-jin (My Liberation Notes).

The story follows our heroine Go Ah-in (Lee Bo-young), the creative director at VC Group who overcame discrimination to become the company’s first female executive board member. But her dreams are higher still and she’s determined to keep pushing until she makes her seat at the very top of the ladder.

One big obstacle is chief director Choi Chang-soo (Jo Sung-ha), who has his eyes on the same prize and has long been scheming to become VC Group’s next CEO. Also entering the succession war is the newly appointed head of social media communications and star influencer Kang Hanna (Sohn Na-eun) – who is also a member of VC Group’s chaebol family.

Hanna has additional support as well from her right hand man, Park Young-woo (Han Joon-woo). He was her tutor during their school days, and now works as her bodyguard and a VC Group secretary. But Ah-in is not alone on her side, having recruited the talented copywriter Jo Eun-jung (Jeon Hye-jin). As a working mom, though, Eun-jung is having a tough time juggling between her job and her family.

The video teaser opens with our heroine presenting a meeting: “People like me who have nothing to lose don’t tend to have an optimistic outlook. We see things from an economical perspective.” While Chang-soo is busy networking, Ah-in studies billboard ads in the area while reflecting on the viewpoint we hear in voiceover: “The real players make their own message.”

We then jump to Ah-in’s confusion about the company wanting to push out a new ad when their CEO has just been imprisoned. In a meeting with Chang-soo, the team are told that the budget is 30 billion and that they have one week, but the sooner the better. In the intermittent text screens, we read: “Delving deep into the greed of others, the graceful but desperate war has begun!”

In the sequence that follows, Chang-soo celebrates while the rest of the staff – including Ah-in – are stressed and pressed for time as they work on the new ad. We learn in voiceover that this was ordered by the CEO and that there’s a large reward if it resolves the situation. Ah-in is, thus, ruthless about rejecting bad ideas – ripping up proposals and even burning the papers to the shock of Eun-jung. A colleague complains that it’s not an issue of bad personality, but that Ah-in is completely crazy. We also get a brief glimpse of an angry Hanna and worried Young-woo as the accompanying text screens explain Ah-in’s MO: “Consider it as a strategy and act like a crazy b*tch.” Chang-soo is patronizing as he tells her that taking the easy route doesn’t suit her. But Ah-in isn’t phased and confidently declares, “I’ll show them why I’m needed.” 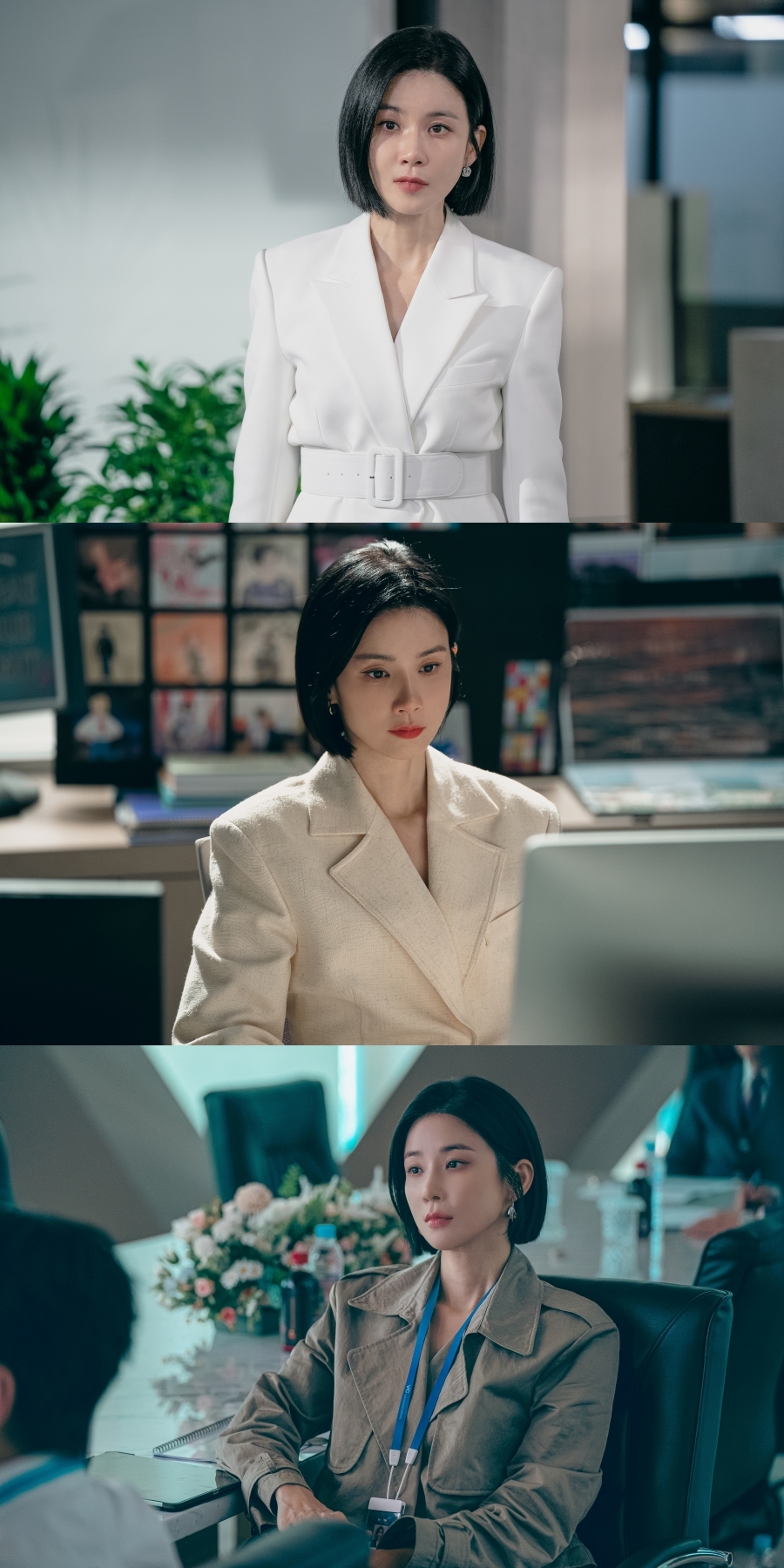 Corporate shenanigans are one of my things and I want this to be done right. I want it to land properly.

Lee Boyoung was such a let down in ‘When my heart blooms’ and Jeon Sonee stole the drama from right under her playing the younger version of Yoon Jisoo.

Is that all you’ve seen her in? That whole drama was boring, though. Especially the adult scenes. Yoo Ji-tae couldn’t save it either. I don’t blame her for not being able to save a boring drama. Lee Bo-young has been fantastic in virtually everything else in the past decade of her career.

@mindy: I liked Jeon Sonee and Jinyoung so much as the younger versions of the leads but nothing else worked which was such a pity as the story had potential.
And, I will take your fierce defence of LBY on board and won’t reject out of hand her other work before I give it/ them a go if the occasion arises.

It would be tough for Bo-Young and Ji-Sung acting together in same drama again, right? Sighhh 😮‍💨😌... One fine day, dramaland...one fine day 🤞🤞🤞.

Good. She should stop or stay away from the over cliché romance dramas. They don't work anymore, as most K-drama especially romcoms and melodramas don't bring in the ratings and their quality is getting from bad to worse.

Lee Bo Young looks fabulous! I like the short hairdo. She's the only draw though. Everything else is meh.

Alright, as an ex-advertising agency industry worker, I'm kind of glad we finally got "in the spotlight" by these K-drama producers. Advertising is a labor and brain-draining industry, I remembered back in my agency days usually I logged over 10+ hours per day to my timesheet which we will charge later to our clients. The creative and account team had it worse, with some brainstorming and pitching sessions can last up to 2AM in the morning (YIKES!) Apparently these creative shenanigans works better in the night, and with some cans of beers too, tee-hee.

I have a love and hate relationship with that industry. We burned out very quickly, with some, including myself jumped ship to another "slower" paced industry to embark on a more normal life as soon as I got the chance.

Back to this drama, I'm hoping a "Misaeng" style office drama (I FREAKING LOVED THAT DRAMA), and to be perfectly honest, it suits the pace and life of our industry with all the micro-office politics and drama, the hustle and bustle and also the frantic pacing of our daily works, but our lives are a bit more casual than these sales team in One International (no ties at office! you can work with your slippers!)

I really hope this doesn't boil down to makjang and chaebol style drama, which they often do, because It really doesn't suit ad agency lifestyle and work, we are a bit more bohemian, a bit more non-conformist. After all, ad agency workers are creative people. Suits and ties does not suit us (that's why this series' trailer got me ... a bit iffy ...)

*one last thing : female CEOs are very common in ad agencies, I wonder why they make it such big fuss on the synopsis/trailer? Is it because of Korea being a very patriarchal society?