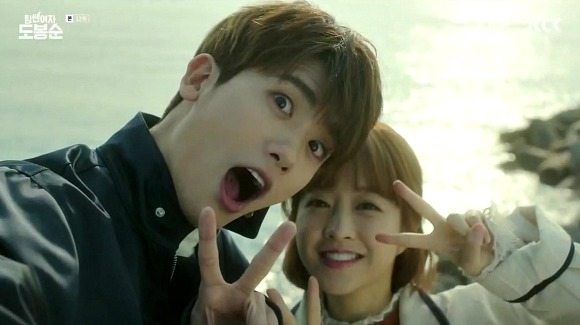 It has now gotten to the point where I need a packet of throat lozenges next to me when I watch this show, as I’m about to lose my voice from either happy squeals or terrified shrieks. As usual, Strong Woman has us waffling from one end of the spectrum to the other, with no breaks for a little grey area downtime. Between our swoon-worthy main couple and the psychotic kidnapper, I never know what this show is going to throw at us. All I can say is: Hang on to your emotions, kids, it’s gonna be a bumpy ride…

END_OF_DOCUMENT_TOKEN_TO_BE_REPLACED

Read the rest of this entry »

An Indian here too. I unlike you guys found the scene surprisingly funny. They had a Korean guy, wear a bindi , and act like a bhuddist monk, with a muslim name, giving a Christian style baptism and serve naan. There was nothing accurate about the entire sequence, which was hilarious to me. I don't think the intention was to offend or stereotype, but rather they played at India's rich cultural diversity. But the bit about Indian govt. exiling him, that was totally Tibet/China conflict and in no way linked to India! Still the scene though unneccessary, it was hilarious to me as an Indian viewer.

Yea. I'm a Muslim and i didn't find those scenes to be offensive. There's nothing in a name really; in my place there's a Catholic with the name Noor, and a Muslim that maintains his/her family name e.g. Lee.

Same dude. I thought the point of the scene was to be so absurd that there was no connect to reality. It is not meant to be offensive, tbh I was more put out by the domestic abuse.

The Viki subs I read said "do you know naan?" Which I took to be a reference to the famous Korean movie (or was it a commercial?) quote, "Do you know xxxx?" ... which I can neither recall specifically nor identify at this moment, auuugh! So this is a fairly useless comment unless someone can fill in what that real quote is and if it makes the reference any funnier.
At any rate, the whole gangster thing is beyond tired out for me and I wish they'd all get religion, go straight into a monastery and never be heard from again.

@Sobriety Thank You for the Naan explanation ! It's actually pretty sad that I didn't get it, as Korean language borrows a lot from a South Indian language(Tamil), of which I'm a native speaker, due to the influence of some settlers way back in time. The way they use nan in korean is the exact way they use it in Tamil too, yet I failed to get the joke.

@FellowTamilSpeaker Hey Chingu! Glad to meet you here too. I believe that I'm also quite well versed in Malayalm if I say so myself ;).
There are many similarities between both the language which came as quite a surprise to me when I first started watching Korean shows! It adds that extra element of familiarity with the culture.

Good to see a Tamil speaker here.. I am basically from Kerala but brought up in TN so quite fluent. And one of my friend told me that Korean and Tamil has many similar words. Like "appa", not exactly Amma but "omma" and many more maybe..

I agree with you.