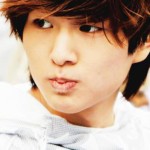 Han Ji Pyeong was a believer. He believed that the more he sacrificed the more he gained. Money bought success. Tears were his enemy. And yet, seventeen years after he left without looking back at one of the most important parts of his life, here he was, standing in the rain, soaked to the bone, staring at that one girl who turned his entire life around. And guilt was the only thing he was feeling.

He took a step towards her and paused, his entire being trembling, because she took a step back. Unconsciously, it seemed, as she was surprised herself. He wanted to reach her, touch her, brush her tears away, be the person he couldn’t be for those seventeen years; her friend, her love, her soulmate. And yet all he could do was watch her. He watched her cry. He watched her throw her entire life away and run to him with hope. And he broke her heart. Her eyes were red and she was staring at him with so much anger, hate, guilt, fear, sadness. He couldn’t pinpoint a single feeling: she was a mess.

He took a cautious step towards her and breathed when she didn’t move.

“Don’t” she growled, her entire self trembling.

“Don’t” this time, waiting for his reply.

And another. He was so close he could feel her breath on his face, as she stared at him.

He felt her fists ball up against his chest, punching him softly at first, then slowly losing control until she balled her fists around his shirt and pulled him closer, so close that he felt as if they were one person. He felt her breath against his ear as if it was his own. Their hearts beat in sync, playing a tune only they could hear. Her cries softened and she gave up all pretenses and pulled him close, hugging him in a way it was doubtful whether she’ll ever let go.

I hope its not a red herring

Nicely done, Heartoppaya! What a way to pack so much feeling into that initial K-drama hug! If only Han Timjangnim had been ready emotionally to take that step…