I think ep 12 will go like this given how ridiculous Shin Lee can be with their poor and illogical character development ability (yes, I’m still traumatised to this day with how they failed to develop Chilbong as a character on his own and outside the love triangle, and also how they suddenly swerved with Binggeurae’s development too) 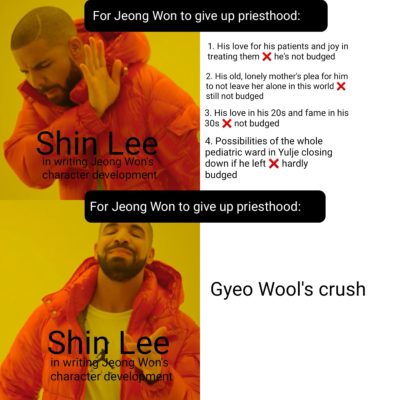 Based on how ep. 11 of Hospital Playlist went and with the content of the preview for ep. 12, I’m giving up on the hope for Jeong Won to have a consistent, logical and organic character development. It seems like they’re pushing the narrative that he likes Gyeo Wool romantically(?) and might even give up his priesthood dream because of her???¿¿?? When they barely have any emotional connection, except for a good mentor-mentee development?

I have no problem if they are romantically developed after his priesthood issue put behind him for good, FIRST. I mean they are now finally comfortable with with each other and it is looking promising for romantic development between them if he no longer pursue his priesthood dream.

But by making him waver because of her, like how Ik Jun is suggesting, it makes Jeong Won to be developed into some inconsistent and stupid alien or something?

If we’re to see the previews, it seems like it will focus heavily on GW x JW instead of an exploration on his own personal issues and dilemma so I have no hope left for his character development to be consistent, logical and satisfying to watch.

Because of how Jeong Won’s character and personality is already established, I find it hard to believe for him to waver for reasons less than those heavier concerns – leaving his old lonely mother alone, leaving pediatric surgery and his patients that gave him the most joy, leaving Yulje’s pediatric surgery department to collapse if he leaves, and not even his love from his 20s and fame in his 30s is as bright as his priesthood dream. And they’d make a crush being able to topple all that and let the hopeless romantic notion of ~love conquers all~ happen?

The only thing I’d believe he’d give it up is his own realisation he truly can’t part with pediatric surgery, or an outside force that’s totally out of his control over – sickness, accident etc.

Shippers will accept him wavering because of her with open arms no matter how inconsistent his characterisation might be, so long as they get what they wanted.

I seriously think he has no romance concern in his head atm as he’s bogged down with more heavier and complicated issues to deal with, but if Shin Lee made it that way then I’ll just 🤷‍♀️

If he wavers over GW’s character, I want it to be because there’s a shortage of pediatric surgeons and he now sees how he can be a mentor to one. That he likes her abilities and dedication as a surgeon. Not her as a woman. (But hey, I don’t think that’s how this is going to play out)

All along, I’d hoped his dilemma would be over the pain that being a doctor causes him, as we saw in the early episodes, and that maybe he’s running away from that responsibility to become a priest.

I am definitely in the minority but I expect to see Jung-won to pack his bags for Italy.
Jung-won has roomed with straight shooter Joon-wan for years, right? Unlike dealing with Ik-joon (believe me I love the guy), I think Joon-wan would tell Jung-won to do it. He is the one of the 5 that can make decisions unemotionally.

I dont want him to pack his bags but i dont want him to stay because of a crush or romance that we havent seen develop on his side for the past 10/11 episodes. But then Jun Wan/Ik Sun also came out of nowhere so yeahh..not much hope there.

Again, I completely agree with you on this. You were spot on about the season one finale. I thought they will be better and learn from their flaws from their previous series. I guess not. Watched this hoping they will redeem Chilbong’s wasted potential, look at what they have done again. They even have 3 seasons to manage Jeongwon’s arc better. But no, they refuse to do so. I guess I’ll never understand how can they can create characters with great potential but waste the opportunity to do so. Disappointed but not surprised, I must say.

I like to think of it as bricks building up to His hesitation inside, with Gyeo Wul being the last straw. Well. A girl can dream. 😁

This is also how I want it to progress. That all the other 4 reasons now has balanced his dream to be a priest, and his feeling or admiration for Gyeo-wool served as the last straw that finally tip the balance towards him staying as a doctor. Yep, a girl can dream.