Chief Hong and PD Ji. Them together is so much fun to watch.

After 3 eps of Squid Game, I still feel meh about it.

Ep 2 is the worst. It’s never a good sign to give me, as a viewer, backstory right from the get go, and to show them back to back together in one episode. Why? We know they are in debt and suffering already just from ep1 alone. Why make us viewers go through hell as well?

It’s also difficult for me to root for the characters. I cannot sympathize with the main lead if he acts like a kid. His kid doesn’t deserve him despite him loving her. Sure he got fired. Sure he lost someone at work. But the actions he took after that are just bad. Also, the nerve of him asking his ex for money. Yet he stole his mother’s money for gambling?

Grotesque violence. They are simply showing off with the violence. After killing 256 players in one episode, what is even the point? They will kill more as we continue, and we would never know their story. They are simply extras who play dead. And that’s a shame. I prefer the violence in Alice in Borderland and D.P., as they make sense in the overall story.

So yeah, I don’t know about this show yet. Maybe I will watch two more episodes to see if there’s something to look forward to.

You summarized it well! Usually, I flinch at violence, but this did not make me. They just seemed like characters you need to get rid to complete a quest🙄🙄

Awww. And it ended.

It definitely feels like a goodbye. So, thank you Hospital Playlist. You have been my consistent happiness every week.

Midway thru the finale:

Ooohhhh HospPlay, you waited til the final episode to give us all these difficult patient cases. It’s a thrill to watch and somewhat unexpected.

I really really want a story centered around Intern Hong Do in the last episode. Please. 🙏🙏 They keep teasing him in every episode. Give him some good arc in the finale.

I hope they wrap it up well without leaving an important thread hanging.

Between hongdo and yunbok, i bet hingdo would be the better doctor out of the two. I mean, junwan, the demon prof, already adore him so much 😂😂

That’s what I get as well from this season, that he is going to be an excellent doctor in the future. And all that teasing shows how they see his potential down the road.

Poor Hong Do trapped in the lift 😂 this s2 def belongs to Hong Do, kinda miss his twin

Okay, time for a little nostalgia.

Why does Kim Seon Ho looks so much like Ji Chang Wook? I only saw one ep of Lovestruck in the city. And everytime Chief Hong surfs, I see Ji Chang Wook.

He is my weakness.

😆 I do see some resemblance.

The surfboard and that’s it. Oh and the wetsuit.

Once in awhile from some angles…

KSH does have his own charm. That dimple is a killer. And there’s something in his eyes. His voice too. My goodness.

I like both, but if I was forced to make a choice, it would be wookie.

Yes, girl! Who cares if he gave you the sweetest piggyback ride. The shoe comes first. Lolol.

I would be so frigggin\’ pissed at my future Kim Seon-Ho for making me a taxi driver with no permission. Thats hella rude.

Still, I would want himt to continue delivering my package.

I really need to stop visiting Koala\’s Playground website. I don\’t know why I keep going there. 🙈 The posts are just full of drama and negativity.

Those posts do get the views.

It is a negative place. I didn’t even like Nevertheless but it got a bit much with the almost daily negative Nevertheless and Han So-hee posts for a while.

And it’s funny that we seem to keep coming back there, when we know what we will get. Smh!

Well, on my case, it’s because I saved the site unde quick access right besides dramabeans. So, it is so easy for me to click onSMH!

I have now removed it. Yes!!

What, dare I ask, issues did they have with Han So-hee?

KP is a cesspit of misogyny and negativity tbh

Out of curiosity, I just went and checked it out. Came back here to say that I should have listened to you.

It’s DB if the entire website was run and frequented by gossip mongering jerks who have no fun in their lives.

That website is a cesspool of harmful, misogynist, tabloid-y mess. I swear the writers have a vendetta against actresses. My life has been much better even since I stopped going there.

Don’t be fooled with that baby face of Jung Hae In.

Prepare yourself before diving into this worthwhile series. 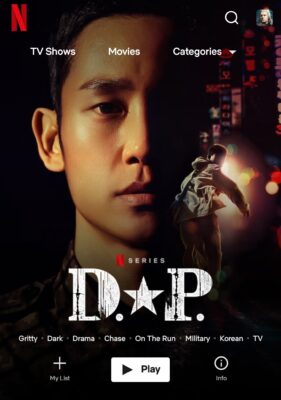 That would linger in my mind for awhile. So many stories in the SK military that need to be told, while hoping no tragic stories happened prior to it.

At the end of Hospital Playlist, there\’s a slower version of It\’s My Life playing in the background. Who was singing it?

Okay, those burgers they ordered from McDonald\’s. Sounds delicious. Willing to try them out when I visit Korea next time.

:O its McDonald’s those burgers are everywhere..aren;t they?

They call it different in the show. They mentioned burgers I’ve never heard of.

Mcdonalds have local versions of their burgers. So it will cater to the taste of the locals. I have seen it in the asian countries I visited.

Yup sounds so fancy for McD! We only have chicken n beef variety here.

Seoul Tourism, we are trying to move on here. No need to remind us of that line in order to visit Seoul. 😂

I may not be as vocal about it, but Hospital Playlist continues to be my comfort watch every week. It gives me warm fuzzy feelings each time.

And I\’m grateful for it. Thank you Hospital Playlist.

I’d be more warm and fuzzy if they cut the episode down a little.

Ughhh, I can\’t seem to move on from Nevertheless. It got me so bad. I keep on refreshing mydramalist comment section, and replying to viewers hoping to understand my POV. SMH!

I\’m like Na-bi. Doing the same thing over and over again, expecting different result. I\’m hoping it will just be thru the weekend. Coz, I need to move on and forget this show.

Maybe, I will continue with Light On Me or Downton Abbey.

I will remember you PD and Writer. You will not get any more viewing minutes from me going forward.

You did Na-bi dirty. You did us viewers dirty. I will never forgive you for this. 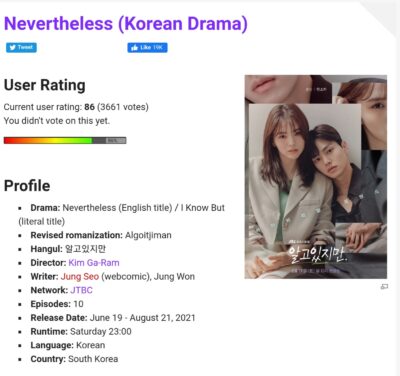 Wow. This show does have pretty camerawork.

Nevertheless, this show is still stupid.