I’ll be honest.
Most of the time I have no idea what is people’s obsession with big dreams and ambitions. It looks exhausting, loud and stressful. It’s not appealing for me.

So if someone says that they don’t understand people that just want to chill, I get it. It probably seems boring, lazy or something.

You can give your opinion and hear the other person’s perspective. You can say that kind of life isn’t for you.

BUT when you directly attack something that’s important for something. When you question their decisions just because you don’t like it or understand it, that isn’t cool.

You can ask your friend if he’s happy. If he doesn’t regret something. If he would change the past if he had a chance. You can ask him how is he feeling.

You don’t have to attack his lifestyle just because you think “he can do better”. I know it’s because she cares about him or wtv, but it just annoys me so much.

Why do they always put their worries over the other person’s feelings. This isn’t about you, it’s about them.

And know that I think about it, even if he wants happy with his job/life, that question was rude as hell. It would make him feel worse.

Well, thanks to her now I feel so grateful for my friends. Even tho they never understand wth I am doing with my life, they never make me feel bad about it. They understand we’re different. 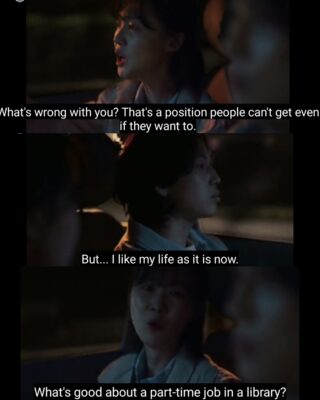 #WrongTitleThisIsMoreLikeGettingAbussedByRandomPeopleOnADailyBasis👈 Love this.
I am not watching this drama as the undertone seemed out of my comfort range and it sounds like I made a good call as so many comments are about unexpected elements of the story.

You are so right about the value of friends who get you even if they don’t always understand your choices.

I think things will get better now that the FL made some friends, but most of the 4h I spent watching the show I was annoyed, angry or frustrated tbh.

people need to get acquainted with the estonian nature philosopher Fred Jüssi. He has an untranslatable word “molutamine”. Loafing around in a positive way. The brain needs time to rebuffer. Our backlog in the modern world is huge. The greatest problem is we create a to do list in our mind and think we have to accomplish everything in it. Thats not true. the real trick is to learn to choose what really needs to be done. and thats where most people fail. They just keep doing and doing but they lack judgement so they waste time on totally pointless things that will have no effect on anything. It is quite like in taoism. You are on a Way, you do not need to achieve every goal. You do not need to pick up every shiny pebble. and the second goal of loafing is letting the nature talk to you. going somewhere and refraining from taking immediate action. a person goes to the forest, it either takes photos. it makes a fire. just stop and listen, observe,feel.
also, a fulfilling career is not where you are constantly busy and making money. it is something that allows you to be yourself, and secondly, it gives you enouh time to let your mind wander. Same from a neuroscientist Jaan Aru. Idleness is the key to creativity and big discoveries both about the world and yourself. if we only complete task after task in the normative sense of success, we are robots and not humans. in the end, a human is not a Working Human, we are Thinking Human.

Now I want a big snuggly sweatshirt that says “molutamine” 👏🏽

hmm, it could say… either “Molutamine – the most effective way of doing nothing.” or “Molutaja” [ a person who is doing nothing effectively]. Then it makes sense grammatically

Thanks! I may want to do nothing most effectively but always want to be grammatically correct doing it! 😁

@redfox, can you give us some phonetically correct pronunciations?

you just dont change how it is written. o is o, not ou /õu, u is u not y, ju or ü; and no emphasis on t (not th, just t) – hard to explain, you basically just pronounce all letters as they appear. Mo-lu-ta-ma, not mou-lju-tha-mei

although, there is the higher / lower tense pronounciation like L can sound like “l[i]” or “l[jj]” in “Pill” (instrument) and it can sound muted as in “[õ]l” for example in “kola” (junk). it is called “palatalisatsioon”, where one letter can be muted or sharp. You can pronounce either way in “molutama” either mol[i]utama or mo[õ]lutama. I wish I could send a sound clip like one letter is sharp, narrow and the other is muted, wide

Thanks @redfox! I appreciate it! Happy Holidays to you and yours 😀

I have a similar way of thinking.
I don’t like I HAVE to be productive all the time. I don’t feel like I have to be the best at anything.
I like peaceful stuff, and being ambitions/having big dreams doesn’t seem that chill. So that isn’t for me.

As someone who decided to stay at home when I became a mum (I’m a mum of two), even though I was young and I had my Bachelor’s Degree in Advertising, I can relate to your feelings.
I know many people think I made a wrong decision but I have never regretted it.

Like DAY6’s says, “live your life”.
I’m glad you decided to be happy according to your standards and not other’s.

I immediately thought of Woong in Beloved Summer when i read this. I liked his dream – to do nothing/stay still. As long as you’re not troubling other people, i think living a simple life is perfectly fine

I was so happy with his character until they did…. That.