Our Beloved Summer
What I liked about the drama that kept me watching till now: ✨
The vibe & aesthetic has been lovely so far, the color tones, the setting, the cinematography were pretty. The music is overall nice too. So it was a visual treat.
The friendship between Ung & Ji-ung. It’s nice 🙂
What has irked me enough to vent out here on db after ages:
First of all, the absolute lack of communication between the leads till abt ep 9(?) had been super frustrating.
Didn’t care abt YS ever but wow she just shut up like a clam, & Ung was so vague abt everything! This is romanticized in dramas but tbh things never ever work out on their own without communication.
i just liked to see Ung work in his studio & was hoping those 2 would actually talk about stuff that matters & i didn’t care abt them getting back together, i mean either way it was fine BUT that was nothing compared to what happened in the latest eps like why did even Ung need to have a sob backstory?????? That ep just left me??????? 🤨🤨🤨
I mean isn’t this trope getting too old after getting reused so many times. Like every set of drama parents who are nice are adopted, & only the awful drama parents are the real ones.😒
I don’t….feel pity for those characters anymore. Seen it even more than Love triangles & TOD put together. 😐
Not trying to be insentive but Ung’s story didn’t have to be so pitiful, i was rooting for his choice of life even without the sob backstory thrown on my face so late into the show, it was absolutely unnecessary because yes a person can wish to have a laid back life, be reserved or feel lonely at times without a childhood trauma.
So now what, we root for the OTP to be together because their uhh…sad stories make them a couple????🤦

Is this a Melo? Did I miss it somewhere? I had cried through Bach drama, sniffed sometimes through Weather drama but man it makes no sense in this drama. This setting is really getting old. You know what would be fresh, the characters having *not* a sob backstory but still have enough depth to make audience invested in them.🙇

Also the pretty music & setting will make it seem like it but taking so long to resolve things between them despite the apparent never faded love in their hearts is romantic only on paper not in reality. (Plus they haven’t yet talked abt the last break up which was so bad, also ohmy, did YS dump him without explaining even tho she knew abt his son story by then???? Ohmy ohmy i agree with Sol-i unni, they’re a mess )🤷

Also why….did Ji Ung like YS? Love at first sight? Just like that?????????? They never even got that close until the current timeline. Was this setting necessary? What is this, Twelfth Night? Why are the drama universes so small where everyone has to has a crush on someone. Why are love triangles/squares/pentagons still not ditched out of writings.😑

And will i keep watching after venting out so much here? Yes ofc, since I’m already past the halfway mark, might as well finish it. Can’t believe my frustration led to me rambling here. I didn’t even make happy posts when I was enjoying Run On last yr…
😌

To all the writers of this drama 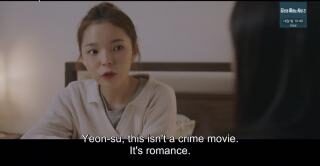 Ok she didn’t know abt his abandoned story. Epilogue confused me nvm.

Sol-I has become my favorite character in this show, she’s the only one with a good head on her shoulders, including grandma.

I feel you. I’m rewatching Cunning Single Lady and they have a similar synopsis (used to date/were married, had an awful break up, they meet again -the dude is now famous- and they start to work together), but man, there was more communication and stuff happening in 5 episodes of CSL than 10 of Our Beloved Summer.
I really don’t know how am I supposed to buy their love story if there isn’t one.

Haha so true – I wish drama writers would realise characters don’t need a tragic backstory and they don’t need a childhood/ fated connection either! Normal people falling in love can be entertaining – there are plenty of potential pitfalls between two normal, different people!!