It seems like I’m the only one watching Netflix’s Holo Love but the premier was 💕 and now I’ve godly zoomed through 7 (out of 12) eps.

This was a fun one!!! I watched it back when it was first released =)

I got published 🤸🎉.❤️
Definitely an amazing start to the new year!

Even though it’s not New Year yet for me, I want to wish all the incredible beanies an amazing start to a new decade! (gasp)
I hope 2020 brings a lot more joy, laughter and bliss (definitely more than monkey king below) ^_^ 💕

Wishing everyone an incredible festive season! ❤️🥳
P.S that’s my tree below. It was my first time doing a colour theme and it’s way harder than I thought 😂 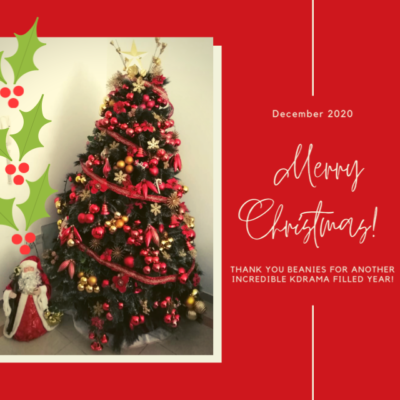 You did well ! It’s a pretty Christmas tree !
Happy Holidays !

It’s beautiful and looks like it took a lot of effort. Merry Christmas!

Ugh One Spring Night with all the feels and love and talking and being honest and imperfection. ❤

urgh. the cuteness. love is so pretty.

I downloaded episodes of My Fellow Citizens to watch when I’m miles from Wifi and so far it’s keeping me crackling. Siwon’s face is pure elastic. His wife is <3 and Kudo Hina (^_^) is extra.

Why you should watch WWW: Search

I’m sorry, I need this epic-ness on my wall.

I just finished WWW: Search and I’m at a loss for words. This drama was utterly spectacular with incredible empowerment, characters, development, aesthetics and a stellar OST that I’ve had on repeat. Usually when I’m done with a kdrama all I can think about are the loose ends and lost potential. But WWW shocked me by being utterly amazing in every aspect. I relished the realistic dialogues, the engrossing work place dynamics, the changing alliances and brilliant details. I know this drama isn’t one for everyone. I’d personally classify it as Josei (a Japanese manga classification) instead of straight-up romance. All I know is that this drama was bliss for me, down to sleekness of it all, the epic trope reversals and the mindblowing OSTs that suited every mood under the rainbow. I’m happy with the way it ended but sad to let it go at the same time.

Same. It entered my top 5. I have no words to say how much I loved it.

Josei is a brilliant classification for this show, indeed!
my only qualms with the show was actually the very same beautiful cinematographic shots you have there: did every single one of their outdoor encounters have to be of such unrealistic epic nature?? LOL
but yeah. Great Josei.

The moment I take a break to catch up with real life, Dramaland decides to throw 1058839 premiers at me on top of my billion drama long To-Watch pile.
How do I keep up 😭😰 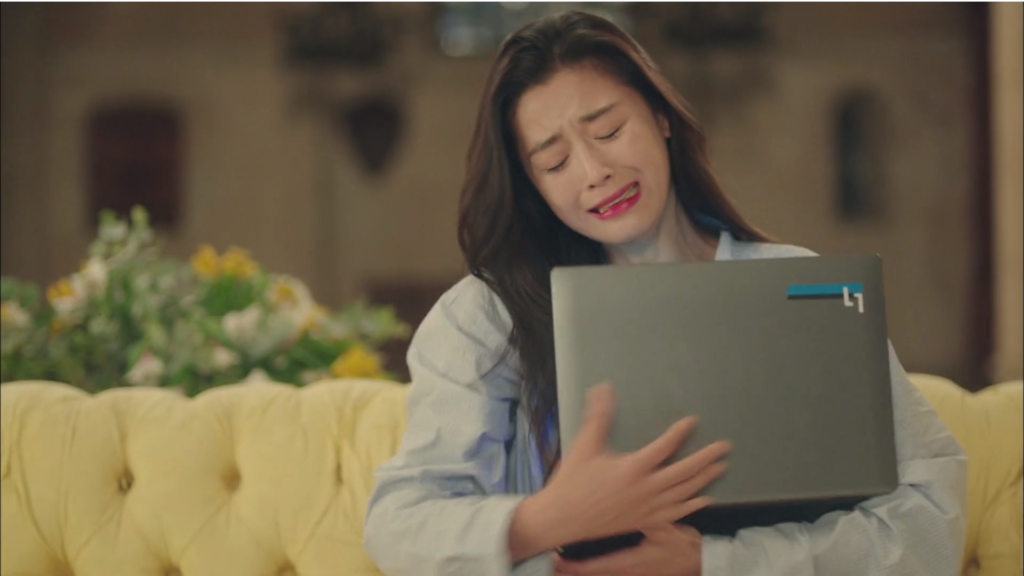 Sleep is for the weak.

At least, that’s what I tell myself.

No one will be able to keep up

I don’t. Fortunately most of them are not my kind of fare. 😀

Finished my exams (mostly, successfully) !!! Thanks for everyone’s incredible wishes and motivation. 💕💕

So I have a week to cram up for 3 very important finals, one of which contains almost Einstein level mathematics, attend 2 interviews for next year, submit all my formal documents and complete 1 shift. University stresses the heck out of me. Mood = fatigue.

Fighting! You can do it!
Remember to sleep and eat well. Oh, and drink enough water!
It’ll soon be over and will all be worth it (hopefully)!

You can do it! Just take it one step at a time.

Good luck! Sending you good vibes. I remember being stressed out of my mind at the end of term and it was never fun. Do you get a small break after before diving into whatever is next? Be sure to take care of yourself during this time too.

Good luck! Sending good beanie vibes your way. May the odds ever be in your favor. 🙏😹

You can do it!

Sending you good luck wishes! You can do it! 😊

You can successfully go through it 😀

I had originally sent a submission for the theme of the month but since I wasn’t published I thought I’d share my favs here, with some of my graphics to spice things up.
PART I
The best mini dramas make us care about the poignant characters that grace our screens for a few hours. They manage to make us feel for the tiny worlds that flash by in a couple of episodes. Binggoo is one such drama. Instantly within the first few seconds we’re catapulted to a boisterous 1979 with The Ronettes’ ‘Be My Baby’ playing in the background whilst a love-struck man runs to surprise his girlfriend.
Binggoo was a sweet, fantastical ride that handled time travel with a deft hand by creating characters we cheered on and teared up for because we were so utterly invested in their stories. It’s one of those few mini dramas that detailed their mains with snippets of back stories, realistic motivations and troubles, and growth arcs that left us stunned. Love was painted in its finest with the eager-eyed invincible young love between our star-crossed lovers to the devastating familial love that pains when family fades away or to friendship that leaves a mark even decades later. It’s a fun zippy mini drama that I’d recommend to anyone who’d like to sit back and chill with a show that’s as softly sweet as a lullaby. 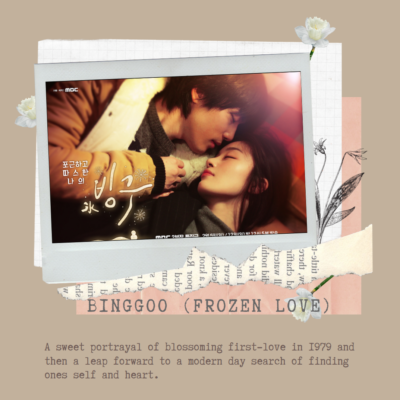 These graphics are so beautiful!

I loved Binggoo! Man, now I miss Mori/Tae Swoon. I hope he is recovering well.

Binggoo was such a cute fluffy gem.

PART II
Buzzcut Love was a mini drama that I’d class as sunny, optimistic and ride you could breeze through despite the fact that it dealt with cancer. Polar opposites, I know. Yet, Ji Yool wedged her bubbly self into our hearts from the very moment she exclaimed ‘I love it’ as she stared back into the mirror at her electric, almost eccentric bright orange buzzcut. A whirlwind of a journey that covered loving oneself, feeling vulnerable and experiencing the bliss the freedom of life gives, it’s an unforgettable adventure that leaves you mushy and grateful. 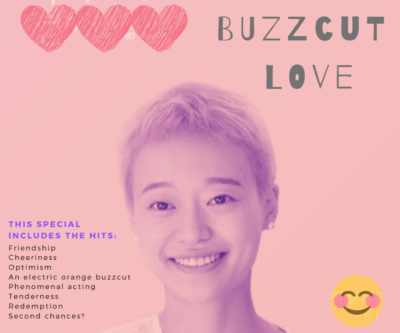 I’m probably bending the rules a little, but I couldn’t not include Girls Generation 1979. Maybe I have a thing for 1979, but at 8 episodes (probably a midi-drama?) this was a cracktastic swirlie of laughter, friendship and the pangs of growing up whilst dealing with being a hot-blooded teenager during an uncertain time. The drama was whimsical, heartwarming and slice-of-lifeish which featured some of the best decade music hits. Sure, Jung Hee wasn’t the most selfless or loveable heroine, but she was realistic as a teen whose world revolved around a crush who didn’t like her back. The romance in the drama was a relay race of tag, (you’ll understand if you’ve watched it) but it was also sweet and endearing.
The social attitudes were so different back then and the drama makes it a point to create this old ambient atmosphere by driving in the different perceptions using true-to-life posters, attitudes, a curfew, war prep classes etc. So again, a recommendation I’d whole heartedly give. 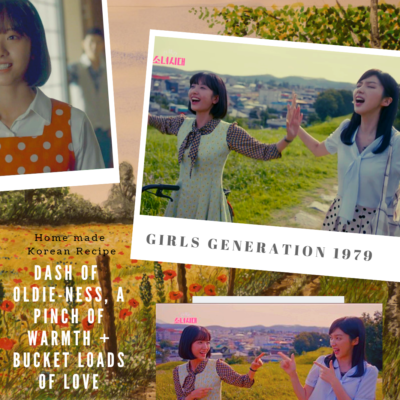 Had Korean food for the first time!
Started off with steamed buns with bulgogi and ended with bogum bibimbap. 🤤🤤🤤 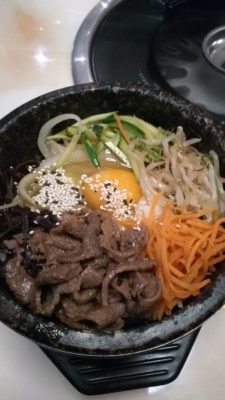 Nope 😊 But it was very filling, nutritious and yummy without being greasy.

Celebrated today by gorging at an all you can eat Chinese buffet. After 3 plates, 2 hours and 2 ice creams I’m stuffed. I didn’t even bother with chopsticks after plate no.1 😋 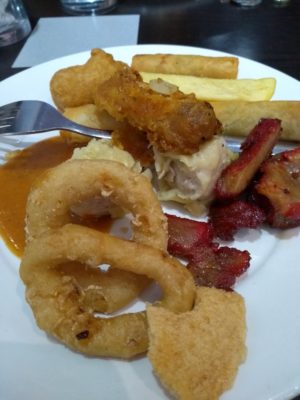 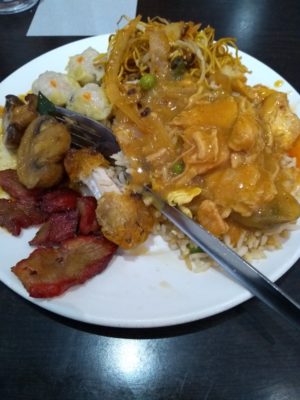 So I just finished IU’s first short: Love Set and I’m 99% sure she and Bae Doona have some romantic history between them and IU is still in love with her that’s why she opposes the marriage. That’s why there was so much symbolism: the peach, the sounds, the sweat, the blood down her leg, the linger of the thumb touch at the end.

That’s what I got from it too. I’ve watched up to the collector but I don’t think I’ll watch the last two

Oh? But I heard the last two were the best from the set haha

Ah really? The first two weren’t my taste so I figured I wouldn’t enjoy them

Each ep is from a different director so I think we’re supposed to consider them separately? But that’s from what I’ve seen mostly from reviews I’ve yet to watch it haha

That was my take too. I loved the opening scene and thought it had some really nice shots.

Woah I never thought of that but that makes so much more sense!

@frabbycrabsis It seems like our interpretation was very off 😂

Ohhhhh, you know what, that makes ten times more sense. You star, @fencejumper!

Been of DB for a while so I jumped into Light In Your Eyes expecting a time-travel romance but got a slice-of-life, bittersweet realness mixed with incredible writing and a thousand feels. I’m a mess but I love it.

There, there. *virtual hugs*

Secret Terrius is so adorkable! 💕 Just the fluff I need when I’m about to go cray cray from stress.

I liked this silly show so so much. I even miss it.

I never did finish that after Dramafever…

i want to watch this show so bad but i cannot find it anywhere!

I have to settle for the bootleg sites 😭😭

Time to sign off for New Year! Here’s to a better kdrama year, an even greater DB community and more love all around. Both in kdramaland and in all the lovely beanies lives. DB has made my 2018 spectacular, so here’s to an even greater 2019!💖🤗💖🤗

Happy new year to you!

Sorry, where is the 1st gif coming from?