Not related to kdrama nor kpop… But ever since a beautiful love story had bloomed, I have always thought of @azzo1 and that feeling of butterflies when I listen to this song.

Congratulations, Azzo and Mr. Azzo! Wishing you both a long and wonderful married life!

Mr. Azzo will be really happy with this title! Not kidding 😂

A nightmare woke me up in the middle of the night.

I dreamt that my boss and I were chatting over Skype, like we normally do at work. He tells me that he and his wife were watching kdrama again, and that he found this \”kdrama site\” where people would comment on them. Look, he says. There are people with such and such handles, there is this @halfmoon, and they have been saying such and such about these scenes. [ Visually, in the chat window, I see screenshots of what he\’s talking about: some types of Bbaya scenes from Pegasus Market and some scenes involving Xu Kai ]. I freak out and wonder, what do I do now? Do I confess I\’m halfmoon and share the fun with him? Hell, no!>

Then I woke up, freaked out a bit still, and realized it was all a dream. Phew.

Here’s a cup of tea. Keep breathing…
That was one bhefjuggkckr7y dream…

We all know DB is on the internet but we all semi freak out at the idea of people knowing our activity here 😂 obviously that is the reason I don’t fangirl on facebook, I have my owm little anonymous fangirl corner here.

It wouldn\’t be Pegasus Market without Kim Byung-chul.

I just watched half of the 1st episode of Vroum Vroum Pegasus Market , and I\’m not feeling it. Maybe the writing team is different too?

Never Twice (just started episode 10) — Hae-ri needs to stop screaming. Woo-jae should stop dating her too. He deserves some respect.

I don\’t know if anyone here would know it, since the movie is quite an old movie.
But hearing \”You Call It Love\” in the kdrama \”Never Twice\” (\”No Second Chance\”), was such a blast from the past by reminding me of the movie \”L\’ Étudiante\”! Now I\’m feeling a bit nostalgic!

— Aww, I can now imagine In-bae being the young girl\’s overprotective father figure / uncle…
— Louis Vuittuuu ? lol
— I didnt expect that person to catch the discount man!
— I loved the ending credits when they showed the webtoon character (if any) each actor played.
— did he really do that to his hair?!
— I miss the Bbaya choir and dance shows.

I loved Pegasus Market.
Eventhough it was just 12 episodes, I feel that it was the proper length. The last episode was uneventful and we got to wrap the story up.
I\’m not sure if the spin-off would be as good (will Kim Byung Chul join?), but I\’ll definitely give it a try, if it\’s available and subbed.

I couldn\’t take a screenshot of the scene, but I\’m going to print this out and post it on my cubicle wall at work… to remind myself to just do my best, not the impossible.

I finished episode 8 of Pegasus Market.
I previously saw a spoiler about Manager Moon\’s mother.
I also remembered how one of the female characters in Melo Suits Me cherishes her loved one (in episode 1).
I prepared myself throughout the first 7 episodes.
But I still ended up bawling my eyes out.

Pegasus Market — I just finished episode 3. What is this show*? Who comes up* with these ideas and stories?

*in a good way 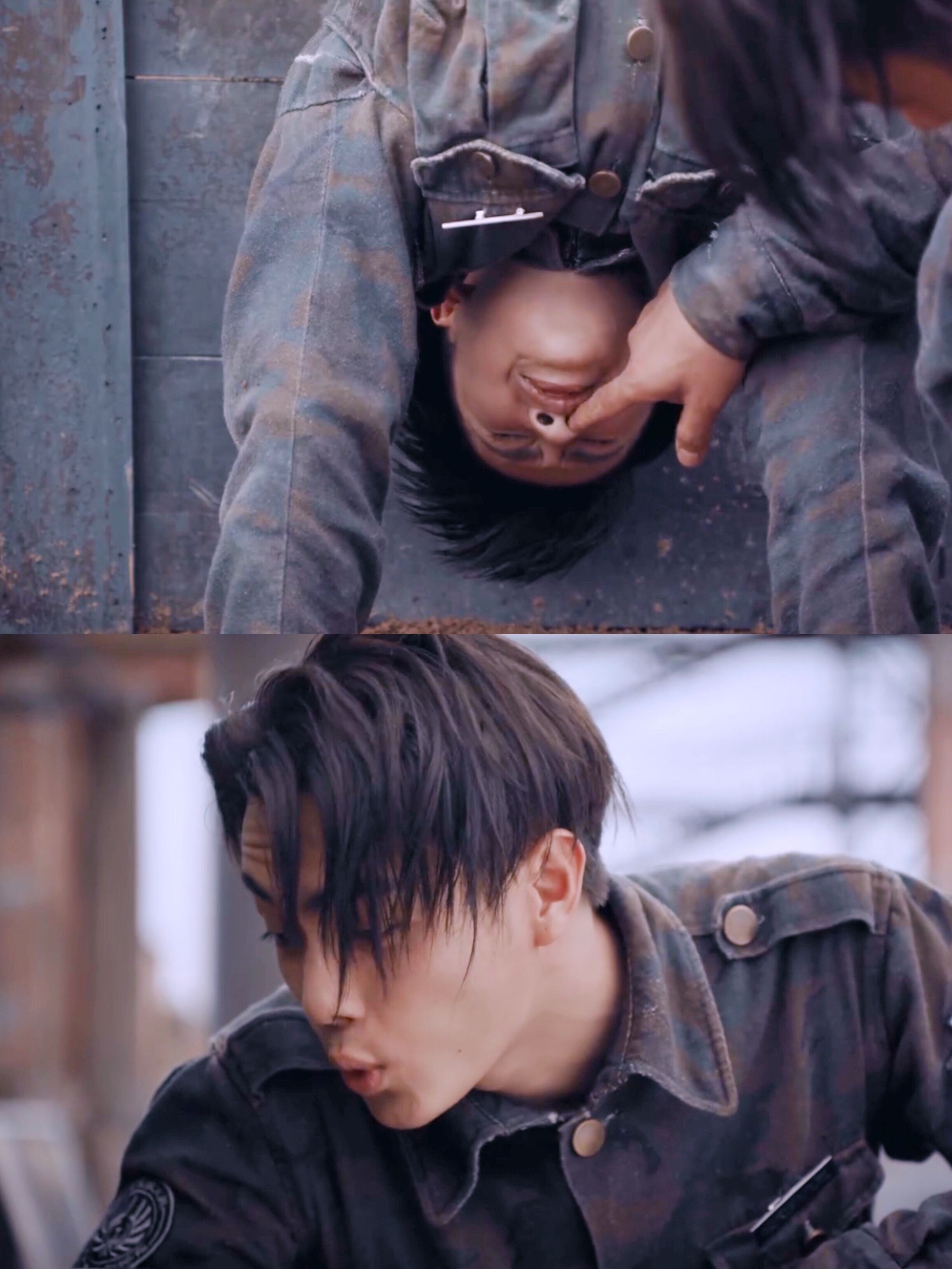 Xu Kai’s new drama, titled, “Once Upon A Time In Lingjian Mountain” began airing this week, on iQiyi (but I’m sure there’s subbed episode floating somewhere on the internet if you don’t understand Chinese 🙂

Huehhehe He’s such a bully!!!!!!!! But at the same time, he was always there ready to help when she needed one…

That same night when they were the only ones had to train as punishment….

Their first karate class when Li Wenzhong attacked her from behind; he flying kicked him as retaliation…!

And this all happened before he even figured out her real identity! Sigh, Gu Yanzhen………. 😪 To love you in this lifetime is not enough.

Question about Extraordinary You , ep 23-24.
About the sentences that Dan-oh, Haru, Baek-kyung are currently repeating.

Are those the same sentences spoken on stage or in the shadows during their previous time/life ?
I couldn’t quite follow.

my understanding is that they are repeating the same sentences and re-enacting the scenes in the other manwha, the sageuk.

Right… But were those the scenes from the stage or from the shadow, or both, in the sageuk manwha?

They are repeating the staged version of their previous life in the shadow stage of the present manhwa (Secret). That’s part of their memory of their “past” life. But somehow some of the lines switched from Baek Kyung to Haru. And in Dan Oh’s case, she was repeating lines without even remembering.

Extraordinary You —
How about Baek-kyung\’s brother? Anyone else also thinks he\’s self-aware as well? He had this sad or worried look in episode 8 , and in an earlier episode (right after Baek-kyung announced Dan-oh as his woman at the birthday party).

Self-aware, and probably also a character from a past manwha who has a reason to care about Dan-oh. Maybe her own brother? For sure, in this manwha, Step Brother has a front row seat to how horrible BK has been to Dan-oh, and how deviously their father is using her for his own ends.

There was something odd about him when we saw him at Nam Joo’s birthday party. He did say he likes Dan Oh and he wants her to be family… perhaps your theory is right; he doesn’t like her romantically but maybe he was Dan Oh’s family in another lifetime.

I noticed it in a previous episode when he told Baek-kyung to “be nice to Dan-oh noona”. There was something about his demeanor that seemed to suggest he is self-aware.

So I am not sure if he’s self aware but he’s definately someone significant because camera’s have been lingering on him in quiet a few scenes. I first noticed at Nam Joo’ s bday.

😢 I heard a lot of scenes were cut off once again due to censorship…….😭

I think it’s a mix of both. Like @13infamyss has said, they cut out a good amount of the actual romance. I had heard (but don’t know how accurate this is) that they actually filmed a kiss scene but edited it out. I think they were worried about 2 soldiers kissing (even though 1 was a woman).

Bai Lu and Xu Kai are so cute together in the BTS. They clearly are good friends which gives them great on screen chemistry 😍 Which makes sense as they were in 2 dramas back-to-back together.

Yeah that’s what I heard as well, that it doesn’t paint a good picture having 2 soldiers kissing especially at the military camp… like. 💁‍♀️ Anyways this drama came out at the perfect time China is airing propaganda dramas till the end of this year. I can see why it’s heavily censored by the government, but my poor heart 💔 I wish they had released uncut episodes somewhere or like have them release DVD/bluray.

Love them bts. Wish they’d star again in a drama together.

I just finished Arsenal Military Academy.
However, mid-way through the show, I did fast forward a lot of scenes.

My quick thoughts (and SPOILERS) about the ending in the comment.

Why did we end up loosing our dear comrades? 😖 I wasn’t prepared, after sooo many episodes, to end up losing one after the other. My heart was still hurt when the ending came.

I need to rewatch the funny scenes.

OMG, Gu Yanzheng… You and your antics to help Xi Liang Chen… 🙄🤦😂 #ArsenalMilitaryAcademy (up to ep 12 for now)

I am ep 11! I cannot wait till i get to what you’re talking about. Ep 10’s flashback of someone’s sort of romance at the end kind of like drained me lol. I didn’t even know I fell asleep 😭 I’m continuing now!

Ops, sorry !!! I was wrong with the episode # , should be ep 13 with the medical exam scene. Then ep 14 with the public shower scene. In any case, he can be really petty/ridiculous but would do anything to help her.

I’m not into the Chinese vs Japanese and side characters stories much. I wish they had more scenes about Gu Yanzheng’s antics.

@bcampbell1662 Beverly: a while back, you recommended the book \”The Flatshare\”. I just got it and am half way through it. Thanks for the recommendation! I\’m liking it so far!

I’m glad you are liking it!

You know you\’ve been working too hard, when you fall asleep in your commuter train home from work, and dream about Rookie Historian Goo Hae-ryung writing codes/terminology used for your real project at work.
(And yes, I once dreamed about those codes/terminology scrolling down à la Matrix too. But too bad, Keanu wasnt there)

The Matrix is getting a reboot, and Keanu Reaves is set to come back for it

Just marathoned A Moment At 18 up to episode 5… and it hurts! 😢 Poor kids.

I had a nose bleed, as soon as I arrived to my office this morning. I\’m ok, it wasn\’t anything serious.
But my first thoughts were:
1. gosh, it\’s going to be embarrassing with a Kleenex up the nose,
2. wae? I didn’t even overwork like in kdrama.
3. so that’s how they feel [in kdrama]. Hopefully next won’t be IV drips.
4. oh right, maybe I just need to take off my sweater. Weather’s too hot.

5. where’s Oppa to piggyback you to hospital ?

Glad to know it was not anything serious and that you are ok.

Are you in distress?
I’m glad you’re ok.