I can finally put The King: Eternal Monarch behind me. *sigh of relief* I feel as if I’ve just been played by this drama. I don’t know if I’m just dense or distracted by PPL, but this show felt as though nothing had a point and all I’m left with is untapped potential, leftover chicken, and questions:

What was Lee Rim dyeing red in the initial episodes?
Why did it seem that Lee Rim was gathering an army of people who traded lives with their counterparts when they essentially amounted to nothing? (And what did their lightning scars ever matter?)
Why did it take so long for Gon to find Tae-eul at the end but now they can easily go on weekend universe vacays and find their way back, no problem?
Will Gon ever have an heir if they just stay in their respective worlds? (super important question, I know)
Luna had at one point said she’d gotten her name from a cat, but then she says it’s her name still when everything is set right. So…did they writer just throw away her real backstory at some point?
Why were there so many characters that really didn’t have a point? I’m sorry Sinjae, but you were just…there. And after so much mysterious buildup, Luna wasn’t much to speak of either. And the Prime Minister’s ex? Who knows.
In what universe can a show just wish away a plot hole by having a character say “let’s just skip that?”
How did this show expect us to cheer for the “OTP” when their relationship was based on nothing, they had minuscule time to get to know each other, and then suddenly they are proclaiming their love upon each and every tear filled reunion?
What was the point of time stopping? It never felt like an urgent issue and again was just….there.
How did changing the past prevent Luna from getting cancer?
What was the point of the grandmother being from Korea?
And finally, why were these two world arbitrarily connected when apparently there are now infinite worlds that they can wind up in?

If you’ve made it this far, thank you for listening to my rant, have a shot of Lee Min Ho at least and…may I suggest checking out Where Your Eyes Linger instead? 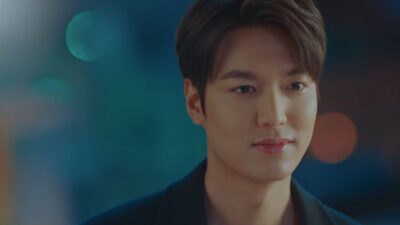 I wondered about the heir thing too. How long would he be able to do that or was he just going to let his uncle’s granddaughter be the next in line?

I assumed Tae Eul could remember everything because she was outside time itself. If so why did the uncle disappear while still in magic land?

Time was stopping because the time stick was broken. It wasn’t supposed to do that, that was reason he wanted to get the other half quickly. It would eventually stop both worlds forever. That was the point.

Seeing as how Luna was still an orphan could she have gotten her name from a different cat? I wondered about the cancer thing too. Maybe because Minister Koo’s mom took her in she was cared for and that prevented the cancer?

I think Lady Noh being from Korea was just to show that the time stick was used by previous generations.

I think the two worlds being connected had something to do with the stick being broken. I think Gon said as much.

Sin Jae turned out to be just a means to an end which was a little disappointing.

I wanted to know what Rim was doing in that abandoned building too. Like did he just pour stuff from one cauldron to another?

Lastly, I don’t question how and why people love. Two reasons, one 8s 0ersonal and the other I saw on Oprah. On Oprah there was a woman that said she met her husband in Vegas and married after having knowing him for only 45 minutes. They were currently on the 30 something year of marriage. My parents met at a NYE party and were married that June. Friday will be their 55th anniversary. Sometimes things just click or from the first moment you just know. Some people build a foundation for commitment and for some people the commitment is the foundation.

@thatstp 55 years is a long time! Happy Anniversary to them both 🙂

Happy anniversary to your parents – that’s wonderful! Certainly love works in different ways for everyone. I really like your last sentence on commitment – sometimes things happen gradually over time and sometimes it happens in an instant. My qualm with the portrayal in the King was more to do with how I didn’t feel the chemistry between the actors and it simply came across as following a script for me. However, that’s just my opinion and others may have thought they worked great together!