The Box Man found the mole tunnel a few days later, but the entrance was so narrow that he could not go in.
“What do I do? I need to take this box off my head to get into the tunnel.”
That moment the Masked Boy’s voice reached him from inside the tunnel. “Mister, don’t worry about us. Just run far away. That Shadow Witch will return soon!”
However, the Box Man mustered up the courage to take the box off his head. Then he went inside the tunnel and saved the Masked Boy and the Empty Can Princess.

Upon getting out of the dark tunnel, they saw the man’s face covered with dirt and grime instead of the box and burst out laughing. They laughed and giggled. While laughing uncontrollably, the Masked Boy’s mask fell off, and the can surrounding the Empty Can Princess’ torso fell off with a loud clunk. 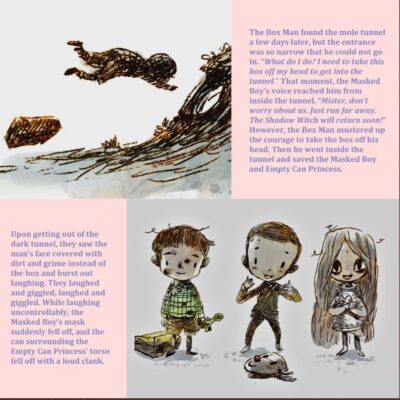