The three resumed their journey. Soon, they ran into a clown who was dancing naked in a field of thorny flowers.
The Empty Can Princess asked, “Why are you dancing with all your might, knowing you’ll be pricked by the thorns?”
I feel this is the only way to make people look at me,” he answered. Then the Empty Can Princess walked into the field of thorny flowers and started dancing with the clown. “I am an empty can so, I won’t be hurt even if I get pricked by the thorns.”
When she began hopping and dancing, loud clanking noises echoed from her empty torso. And upon hearing those sounds, people began to flock to where they were. The crowd watched their dance and applauded them.

They began a new journey to find their new faces, but the evil Shadow Witch appeared in front of them again. She kidnapped the Masked Boy who shed tears on behalf of the mother fox as well as the Empty Can Princess who danced with the clown.
“Two of you will never be able to find your happy faces!” After placing such a curse on them, she locked them in a deep, dark mole tunnel. 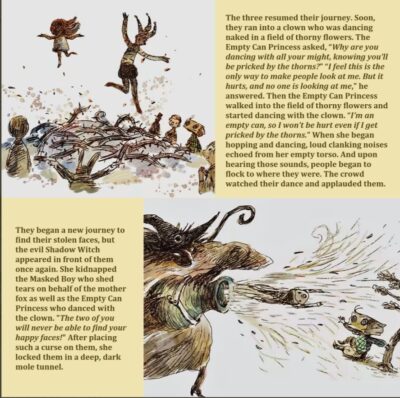 OMG. I just realised these other characters are the other patients….