@chungkingpineapples I love how Choi Ban-seok thought for a split second that he could just crouch in the middle of the front row.

LOL. This made my day!! He’s like “Let me be pose right next to the President…wait…on second thought…bad idea…I’ll hide in the back….run!” Ha!
Thanks so much for sharing this, so glad someone made a gif out of this moment!

On the Verge of Insanity ep5: I was starting to worry that Choi Ban-seok was a male Candy whose main purpose was to teach cold-hearted HR team leader Dang Ja-young a thing or two. But I should have had more faith in the writer who gave us so many interesting female characters in Witch’s Court. In some ways, Ja-young’s predicament is more realistic and complex than Ban-seok’s. Her job is to reduce the Changin permanent staff by 50%. She comes up with a perfectly reasonable proposal for that purpose. (In fact, I love how she made use of existing circumstances such as the promotion test and Han Se-gwon’s contempt for his fellow developers.) Hanmyeong’s president is all for it. Yet all she gets for her pains are a gang of furious men staring her down and the old paper slap. To be fair, the R&D department has every right to be angry. But why should she be humiliated before so many people just for doing her job? Men like Han Se-gwon and the lecherous ex-team leader have got away with so much more.

Moon So-ri really comes into her own in this episode, and so does the direction, sound and editing. In the final scene, you can feel the defiance, the suppressed panic and the way she is just barely holding herself together. You can even see how she has built up her defences over the years, precisely to deal with situations like these. I was going to focus on all the uplifting stuff in this episode – the joy of work when things go right, the pleasures of cooperation, the euphoria of coming up with good ideas and doing a good job. But it’s the downbeat ending that has stayed with me, and made me look at the rest of the episode in a different light.

On the Verge of Insanity: no romance but lots of chemistry.

On the Verge of Insanity ep5: Choi Ban-seok’s milkshake brings all the engineers to the yard. 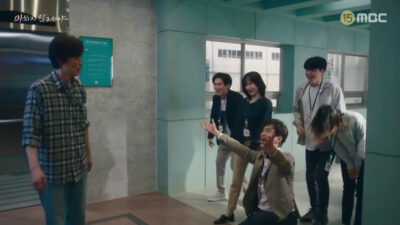 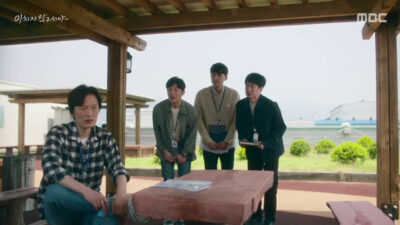 “Choi Ban-seok’s milkshake brings all the engineers to the yard.”

This is THE perfect caption. LOL! (Ban-seok makes being an engineer look badass!)

It’s On the Verge of Insanity’s turn to get the Friends treatment.

Will get to start this drama soon-ish.

The sexual harassment incident was just one of several issues touched upon by ep3 of On the Verge of Insanity, but I thought the show did a very good job of showing the following:

1. It can happen to anyone, even a strong, fierce woman who “could have been a union leader”.

2. Well-meaning people who are ostensibly on your side might still fail to support you. Dang Ja-young, though sympathetic “as a woman”, is not sympathetic enough to question Team Leader Kang’s indispensability. More disturbingly, it had been at her own team leader’s behest that Seong-eun didn’t report Kang earlier. I really like the scene with Seong-eun, Ban-seok and Team Leader Noh, in which Ban-seok realises that Noh has known about Kang harassing Seong-eun all this time but advised her to keep quiet about it. Seong-eun is too upset to notice that Noh is more anxious about his cordless vacuum cleaner than about her, but Ban-seok knows, and seems torn between concern and shame for his hyung.

3. The harassment can take obvious forms (though even then the perpetrator might still claim that he was just trying to be friendly or something). But even in less obvious forms, like Kang’s ogling and dodgy comments, it is just wrong, and should be taken seriously.

On the Verge of Insanity ep3: Jung Jae-young is NOT happy with HR’s way of dealing with sexual harassment. 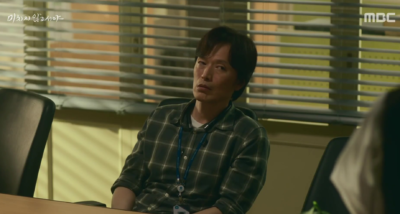 Jung Jae-young and Moon So-ri being rather adorable while promoting MBC’s On the Verge of Insanity. 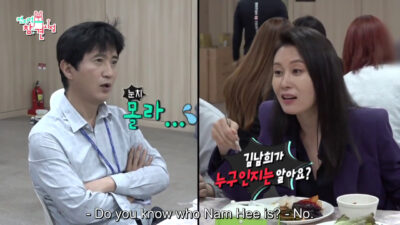 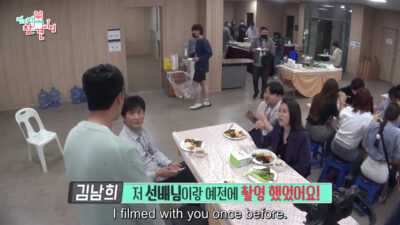 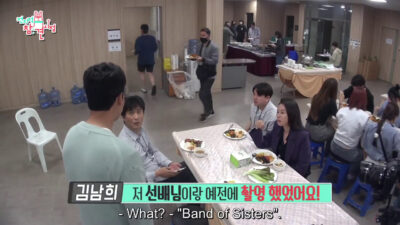 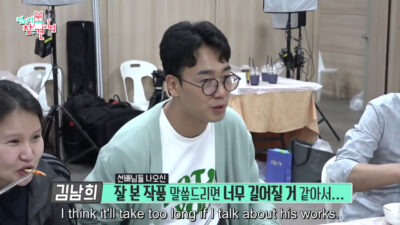 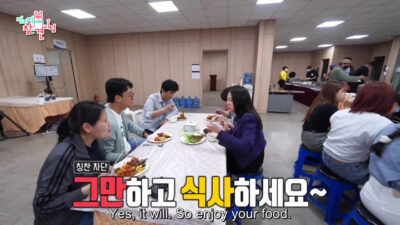 Daebak Realty aka Sell Your Haunted House: I know the case-of-the-week format is not universally loved and in some cases might hold up the central story arc, but I must say I really like all Daebak’s cases so far. Not only are they really well written, they also diffuse the angst, and show Ji-ah at her fiercest and best – i.e. working hard instead of just moping. Ep9’s case, in particular, makes many interesting points about how women are viewed by men as well as by other women.

Gosh, she is such a stitch. I believe I promised to do something like eat a hat, or jump out of my skin with joy, if she won. So … I’ll be off doing that for a while 🎉🎉🎉

This was awesome! She’s hilarious!

I\’ve forgiven Oh Master many things, but I can\’t forgive the writer for putting Joo-in through the romantic wringer not once but TWICE in two consecutive episodes, as if he thinks her sole function is to Stand By Her Man even when her man is emotionally abusing her. She is a brilliant top star who loves her profession, ffs. If he really loves her, Bi-soo should stop ping-ponging between nastiness and stupid “dates”, and just finish the damn scripts. The only good thing about ep10 is that Yoo-jin actually tries to make things better instead of taking advantage of the situation.

This. I didn’t like at all her characterization during ep. 10. She accepts to be his punchball and he treats her just like that. Then hugs, apologizes and buys a gift. And all this during the very first days of their relationship…

I have trouble with these finger-heart things as well.

How cute is she! Shes so confised!

Oh Master isn’t a masterpiece and IMO there isn’t much romantic chemistry between the two leads. But there seems to be a rather heartwarming theme of connections and reconnections running through the show. Though I can’t quite believe in the romance between Joo-in and Bi-soo, I’m completely convinced by how they’ve grown to like and respect each other as people. And I love all the interactions between them and their mums; the mums and Chang-gyu; Hae-jin and her doctor friend; the two assistants; the two agency heads; Bi-soo and Yoo-jin (who is already calling Bi-soo ‘hyung’); etc. Somehow each character becomes a better person in the light of their relationships with the others. (I think that might eventually be true of Bi-soo’s dad too.)

Which is why I’m not so worried about the makjang elements in the plot. Alzheimers and cancer are almost de rigueur in Korean melodrama, but the characters in this show have become so mutually supportive that I don’t think there will be any gratuitous suffering. Also, I’m surprised and rather moved by how the show has linked terminal illness with play-acting and story-telling – i.e. the respective professions of the two leads. Joo-in resolves to maintain her connection with her mother by playing whatever role the confused Jung-hwa might give her. Bi-soo is spinning a narrative about Hae-jin being a woman of leisure who should be spending more time with her son. Close to death, Hae-jin is nevertheless re-writing her life and playing new roles. Oh Master might be stuffed to the gills with tropes, and old-school ones at that, but what it has done with those tropes so far is more interesting and ambitious than I’d expected.

“ But there seems to be a rather heartwarming theme of connections and reconnections running through the show. ”

Just found out from this article that the directors of Beyond Evil and Vincenzo are women: http://www.hani.co.kr/arti/culture/culture_general/990742.html (In Korean; Google Translate conveys the bare facts.)

I can’t comment on Vincenzo, but Beyond Evil does have a different feel from other shows of its ilk. Though of course it isn’t always necessarily for the better, it’s still pretty fascinating. For a start I wonder if the two leads’ weirdly sadomasochistic chemistry would have been quite the same under a male PD.

Can’t identify the pop group but: OMG that’s Dr Park from Romantic Doctor 2! Woo Tae-ha from Stranger! And the eldest brother from My Ahjusshi!

The pop group is Oh My Girl. I’m not big on girl group songs generally but I actually really liked this one!

Just finished ep12 of Beyond Evil. Ironic that poor Dong-shik was arrested for his twin’s murder, cos he seems to be the only person who was NOT on Korea’s Busiest Country Road that night. I was going to say “besides Joo-won”, but for all we know the kid was also lurking somewhere in the background…

On a different note…

Thanks @knewbie and lol. That must be the ‘alternate’ universe where the BEYOND EVIL characters reside. YJG cutting loose. I love it.
I am current through episode 8 so that is definitely an alternate place.

I expected high-quality bromance when the stars of Beyond Evil were announced, but I never thought it would turn out to be red-hot tortured romance, twisted by mutual suspicion and past trauma. Ok, ok, I’m kidding, but the homoeroticism goes through the roof in episode 10, with Joo-won giving Dong-shik a taste (ahem) of his own medicine: teasing him with planted evidence; luring him to his fancy boudoir; even offering him wine and a sizzling, juicy piece of meat. As usual, there’s a lot of mutual space-invading. And it culminates in what we’ve all been waiting for: one of them collapses in the other’s arms!

Seriously, though, I really wonder how much more DS can take. The speech in the interrogation room with Chief Nam wasn’t particularly original, but Shin Ha-kyun’s delivery, his incredulous laughter through the tears, made it intensely moving. Over the past 10 episodes we’ve seen Chief Nam defending him, openly or in less obvious ways, as if to make up for what he and his family have suffered at the hands of the police. But it is this episode in particular that demonstrates DS’s emotional reliance on Chief Nam. I wonder: has JW’s use of Chief Nam as bait led to the latter’s death? In effect, has he repeated DS’s mistake with Min-jung and her fingertips?

At yet another RaFiDoC (Raw Fish Dinner of Corruption), Councilwoman Do asks Lee Chang-jin for hard drugs. Not for herself, of course, but for her dear deer-sketching son. Frankly I don’t see why Jung-je shouldn’t sketch a deer or two at the office. It’s not as if he’s watching Netflix or drinking on the job. But he IS being set up as the next suspect, possibly having run over Yoo-yeon with his car or at least witnessing it (hence all his talk of killing deer), with the crime concealed by Kang Jin-mook on Councilwoman Do’s orders. Now all I have to do is sit back and watch the next episode demolish my theory.