The fact that people don’t understand that Nevertheless is about a toxic relationship ON PURPOSE drives me insane.

THAT’S THE WHOLE POINT OF THE SHOW.

They’re not saying, “This is a good thing and something to aspire to”, they’re saying that this is how a girl can become attracted to this sort of guy so easily despite all the blaring warning signs, and the show makes that abundantly clear through Na-bi’s conversations with others and her internal monologue. Unless the narrative completely reverses direction, I highly doubt she’s going to end the story with him.

People really don’t understand that having a bad thing in a show doesn’t mean it endorses the bad thing. Yes, it’s portraying things as romantic for Na-bi because that’s how she sees it, but it also shows her hesitancy and uncertainty about it all. The show does an excellent job at getting us completely into Na-bi’s headspace.

This is why we can’t have nice things. Drama writers dumb down their scripts for THIS EXACT REASON. People have NO media literacy. Maybe I’ll eat my words if the show makes a 180 but I doubt it.

We as the audience know that her heart is going to be broken by the end. Heck, SHE knows it as well, she just is too enamored and willing to give him the benefit of the doubt.

If the show isn’t your thing that’s fine but if you’re like “NEVERTHELESS IS BAD AND TOXIC AND ROMANTICIZES A BAD MALE LEAD!!!!!!” um yes genius that’s the whole point of the show. People are like “Think about the children!” and it’s like… uh, well, some of these episodes are rated 19+ so this show is not meant for your 12 year old daughter, sorry Susan.

How dare the show trust its audience to be mature enough to understand the very obvious themes of the show.

Anyway, my hot take of today is that Nevertheless (so far) is good, actually.

Also, it’s definitely going to give me at least one lesbian. 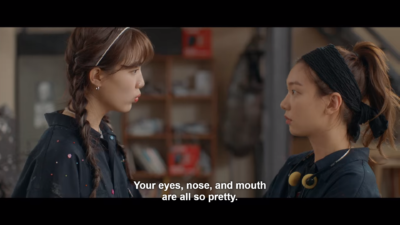 It definitely appeals to me as well. If you’ve ever been in any relationship, you wonder the same things she does. You wonder of the guy (or girl) is just playing you, and if you don’t, you’re super naive. And if you’ve never fallen for a sweet talking, sweet smiling, knows exactly what they are doing to you person, then you’re stronger than I was, or too hesitant to be in such a place. I still don’t know which is better.

I have radar that makes me immediately run from those kind of people, whether they have ill intent or not.

Preach for the people at the back!! It’s been driving me INSANE how some people are clearly misunderstanding the entire point of the show – then screaming out their bad takes on the internet. Bad things happening onscreen ≠ endorsing/romanticizing said bad things. It’s maddening how many people don’t get that. It’s not about disliking the show itself (which is completely fine), but getting unnecessarily outraged over an issue that doesn’t exist.

And yes, we’re absolutely getting lesbian(s) (maybe even bisexual rep?) out of this. I will be so sad if Sol and Ji-wan aren’t a thing by the end. Between Mine and Nevertheless, sapphic kdrama fans are eating well this year.

I finally finished Mine the other day and made real maniacal laughter with the way the drama ended after the actress who played Suzy’s husband said “they go back to “normal” in the end”.

The sheer GLEE I felt with that phone call.

I declare 2021 in kdrama Year of the Lesbians

I legit screamed in happiness when that phone call happened at the end of Mine. Yes, they went “back to normal”… normal lesbians who are happily in love again.

I am SO HAPPY that Suzy’s actress’s husband ended up being a complete clown. Lesbians for the win.

I was thinking of catching up with the latest episodes and posting a very similar comment. The characters in Nevertheless break the drama mold. They are not inherently good people who you know will inevitably turn good by the end of the show even if they were not in the beginning. They are not the atypical ML and FL but they are more human than most ML and FL in dramas. I’m also worried about the response-the ratings and criticism, that it will prevent writers and productions from making anything that isn’t atypical. But thankfully it is on JTBC and ratings have never stopped that channel from valuing a show and also Netflix so maybe the international buzz will be a good sign for producers (as of now I guess it is being criticized internationally too). This show is meant to be disturbing. Moreover, I don’t think it is just promoting a toxic relationship, rather it is showing how a very normal girl can get stuck in one and I don’t get what’s wrong in that. I think part of people not liking it goes to the fact that it may just be too real,. Escapism is one reason kdrama viewers choose to watch dramas but these characters are similar to people who have done disturbing things in real life to the people around you.