“Vagabond” (2019) [9/9]
Starring: Lee Seung Gi and Bae Suzy
Vagabond is a whole new level of KDrama. 100% an action drama, every episode is packed with excitement, stakes, and thrills. Every single episode feels epic and packed. Explosions, chases, gun battles, hand-to-hand combat, and more! Each episode ends with a cliffhanger, leaving you desperate to watch the next episode. Amazing international locations and sets. Stunts and performances were top notch. Seung Gi and Suzy (still) have great chemistry. Hae-ri was an extremely likable, relatable, and believable female lead (though underutilized at some points in my opinion). Dal-Geon is both tough, cool, and fearsome, while being awkward, tender-hearted, and compassionate. Love everything about this pair. The political intrigue keeps audiences on their toes, as does Korean secret service focus (NIS). Heroes had plot armor at times, but the entire show is extremely well crafted. One emergency medical operation scene they had was unnecessarily gruesome and graphic in my opinion (and probably upped the maturity rating without really impacting the story as a whole). Violence and death escalates through the series.
I have mixed feelings about the ending. I can’t give this a 10 for enjoyment because of the ending. It’s just not satisfying, it’s not the payoff we’re looking for. The transformation of the two main characters… is unsettling when left unresolved. That being said, if they’re leaving it there to gear up for another season (unheard of with KDramas), I’m 100% on board. It’s a great twist and set up for more story. If that’s the end of the show… It’s frustrating.
Watched: July 2021
5/5 Stars 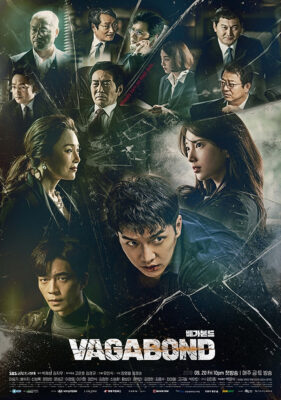 Suzy will have to pull off a really great role for me to get over my first impressions. I’d like to see her in the drama where she is a pansori singer, The Sound of a Flower.

I’ve always liked her (she was the lead in the first KDrama I ever watched), but I think I really felt her come into her own as an actress in “Start-Up!” and “Vagabond”.

I think the world is divided into those who adore her and those who are meh.

I liked her in While You Were Sleeping and Start Up. The rest were meh, or worse.

I’ve been trying to find a place where I can watch Dorihwaga/The Sound of a Flower.

Let me know when you do.

I’ve been unlucky at this point. 🙁

I’ll check out that other site and get back to you later.

That’s basically my thoughts on Vagabond too, hard to rate because it’s really good fun but then it feels like there’s meant to be more.