Can anyone do a recap for Search for me? Because I can’t watch anything with a mutant in it… Yeah, call me weak.

It’s not as scary, more like tension like.
The CGI is not that good, so you know it’s all fake.
But it’s fun to watch, and it’s only ten episodes (on the other hand the plot is not that strong as to go further).
If you want to have fun and not give much thought to what your’re watching, it’s your drama.

I thought so too but the narrative’s good! Not that scary or gruesome actually, its much of a suspense 🤔

Alright. I took a long hiatus from this site.

I think there is the beanie royale you can vote for some couples.

Is the celebration over (I haven’t been here for months) or have I never noticed it all this time? Because the long banners (I forgot the official term for them T_T) are back in action!!! 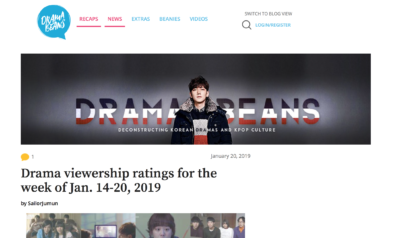 ^ All the dramas and variety shows that I am catching right now are so interesting and compelling that having nothing to watch on Fridays and Saturdays feels so empty and bare.

Am I the only one who experiences such emptiness? Any dramas to recommend so that I can fill up the other two days of the week?

I pace myself and usually only watch one thing a day. thus by having three airing shows I cover 6 days of the week, I often try to have a non airing drama or two on the go as well, to fill up those gaps.
I’d recommend Where Stars Land/Fox Bride Star but it’s also a Mon/Tues drama… lol

I can never seem to do that!!! I always want to find out the next episode as soon as possible so I catch them through livestream T_T

It’s definitely different for everyone so I understand~! Haha I have definitely had to practice my self control with this method hahaha.
Ah yeah fair enough. Hope you find something to fill the gap then!

I don’t know why but I have a pretty strong gut feeling that Seo Hyun-Jin and Lee Min-Ki are going to date in real life after The Beauty Inside. Sparks between them are flying off the charts!

Is there no one watching Mr Sunshine??? Because I need someone to help me analyse why the hell Gu Dong-Mae sliced off Ae-Shin’s hair!!!

There was a discussion about this. I can’t remember if it was in yesterday’s open thread, or if it was on the fan wall.

I am officially on Team TA (Wooyoung) after episode 10 of Gangnam Beauty.

Previously I couldn\’t make up my mind thanks to Cha Eunwoo\’s robotic acting as Kyungseok and TA\’s inactiveness in pursuing Mirae. But then in this episode, TA reassured Mirae that it\’s alright that she underwent cosmetic surgery before: \”So what? People fix their faces to become pretty. Now you are pretty and that\’s great, isn\’t it?\” I melted into a puddle immediately and am sold. 😍😍

I know this drama is probably trying to promote \”loving the inner beauty of people\” and obviously, TA isn\’t gonna get the girl. But all I am saying is Mirae really needed such validation – to feel confident about her beauty and that it is not wrong to pursue beauty and happiness through cosmetic surgery. Afterall, life in plastic is fantastic! 😝

-cont- I hope I am not carrying hopes too high for it though. I don\’t want to be disappointed T_T

PS. Also, is it because I\’m at Jang Geu-rae level hence the 200-character limit? 200 characters aren-

Sorry, I didn’t mean it like that. A lot of people have this question and I just couldn’t resist.

But don’t paste by right click, it won’t work.

Did you get it to work?

Did you try to edit your post after copy pasting? If you edit it at all, it will automatically reduce it back to 200 characters.

@shihui If you edit a post with media and formatting, you’ll also lose those as well–in case you didn’t know.

I’m sorry, I’m not very nice, and got distracted before I could post just kidding.

Thanks for the tip though, I can finally type out my thoughts in full :’)

I’m glad you got it to work 🙂
Sorry about the teasing.

I hope we won’t. This is one of those rare drama where the characters think, act and make decision like human bejngs, not the caricature versions of themselves despite their absurd situations.

It has been scientifically proven that you can never expect too much of My Ahjussi. Whatever expectations you might hold, they will be defeated and surpassed. And each episode will exceed the previous one.

I shall trust science and you 😉

I am all ready to jump into My Ajusshi right after my exams end. I have been catching up on short clips of the drama and I feel that this is one drama that I will love, even its flaws.

It’s awesome so far and drfinitely will land a spot on my favorites list. Enjoy!

Ita, so far I haven’t seen any flaw.

Flaws? What flaws? There really aren’t any – other than the fact that it will end next week. *frowning*

*puts on my glasses* Where are the flaws? What are you talking about?

Thought I was a MinHoYoung Shipper, all ready to brace for the heartbreak if it doesn\’t sail.
But who\’d have expected for Dr Ye to be so adorable in a relationship?!
I\’ve jumped ship everyone :/
#APAD

welcome to the Ye Line ship chinguya.. and m so so happy that adorable Dr. Ye pulled you in..
do you need anything specific to calm your heart down after today’s episode.. ? cotton candy or drinks ???

Yes I do need something calm my heart down >.<
But I think what I really need now is Episode 13!! More cuteness!!!

only if i could get epi 13 right away… i am also just suffering to wait for one whole week see these cuties back on my screen.
to calm your heart how abt something cool … kind of starbucks drink ?

Wow….really???? Congrats….We welcome you with hugs as you aboard our ship…..