#2020RoundUp.
Freestyle – One K-drama that ruled every prompt.
Okay, only 8 out of 20, but that is nearly half our RoundUp about one and the same K-drama!😲

Day 10 – Drama @wishfultoki convinced you to watch and you can’t be grateful enough: Mori who stole the Beanies’ hearts

School 2017 anyone? Not me, I was merely lurking on Dramabeans back then and wondering what Mori meant.🤔 This summer I finally gave in to my curiosity and started this sageuk to find the answer.

Day 17 – One that made you emotional: Mori who stole the Beanies’ hearts
The timing was very unfortunate with the sudden health decline of my warrior friend. I would always avoid sageuks because I am not good with death and other tragedies. Still, I found myself pressing play episode after episode to distract myself from the near death experience and tragedy that were happening in real life at that time. My watching experience as a result, was a weird one to say the least. One moment I was numb enough to stomach all the on screen horror, the next second I was bawling because a baby started wailing in the middle of a blood bath.😭

Day 6 – Drama you know you will rewatch: Mori who stole the Beanies’ hearts
Take this with a grain of salt, because I usually do not rewatch shows. This sageuk however, deserves to be watched and appreciated with the right mindset and for that reason alone I would consider it. Then again, I already cherish this show because it was there when I lacked the right mindset, and I view it even more favorably now that my friend is healing well.😃

Day 11 – Your 2020 crush: Mori … obviously … and Gil Hyun Orabeoni (read below)!❤️
Mori wears eyeliner and a permanent snarl. Do not call him orabeoni, it gives him family feels and a lone wolf like him is too cool for that.😎

Day 15 – Secondary characters you will never forget: Mori … and Gil Hyun Orabeoni!❤️
I came for Mori, I stayed for Hong Gil Hyun. The story is actually about his dongsaeng Hong Gil Dong, but we meet both brothers during their childhood when it all began. Gil Hyun takes his duty as the eldest child seriously and is very protective of his younger brother and sister. Like a true Hong clan member he is also kindhearted, passionate and good with weapons and punches. Why him you ask? Well, he is intelligent, he loves reading, and the time skip was very generous to him.😉

Day 19 – Most memorable scene: How to expose yourself with a bang, Hong Gil Hyun style!🔥
Poor Gil Hyun takes on the identity of a scholar in order to survive after he gets isolated from the Hong clan. This new identity gets him into the villainous king’s inner circle eventually, but he feels conflicted because he cannot forget his true identity or how much his clan has suffered. His new identity turns into a formidable weapon as soon as he finds out the truth about his clan and the king. As a double agent he then helps many people sneak in and escape from the palace, and he saves the best escape for last. Rather than sneaking off with everyone else, Gil Hyun actually goes to greet his enemies for the last time and leaves them a parting gift that will make them quickly realize who he really is. Of course he has rejoined his clan already by then.😆And that Beanies, is why I call him and him alone, orabeoni.😍

Day 7 – That OST you are obsessed with: Mori who stole the Beanies’ hearts
🎵Eheeeeyaaa Ohoooyaaaa🎵 Spring in Ikhwari gives me fond memories of papa Amogae and his Hong clan, and Honey Lee mesmerized me with her singing and dancing throughout the drama. My favorite is SaeNal / New Day in both versions. The powerful vocals always spurred our characters into action and I might start playing the song whenever I need extra courage.💪 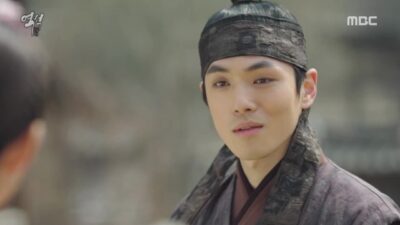 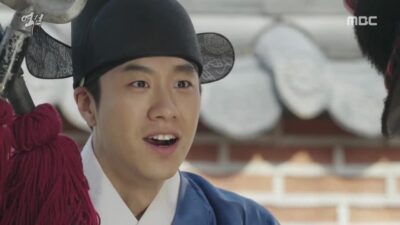 I love everything about this post, this ode of love to a drama that certainly had its tragedies but also had hope❤️❤️❤️❤️❤️❤️Mori Card❤️❤️❤️Gil Hyun Orabeoni Card❤️❤️❤️🎵Eheeeeyaaa Ohoooyaaaa🎵

The ladies in the drama were also fantastic. I really hope to see Chae Soo Bin and Honey Lee in another sageuk. Did you notice the singer Ahn Ye-eun appeared in one of the most inspiring scenes? It made me cry just to rewatch it: https://youtu.be/-iLNmb-0xTg

I know you’re not a sageuk person, but if you ever feel like watching another one I have a whole list of recommendable sageuks! Hearteu Duuuuuuuu! 💖

As you can see I am very proud of my fan club membership cards!😊 Chae Soo Bin and Honey Lee were indeed great as well, but my crushes took up all the brain space!🤭 That was the singer??!!😲 Thank you for the offer! I have enjoyed a couple of fusion/fantasy sageuks, but did not dare to mention them because I do not know whether you are a sageuk purist or not (nothing wrong with that!)😉

Embrace your sageuk side! 😄

I really liked THE KING IN LOVE, with Im Shi-wan, Hong Jong-hyun and Yoo-na. It’s set in Goryeo, which is a nice change from Joseon. The music and costumes have a dreamy feel.

For a more action-packed drama with similar themes as REBEL, I recommend CHUNO. It’s 10 years old now, and stars Jang Hyuk with a thinly-clad Kim Ji-seok as part of his rag-tag team. There are abs. It was referenced in CRASH LANDING ON YOU this year: one of the North Korea ducklings was watching it and he was desperate to know the ending (warning: it involves tears).

” thinly-clad Kim Ji-seok as part of his rag-tag team. There are abs.” I would get offended at your luring tactics, but then again, MORI worked exceptionally well!😄North Korea duckling? Are you talking about our beloved Department Head Baek from Special Labor Inspector Jo?😊❤️

You see right through my luring tactics 😂

Our beloved Department Head Baek moved to North Korea and became an adorable obsessed kdrama fan. He taught his captain about South Korea based on what he saw in dramas.

Now you made me want to rewatch Rebel! Loved every character in this, Mori and Gil Hyun oraeboni, of course, and spunky Garyung and Gonghwa (special shout-out to Honey Lee’s beautiful music playing and dancing). But my crushes were villainous king – Kim Jiseok, 2020’s best buddy-turned-into-boyfriend in MUF – and Hong Gildong. That role was tailor made for Yoon Kyunsang, it played into all his strengths. Hope he gets a good new role soon!

Every character you mentioned was a treat to watch, buuuuut crushes always take all the spotlight as you know.😉 I discovered Kim Ji-Seok this year in Top Star Yoo Baek, Sassy GoGo (Garyung was there too!) and Rebel. The man can act and is not bad on the eyes either.😍 I would like to hug Yoon Kyun-Sang, but I need to find a ladder first.😆

Now you make mw want to watch this! It goes directly to my saeguk watching list… I keep repeating I’m not a saeguk person, but… damn… you all make me watch these dramas!!

I am not a sageuk person either and look what happened! I am willing to be your moral support if you ever decide to press play!😉

I usually avoid sageuks too, or at least ration them so I don’t have too much pain each year. This year I’ve overdone the melos and dislike the pain from them at least as much, so maybe a sageuk is in my future for next year.