I’d been embracing the hype of Asian Games on the last two weeks. I attended the Opening Ceremony and boy, it was a once in a lifetime experience. Too bad I lost in the ticket war for the closing, I really wanted to see my long time oppas (re: Suju) .
I couldn’t not do anything when they were here in Jakarta. But on the other hand, I found myself not as eager as the younger me, when I ran around the city to find Yesung (thank god I met him), or camp in a fan signing event from the night before (it was a big failure). So, I made a background plan, where it would be amazing if I bumped into one of them, but it would be okay too if I didn’t.
I work from 8 to 12 am on Saturday and usually I meet my friends and hang out until dawn (the perks of being single). Last Saturday, I wouldn’t meet my friends until 7 pm so I had free time from 1 to 7 pm. Here came the plan. The closing ceremony was on Sunday so they might be free on Saturday afternoon. Some fan spotted Leeteuk and Ryeowook on a shopping mall integrated to Ritz Carlton the day before. I prefer somewhere indoor so I chose a bigger shopping mall at the heart of the City. Whatever the destination, they must’ve stop for a coffee. I know for a fact that SJ boys prefer S*bucks especially when they are abroad. So I planned to buy a novel and sit on the cafe until 7.
Guess what, when I came with my novel to S*bucks, Ryeowook was already there. No other member around, it was just him and a manager. I updated my SNS (milenial, duh) and hesitated for a moment would I bother them if I came for a selfie (his face and hair style was camera ready). In the end I walked to their table, I only said “저기…” when the manager said no with his hand, Ryeowook just smiled but didn’t say anything. So I was just “아..네..” and back to my seat.
The problem was my seat had the best few possible (other chairs was taken), but there was no table (taken by a customer beside me) so my position wasn’t natural. They already knew that I recognized them so I didn’t want to make RW felt uncomfortable with my staring. So I moved to another chair, and all I saw was their manager’s back hahaha The manager left for bathroom for like 5 minutes and I could see RW clearly but I again, I didn’t want him to feel uncomfortable so I tried not make it obvious (pretended to read my novel). I only tried to take a picture twice and they were all blur haha I put my phone back down too quickly.
After for about 15 minutes, they left. I was contemplating whether or not to follow them but then decided I didn’t want him to get freak out of a freaky stalker fan so I stayed.
I sat there with my head full with what ifs. What if I resisted and tried to at least say “악수라도..” and earned at least a handshake. Or said “제대 축하해요..” or impersonated his “자신 있어어어!!!” just to be funny. If it was Siwon or Leeteuk they would go for a selfie. If it was Kyu… I would be to nervous to do or say anything and I know he wouldn’t say yes for a picture hahaha 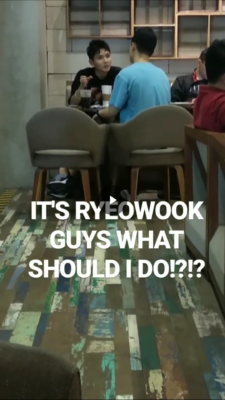 How exciting! I think you did the admirable thing by leaving him alone. They probably get really tired of stalker types.

Thank you~! You make me feel better for not insisted more.

While reading your story it felt like I was watching a drama or sth….it was engaging….

The timing was dramatic right haha

As a fellow K-pop fan, I’m excited for you! As a European fan, I am crying in a corner.

I admire your bravery though! I think I wouldn’t be able to come up to any of my oppas. I would freak out.

Maybe I could calm because RW isn’t my bias.. If it was Kyu… I don’t know, there is possibility I’d involuntarily doing a slapstick by just walking near his table hahaha And no, I wouldn’t come up to him because I know what he’d do and I’d be disappointed. RW was in grey area, I couldn’t predict his reaction, and because he was just discharged from military, I thought maybe he’d happily embrace his popularity. Leeteuk and Siwon is a yes, they’re approachable, Yesung is moody but it’d worth a try, Heechul is no don’t, Eunhyuk is a yes, Donghae is yes if he’s with Eunhyuk, no if he’s alone. Sorry I’m blabbing hahaha

Haha, it’s okay. I find cool how you are able to kinda predict their reaction. I guess in such situations it really pays off to know them well… Congrats anyways! You got to see Ryeowook! 🙂

why is Heechul a no?

Because I think I’ve never seen a picture of Heechul with a fan, in his personal clothes. I’ve found some fan account about their encounter with Heechul, but it usually during, on the way to or back from work, and those are from a few years back. I think compared to other members, Heechul has the most scary stories about sasaeng, and he sometimes expressed his frustration. So, I concluded that for Heechul, it’s better to give him some privacy, he’s more likely say no anyway.

🎉Congrats!🎊 on: 1.going to the Asian Games 2.seeing RW and being brave both to approach AND restrain yourself.

your description below of SuJu member’s reaction for a request for a photo is so on point. I imagined them doing/saying what,how you described them.