My Name Is Kim Sam-soon 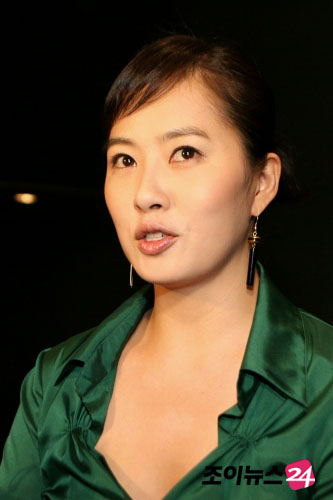 Sexy actress Kim Sun Ah, who’d had a fairly lengthy resume but vaulted to superfame in My Name Is Kim Sam Soon, is back after a rather quiet past two years.

Her first post-Sam Soon project was supposed to be the legal drama movie Thursday’s Child (she was cast as a tough lawyer in the film), but that project ran into problems midway through filming and fizzled. She’s also done CFs in the intervening time, but this’ll be her first acting project in a while.

Now she’s cast in another film, Girl Scout, and her fans are thrilled to have her back, pronouncing that “Samsoon has returned.” They’ve been going to the filming location showering Kim Sun Ah (and staff) with gifts of snacks and such. (Honestly, I don’t know how the Korean entertainment system allows fans such access and proximity — sooner or later, the crazies’ll come out, and I’m not even talking about the rabid anti’s).

Girl Scout is described as a comic crime drama, and Kim Sun Ah takes on the role of someone who’s accident-prone regarding financial matters.

Personally, I’d rather see her back in another drama series, but it’s nice she’s back in whatever form. Two years of unintended absence (wrought with legal and contractual disputes, I believe) taken at the height of her popularity just seems wrong.

Oh yay~ It's nice to see her back

Oh..what a concidence, I was just watching the re-run of "My Name is Kim Sam Soon" and here you're doing an article on her. Glad to know that she is back and looking forward to seeing her drama.

I loved her in Kim Sam Soon - can't wait to see her next project.

i can't wait to see her movie and hopefully, a new drama soon :)

Yeah she's a very talented actress. I loved her in My Lovely Sam-soon with Hyun Bin. Hope to see and hear more of her soon. =)

I know that this is off topic but since I read your site almost every day I enjoy most of the song that you post... is there any site that you recommend where I can at least see the lyrics of Korean songs? romanized or translated or even Korean(I can read but at least I can translate ^ ^ via internet )so i can know what they talk about in the songs?
Thanks for ur help...
~~*Love ur site*~~

You know it was MNIKSS that made me wanna watch Korean dramas ... Yeah, I did not realise she had been away for so long! Sounds like everytime someone I think is amazing in something and they are at the height of their popularity, all sorts of contractual and legal woes begin ... sigh.

First off, Soompi is always worth a try. The threads index in the KPOP forum, looking for the artist that sings the song(s) you're interested in, is the place to start. There are quite a lot of lyrics and occasional translations of, er, varying quality, though they're mixed up with a lot of squeakings and gushings and oversized graphics. But that's Soompi as we know and love it.

For anything other than the latest songs, a good resource is the search form at
http://www.cix.co.kr/player/jetaudio/lyrics.html
The left hand box is "title", the middle box is "artist". You may get some results via English input, but to get to everything that's there, you will need to input suitable Hangul terms. If you can't "drive" a Korean IME, you can cut and paste the words you are looking from from mixed Korean/English sites
On the results screen (if you get any!), the l.h column is a list of song titles, hyperlinked to the lyrics. The second column is the artist's name, hyperlinked to the same list in a different (fairly obvious) format. The fourth column is the language of the lyrics the link in the l.h. column goes to. Mostly this will read 한국어, but there are occasionally English versions as well.
For lyrics of new releases (Korean only, of course), I personally tend to go to http://www.melon.com (though there are a lot of other similar sites with the same sort of content). Scroll down to the button labelled 가요 and select it. On the next screen, look in the l.h. column menu. The second item down is labelled in English as "Top 100". Choose that and you'll get a listing, with against each song title a little 'document' icon. Click that and a window will pop up with the lyrics. The first item in that l.h menu, above "Top 100" takes you to a list of albums, displayed in order of release date, newest first. Click on the cover icon of any album and you'll get a playlist, and for each song there's a document icon (as in the top 100 listing) that takes you to the lyrics.

"at least I can translate ^ ^ via internet"
Hmm. That's optimistic. Web translators are pretty useless for lyrics, or anything else not grindingly prosaic and literal.
Take the first two lines of a well-known Loveholic number ( 그대만 있다면 on their third album)

Off we go to Babelfish, who swims back with:

Day it loves and it leaves, possibility Ubs
who will believe you end which weeps cyo

Love left the day by saying,
Of course you can say you believe in tears, 116

Well. Korean is a notoriously hard language to process automatically, but the machines fall down badly at the very first word, which they take to be the noun 날 "day". It isn't. It's a pronoun, the very common contracted form of 나를, "me" (the object of the verb "사랑해", "love" that follows it). Actually, according to my ears at least, Jisun actually sings the uncontracted form 나를, which might have given the machines a bit of desperately needed help, but too bad. They both go downhill, or down precipice from there, though what sort of impact jolt causes Google to come up with "116" is beyond me. Perhaps it's some sort of rude joke I'm too old to understand.

On the way, they are both completely foxed by another common expression ~을 수 없다 , "cannot", though they both grab on to the 수 component in isolation and come up with "possibility" and "can" respectively. But as well as overlooking the negative, they also fail to attach that component to its proper main verb, 믿다, "believe", even though that component is plainly present in the only place it could and should be in the sentence. So they also fail to see that the main expression is "I can't believe" and that what the singer can't believe (moving from the backwards from the end of the sentence, which is how Korean works) is 그대의 말을 , "your saying/words", and that what these unbelievable words, spoken 눈물짓던, "accompanied by tears" amount to is that the person concerned 떠난다며, "claims to be leaving [me]" 날 사랑해서 "because you love me".

Apart from use of the 며 particle there (indirect speech in Korean is massively complicated) this is pretty straighforward; but it is plainly way beyond what either system can cope with. Even the brain of a ageing beginner like me can come up with

I can't believe you when you say, tears in your eyes,
that you're leaving me because you love me.

Which may not be perfect, but at least makes sense, and sense of a kind I hope is not too far from the original.

Short of relying in relatively scarce and not always reliable subs and translations, the only way to make real sense of Korean dramas and songs it to get stuck into learning the language. The main ingredients for successful language learning (after infancy) are roughly 20% talent and 80% motivation. The rest is a matter of effort. But most people who love Kdrama and KPop have the motivation already, and that can make the effort painless, even fun.

Yeah she's is coming back. I was wondering when she is going to being any movies or dramas.

Thanks for the news.

Thanks Gramps, I guess that it really helped... I got a long way to go:). But thanks for ur explanation, I really appreciate. ^_^