The perils of historical accuracy

“Circle lenses in the Chosun era?”

Sageuk fans following MBC’s Yi San have voiced a complaint about a part of the drama’s set. That’s because Yi San, which is set in the Chosun era [from 1392 to 1910], is using the sets from the SBS drama Seo Dong Yo, which deals with the Baekje nation during the era of the Three Kingdoms [57 BCE to 668 A.D.]. Using the internet, viewers have compared the photographs of the palace sets appearing in Seo Dong Yo and Yi San, noting, “I might not have known otherwise, but I wonder if it negates certain aspects if a drama set in the Chosun era is using Baekje-era sets.”

Notably, both dramas were directed by the same PD, Lee Byung Hoon, which fans have also pointed out. I think this one’s a tough call — because in producing a historical drama dealing with real-life events, one has a responsibility to be as faithful to the truth as possible. A certain amount of fictionalization is necessary, of course, but shouldn’t outright defy the truth. A time difference of an entire millenium IS quite a stretch for both productions to have shared their sets.

On the other hand, there’s the issue of practicality and money, and a viewer has to suspend a certain amount of disbelief — it never bothered me (much) that Alias, for instance, would shoot its Moscow and Iceland and Tokyo scenes all in Pasadena.

The ladies of “King and I” 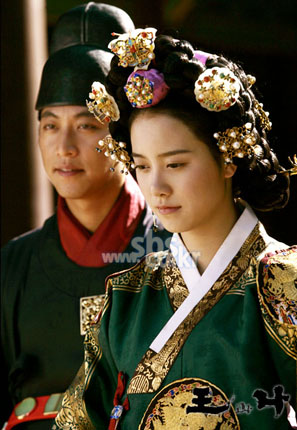 But then, you have this, which is a different thing altogether:

Not long ago, the female actors in SBS’s sageuk drama King and I wore circle lenses, to strong viewer distaste. Viewers have made it known that they find these circle lenses, worn frequently by many female actresses these days to make the eyes [irises] look larger and rounder, to be out of place in a sageuk drama. When palace ladies and concubines recently were seen wearing circle lenses in their scenes, online message boards were full of criticism, saying: “As actors appearing in a historical drama, I’d want them to dress appropriately as professionals.” In response, producers of King and I expressed their intentions to pay more careful attention to those aspects.

Personally, I think money and production limits are mitigating factors, and I can overlook the first issue to an extent (it does depend on how egregious historical accuracies are. If they’re not very obvious, then cut the guys some slack). Circle lenses, on the other hand, are pure vanity, and even if an actress is in the business of peddling her beauty, there are limits. I can’t see how using them ADDS much to a drama’s value, or at least enough to offset the disdain and drop in viewer loyalty over the display, especially since sageuks are generally known to be very accurate regarding the clothing and appearances of the eras they portray.

Tags: King and I, Yi San

Ah, I've always just wanted to wear those pretty hair ornaments.
But the yeah, the circle lens are out of place. >.>;

Circle lenses are cosmetic contact lenses designed to make the iris of the eye look bigger and supposedly more attractive. Like an anime character or whatnot. Sometimes they're colored (blue, purple) and sometimes they just add a ring of color to make the dark part marginally larger and rounder.

Wow, Korean viewers really has sharp eyes, they even notices the circle lenses. thanks Toya for asking, i don't know that too =)

response to beng: I know, seriously! wow. And most of them have glasses.

you mean they can tell they wear circle lens?! its so funny...

Oh~ those circle lenses !! But I'm a bit confused... was it about the historical sets or the circle lenses specifically??? and yeah, korean viewers have a sharp eye...

the sageuk dramas must have almost all of the things accurate then because viewers are complaining about such a little thing as circle lenses. (is the use of circle lenses common outside of korea? this is the first time i've heard of it. but i have big irises...)

reuse of sets can be a big error, however, if there are things in the sets that are anachronistic.

reuse of sets is so common - bewitched's house uses the same rooms as jeannie's house. many people live on same streets when one examines the backdrops.
but in historical dramas, this can lead to funny interpretations. whatever happened to enjoying the story and the acting and letting oneself get lost, not worrying about the sets. i would think the audience is aware that the shows cannot be filmed in the actual historical time and place as it was, and that what is important is the relations, ideas, beliefs, world views, events, people, emotions. now, inaccuracies in these is another story....

wow...i am soooo out of the loop cause i didn't think there's such a thing as circle lenses even existed! i just always assume they're regular contact lenses. i agree with waywardbird that reusing a set is totally common. hk tvb is famous for reusing their sets and costumes. they think they can fool the viewers by adding something here or changing the stairs of the house to the left but it's the same set and and costumes. it's really a no big deal.

They are just for entertainment and since I'm not korean I don't really know too well about the history and culture so it doesn't bother me but I guess it does for other people.However, isn't the purpose of a drama/movie is to enjoy instead of criticisizing? Well, one can criticize but let's do the enjoyment first. I usually spend my time enjoying the movies instead of questioning then afterwards if I think it's worth the sarcasm/critics I rewatch and find the flaws. Still, I think my time are worth more doing something I have to do then worrying about little details. Lol, cut the directors some slack. ^_^