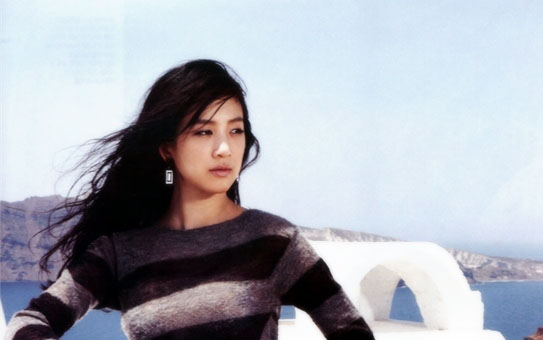 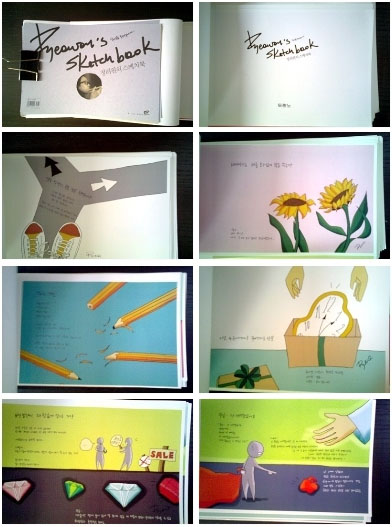 As she’s a devoted Christian, there are messages that accompany the drawings that refer to her faith. She posted the notice on her cyworld page, and explained that her pictures were drawn purely out of enjoyment: “I haven’t received formal instruction, it’s just that I wanted to express myself.”

Jung Ryeo Won’s Sketchbook is planned to be released in bookstores, but no publication date has been given.

In other news, Han Ye Seul recently gave an interview in which she named Jung Ryeo Won as the star who’s the “best fashionista”:

“She’s also a friend, but Ryeo Won has a certain quality where she can express herself well and find things that suit her. She wears clothes well, in a way that the average person can easily follow.”

I’ve got to agree with the fashion part; Jung Ryeo Won has always struck me with her innate stylishness. She’s not the most traditionally pretty but she always looks great, in a self-assured, individualistic way.

Lots of other stars look good; that’s no big deal since that’s part of their job description. But Jung Ryeo Won always looks really comfortable in her clothing, like it’s an effortless thing for her to throw something on and make it look interesting and fashionable. She’s also the only actor I’ve seen modeling clothing who actually makes me want to wear the clothes. 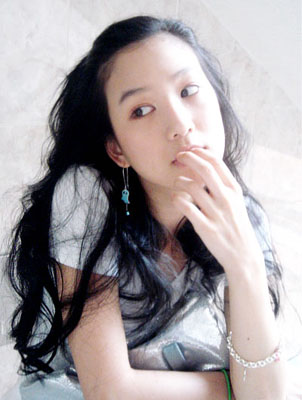 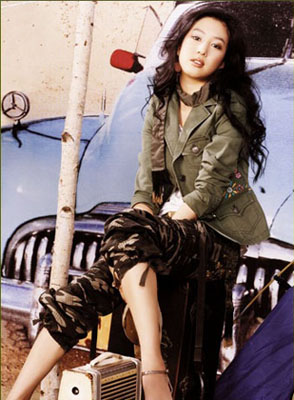 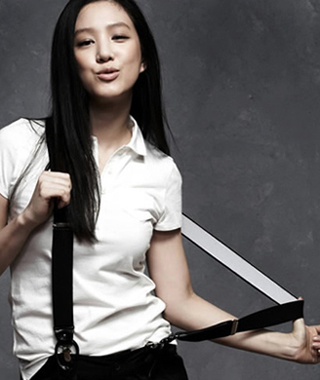 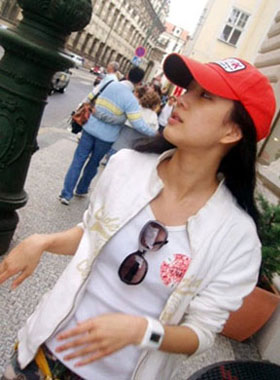 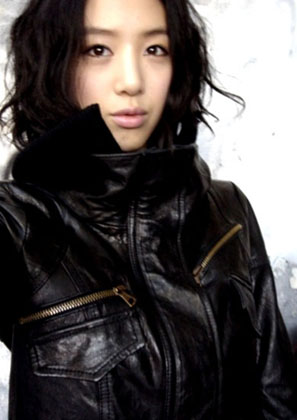 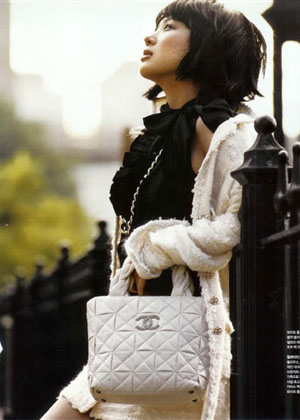 I didn't know that she can draw :) I like her fashion sense.

the drawings are ok, but nothing special in my mind. it seems like she could be a children's book illustrator. its nice to see actresses branching out from their regular careers.

I love it when people think they're important like this. Things like this are nothing more than exercises in narcissism. She can get it publshed, not from talent, but because of accessibility...in other words, she's a celebrity.

here is my book to publish.

I saw a bird fly. Then the bird sat on a branch. Then I saw the bird poop. The end

wow... if you didn't tell me, i wouldn't have known it was her from that (top) picture. Looks nothing like her. Oh yeah, the drawings are cartoonish and childlike. Makes you want to run out and buy a copy of the book......NOT! Still, she is a fine actress.

The thing with "celebrity-wardrobe" is that it looks good in pictures (and in certain poses) but in real life it doesn't look as good...

Yes, I totally agree with you on the fashion!! Thank you for sharing

You don't think she's pretty? I thought "Wow, what a gorgeous girl!" the first time I saw her on MNIKSS. OK, maybe since I am not Korean I have no clue what is traditionally pretty is Korean culture but I've always thought she is very pretty and stylish.

However, I agree about her sketchbook publication. It's not very good and seems almost narcissistic to publish something of that pulp and zero-artistic latency. Still, if they knew they have clueless fans with more money than sense ... why not eh? *shakes head & goes back to reading Neil Gaiman ...*

please, next thing you know, they are going to publish her scribbling she does in paper napkins...don't they have anything better to do?

Maybe I think it was cute that she has such a hobby but to publish it just ruined the whole cute image for me. I don't know but it doesn't seem publish-material. ^^ It's cute if it's posted on her webpage but to sell it, haha...

I really like her ~ she has a certain quality about her that makes her look so unique. I don't know what it is~~I agree though. She makes me want to be able to dress like her hehe

aw... you guys are too mean.. she's no picasso but she put something personal out there.. & sure it seems kind of narcissistic & commercialistic.. but she's a celebrity.. doesn't that come with the territory?

Hmmmm....there appear to be a few of haters out there. Generally, when we buy products produced by celebrities that are further off-shoots of their person, we do so because fans like to get closer to those whom they admire. If you don't like the product, I don't see any need to go up and throw blood on the artist. Just put it down and walk away. How difficult is that?

By the way, speaking as a male................she's flat out gorgeous! She looked great in those goofy pigtails as "Bokshil" and hasn't looked less than attractive, to me, ever.

Good for her. =] Although the pictures aren't as eloquent as one might expect, it still takes a considerable amount of talent to draw like that at all. It's nice that she's branching out in a more personal artistic way. And for the people who think that she's being narcissistic, remember that she said that the pictures were solely for her enjoyment. Like robbo4 said, the publication is just for the fans who want to know her better.

And as for the fashion part of it, I agree. She always look so comfortable in her clothes. I remember she said that when she was in Chakra, she felt she always wore uncomfortable clothes...or clothes that were uncomfortable to her in the sex appeal department. (They didn't really explain.) Perhaps that made her look further into her own fashion choices...

Oh, I didn't mean that she's not pretty. I think she can be really beautiful -- but it's not a conventional type of pretty. But she's got that sense of being very comfortable in her skin, stylish but not necessarily vain about it, which isn't true for a lot of actresses. And despite her accent, she's one of the few actors who really CAN speak english fluently, comfortably, without coming off like she's memorized her lines. In her scenes with Daniel Henney in Samsoon, I thought (despite his general woodenness) that it often sounded like the camera had just caught two people conversing.

i really love JRW's style, reminds me of Jennifer Aniston

I think she's pretty!
I like her style too! Didn't you say she cut her hair or something? I think longer hair suits her better...
Thanks!

I like her in her portrayal of a provincial girl opposite kim rae won in what planet... i think for the first time i saw a leading lady having chemistry with KRW... on screen of course... or maybe because KRW have captivated me in here... the last time he did this to me was when i watched him previously in ...sorry i love you (?) where i thought he was so endearingly handsome (that scene where he had his girlfriend rub his mane for good luck and streak of confidence - i think). I thought he (KRW) was being so effective there. Yet now I watch him again with Jung Ryeo Won - that's it! His (KRW) masculinity is way above known scale (mine of course). Others would probably have better words for it. Sorry not so good in describing.

love her!
and seriously, no one's forcing you guys to buy the book, she already said, its just a platform to express herself, prob to her fans -.-

your my idol...iloveyou so much

OOOOOHHHHHHHHH YOU ARE VERY NICE AND YOU HAVE A BABY FACE AND YOU ARE YOUNG SO REALLY YOU ARE A GOOD ACTRESSE I LOVE YOU WHEN I WATCH YOUR ROOLS IN MI LOVELY SAMSOON ½HITCHIN½,REALYYYYYYY YOU ARE NICE AND YOU DO YOUR ROOLS VRY GOOD
SAFA

your so really beautiful so much your my idol talaga.......soon to be meet you in person i luv you....take care always...muahhhhw...

hai jung ryeo won i m your diehard fan i am kate from philippines you know what i really really like your all movies... one of those are which star are you from...i hope i watch a lots of your movies here in philippines soon.. just always take care there.... and always smile...muahhh

i love your work

I LOVE RYEO WON MORE THAN MY WIFE.

WHY you charm me ? I falling for you.I love you so much.

WOW WOW she is a beautilful women.