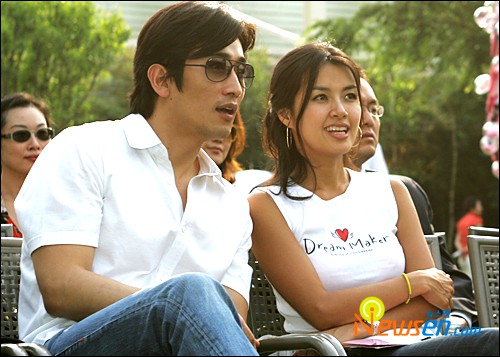 Who else looks at celebrity power couple Cha In Pyo and Shin Aera and remembers the old-school hit drama they were in together back when they were both young new faces, Love Is In Your Arms [Sarang eul gudae eui poom ahn ae]? I think it’s rather amazing they’ve stayed married (and both working over the years) for so long — over twelve years — and now they’re in the news again for adopting a baby girl.

Although Korea’s known for having been a large source of international adoptions, the practice is less common domestically, for lots of various reasons (which is why they put up campaigns like this one). Perhaps that’s why the couple has been on the receiving end of lots of praise for adopting, although they’ve expressed their surprise at the public reaction; they didn’t think it would result in such praise.

The couple already have two children (their second was also adopted, in December 2005) and had expressed intent to adopt again, but waited till now to allow their younger child time to adjust. Their biological son, Jung Min, is 11 years old; sister Yeh Eun is 4; and the youngest, new adoptee Yeh Jin, recently reached her 100-day milestone.

Tim – “고마운 기적” (Thankful miracle). I could do without the smooth jazz intro (whoa, shades of Kenny G) but otherwise a nice ballad. [ zShare download ]

*raises hand* I remember "Love Is In Your Embrace"! Man, I remember loving that show...Wasn't it written by the same (now-married) writing duo who penned "A Thousand Years of Love", "What Happened in Bali" and "Super Rookie"? The LK (Lee-Kim) Couple?

Anyway, it's great to see people adopting, whether they're celebrities or not. Hopefully some people will read this news and be inspired to adopt themselves? Korea really needs to step out of the Dark Ages when it comes to the issue of adoption...

I always love this couple! They're so nice by adopting..I wonder why they don't try to have another baby by themselves? ( not that I against the adopting thing.. I'm just curious..:P )
I ever saw a picture of Cha In Pyo with their 1st daughter, they were so cute!
I believe they are such good parents, so lucky for the children!

Love is in Your Arms. . .wow, that takes me back. It really is something that they're still together. Kudos to them for adopting.

this really is an inspiring story... i give them props for adopting... & cha in pyo is like old school hallyu...

I don't remember that one, but I do remember "Byul eun nae gah seumae"...but I was also rather young when that came out too. I only recently (in the last 4 years) rewatched it as an adult. Still love it though!

I love this couple! Goodlooking, and very charitable. I hope more blessings come for them!

I saw Shin Aera on the KBS Morning Show a few months ago, and I thought she was so beautiful. The photos and video she shared of her family were wonderful. Dahee Fanel, I couldn't agree with you more! I think it is very cool that they are open about adoption and promoting domestic adoption within Korea. Cha In Pyo and Jang Dong Gun were in a music video years ago that was critical about Korean babies being adopted aboard. I can't think of a better way to change attitudes about adoption in Korea then to actually do it! Thanks for sharing this story javabeans.

My parents adopted 2 of my siblings, although they like teasing me saying I was adopted. Heh. Anyways, hurray to them for adopting. Every kid needs a good home filled with love. It's not always possible, but hurray to those who open their hearts to such an option.