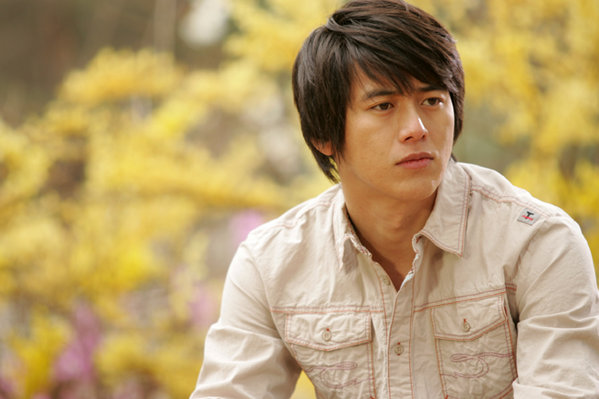 Actor Go Soo won’t be discharged from the military for a couple months yet, but already people are looking to his comeback — and while most other actors choose to drum up press and make their triumphant returns to celebrity in high-profile films or dramas, Go Soo’s return will be, unusually enough, in theater. Or maybe it’s not so unusual — of all the actors and celebrities summoned to fulfill their civic duty, usually with endless fanfare and bids for attention, Go Soo has been one of the more understated servicemen, remaining low under the media radar. He began his service not long after his last drama, To Marry A Millionaire, wrapped in late January 2006.

As his release will come at the end of April and the play begins running in May, he’s not giving himself much time to enjoy the break and is jumping right back in the thick of things. In fact, he’ll spend his last leave rehearsing for his role. The play he’s chosen as his return project is The Return of President Eom, to which he was invited to perform upon the recommendation of his acting senior Jo Jae Hyun, whom he met while working on the 2001 SBS drama Piano. According to a source close to Go Soo, “After acting in Piano, Jo Jae Hyun is the senior whom Go Soo most respects.”

In the play, Go Soo plays the young scapegoat of the titular President Eom; his young, simple-hearted character is reduced to heartbreak and tragedy. Normally I don’t love tragic dramas, but theater is a different beast, and boy would I love to see that.

I'm really looking forward to his new projects as I have enjoyed his work so far.

omg, I remember this guy from that sitcom....uh, where he played that mute trumpet player that had a crush on Song Hye Gyo's character. God that was back in the day! He had that tragic air about him (it must be the sad eyes), I could totally see him in a"young, simple-hearted character is reduced to heartbreak and tragedy" role.

i remember go soo from green rose w/ lee da hae... he looks exactly like my uncle when he was younger according to my mom... it's nice to know he's back...

yey!! I lourrrve Go Soo.. Looking forward to his come-back ...

I remember him in the movie Some (2004) which was weird in places (and was one of the first movies I watched in Korean), but I enjoyed his performance a lot. Also enjoyed the first half of Green Rose so I am quite interested to see his next project.

I agree that Go Soo has that tragic air about him - also a serious gentlemanly presence that is so appealing to my female hormones and a looker too helps! LOL He acted well in Green Rose, PIANO but being a hopeless romantic that I am, my favourite role he played was in the little known drama "When a Man Loves A Woman" with Park Ye Jin of the recent Saguek fame - Dae Jo Young. They both had great chemistry and I'm a total su_ker for the less popular/tom boy gung ho warm hearted female getting the man - oh Park Ye Jin was a hoot in trying to get Go Soo - quite a typical melodrama but I LOVED it ha ha! Go Soo shi, I'm looking forward to your return! Good Luck!

I totally love this man. His sexy smile makes my heart melt...LOL.
He has so much talent and not to forget how intelligent he is.
I love Green Rose, he's totally a hottie. I think that him and Lee Dae looked good and have electrifying working pair.
After watching How to Marry a Millionaire, he captured my respect and adoration for him. What a remarkable character he portrayed.
Go Soo, please do return safe and well. We will wait for your new project and whatever it may be, we will always be here to support you.
Take care...God bless...Much love!!!!
Mwah!!!

He looks better in short hair....nevertheless, I pray for your safe return and we await your next project!! =D

Ohhhhh...looking forward to your return. (As if he can read this...nevermind). Anyways, love your character Kim Young-hoon in To Marry a Millionaire and in Green Rose. Good Luck!

Hmm....I'm surprise that now GO SOO is more looking good.In this drama, Will it snow fr christmas?you'llcan see he has more improve in acting and woaa...hh,he looks slim and got six packs body.