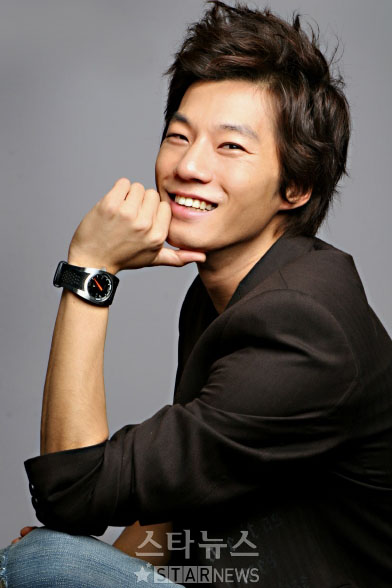 Actor Lee Chun Hee (The Great King Sejong, Conspiracy in the Court, Only You) is taking responsibility (owning up, or bogarting credit?) for being the reason behind the rumor that fellow actors Gong Yoo and Im Soo Jung are dating.

The gossip stemmed from an incident last year when the two were seen together at the airport after a trip to Jeju Island; the rumors of romance were soon denied by both sides.

Now, Lee Chun Hee explains that a group of friends who’d all been close since the days of their debuts had all gone on a trip together to Jeju Island prior to Gong Yoo’s military enlistment (which began in January 2008):

“But at the airport, we were discovered by students on a school excursion, and they swarmed around us. The other friends were able to withdraw safely, but only I was left behind in the crowd. Since I had to rejoin my party, they opened the door [to the closed-off room] to let me in, and the students in front of the door got pictures of Gong Yoo and Im Soo Jung. And the next day, the scandal broke.”

He adds jokingly, “I went grocery shopping with Im Soo Jung just with the two of us, but nobody was interested in that at all. Frankly I was envious of Gong Yoo.”

On one hand, it’s obvious that rumors get blown out of proportion all the time and “scandals” get made out of nothing. On the other hand, we’re hearing this just as Lee Chun Hee has a new movie to promote, which always seems like a time celebrities love dragging out dishy old stories to generate some press. (His romantic drama Humming, also starring Han Ji Hye, opened this week.)

Aww, give the cutie the benefit of the doubt, sarahbeans! I don't think he's being opportunistic and using this to get some media attention. Surely my favorite actor in Conspiracy in the Court will not do such a thing. I refuse to believe it, lol. LOVE that pic of him, btw.

Psst, I'm thrilled that Kim Myung Min is in your new header. *muah!*

I found Lee Chun Hee's character in Only You kind of obsessive and dorky, so I'll have to break my stereotype of him in order to see his "cuteness". I think I'll check out Conspiracy in the Court again.

PS I'm doubly thrilled about Kim Myung Min making it in your header because he's so cool, and you know a star has made it when he apppears on the Javabeans' headers. lol. Thanks.

OMG!!! i just had to comment for the first time here b/c you just made my day...i love this guy! i know he's not considered cute by normal standards but i'm not normal! :P there isn't a lot of news on him so you got me all excited.

haha. thats funny and cute. i'm sure he'll get his turn of rumors once he's a bit more famous and mainstream. Humming might just do it for him. thanks javabeans, that whole rumor was a bit ridiculous. nice to see it clear up.

he's definitely a cutie.. i too have odd taste in men :D i didn't get to finish the drama but i thought his character in conspiracy in the court was so cool... i hope he does well in humming.. though i'm not happy about him appearing with han ji hye.. that girl looks like a total maneater.. so far off from her characters...

It's not weird to think he's cute, right? 'Cause he tooootally is. I didn't like him so much in Only You, but that was just his clingy, lovelorn character. This particular pic makes him look all the more appealing, imo. heh.

if u like him by looking at this pic, then u should totally watch family outing (by SBS), u'll find out that he's got a good personality and funny at the same time!!

dude u guys, all you have to watch is Family Outing. He's the most hardworking. clusmy, innocent, cutie you'll ever find!