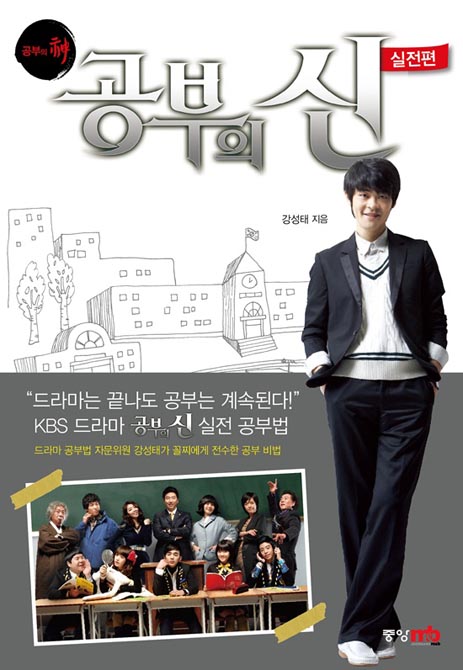 KBS’s television series God of Study may have left airwaves, but producers aren’t letting its popularity die away: production company Drama House has announced that they’ll be publishing both a tips/techniques guide containing the study methods promoted in the drama as well as a workbook. As the show is based on a Japanese manga and drama (Dragon Zakura), this book will tweak the tips of the original to suit the Korean education system and promises to give techniques that will produce real effects.

The drama enjoyed a strong run, not just because of its adorable teen cast but also because it earned favorable responses from mothers who cottoned on to the somewhat simplistic “study hard if you want to succeed” message. Much of that appeal was due to the studying methods that were employed in every episode, and parents even recommended that their kids tune in. God of Study is different from other successful dramas in that the show focused more on studying methods than it did on following traditional dramatic structure and narrative development.

(That’s also why I zoned out a third of the way through, because I want a drama to have more emphasis on, well, drama — but I suppose it’s a matter of different strokes.)

i tried watching the 1st eppie and fell asleep. it was also a bad idea that i refreshed myself with the jdorama then quickly diving into watching God of Study. couldnt help but compare. im still planning to watch this when my school ends.

hmm, i dont know how much they tweaked the tips but the studying tips from Dragon Zakura were amazing. my favourite one was when learning English. i did the exact same thing, only when it was learning Japanese. so im quite curious on what type of tips they had in God of Study. did they do the question-answer in a ping-pong style?

@ gala. Yeah, they did the ping-pong technique during their math class. It was shown during the firsts eps. Try to watch GoS. I am not sure if it would be as good as Dragon Zakura ( bec. it was the original & it’s still your preference that matters) , but still try to. It’s really good.

does it really work :O
than i will start watching.
recently lazy to watch dramas.

I want the guidebook ;o i miss god of study..
what i liked about the show was i felt i could relate to the students, since im a student (;

i want to buy the guide book yay i love GOS(i'm still on ep 6!) !
it really help me in my studies especially in math hehehe xD :)
iloveYSH!!!

i've seen Dragon Zakura and love the studying tips they have especially the memory tree. i'll start watching God of Study as soon as I finish reviewing for my exam....i need that guidebook now!~

wow... this drama series is really awesome... i want to have that guide book.. i hope they'll publish it in english too... :)

I would like to have that guide book. I wish it could be available soon and even be distributed here in the Philippines.. I will never forget this drama. Really amazing!

@ gala. Yeah, they did the ping-pong technique during their math class. It was shown during the firsts eps. Try to watch GoS. I am not sure if it would be as good as Dragon Zakura ( bec. it was the original & it's still your preference that matters) , but still try to. It's really good. :)

Ohmomo! I really miss GoS. It has been 1 week since I finished watching and still I can't stop thinking about it. I think it's because I can really relate to it and the tips are so great..Every episode has its inspiring touch. I'm currently a junior student and when I first watched this, I will be soon taking my exams. And so, I stopped at ep6 and decided to go on after. Now, I still can't get over with it.

At this very point, I'm downloading & listening to the OSTs and it makes me wanna watch it all over again. It reminds me of the sleepless nights I had while watching. Hah! If only it wouldn't be a waste of time, I really will.. I wanna go back to each and every scene and feel every line...

I <3 GOD OF STUDY! I even have a DVD already.. An additional for my collection of k-dramas.

i wonder if the learning methods are the same in gos and dragon zakaru? if they were the same, i would not watch dragon zakura. gos rox bw!! :> YSH!! <3

GOS the very best drama ever.. anyways, where can I find the guide book?? please anyone help

GoS make my spirit of study up^^