Teaser trailer for Like the Moon Escaping From Clouds 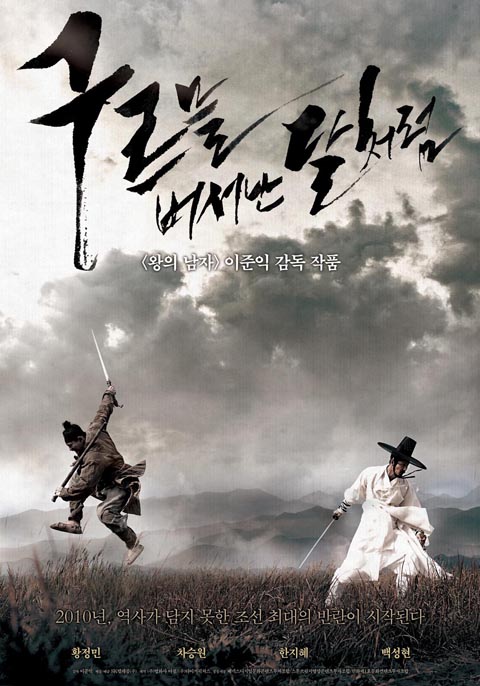 Coming from King and the Clown director Lee Jun-ik, the new film Like the Moon Escaping From Clouds has been drawing buzz for a while now. The production released a new teaser trailer on March 4, which largely features two of its four main actors facing off against each other: Hwang Jung-min as a blind swordsman and Cha Seung-won as a leader of rebellious forces fighting to overturn the strict social order. Cha declares, “Let’s wipe out this rotten world!” and Hwang says, “A swordsman must hide behind his blade.”

The film is set amidst the Japanese invasion of Joseon Korea in 1592, and Han Ji-hye and Baek Sung-hyun (looking remarkably like a young Jung Woo-sung, no?) also star. The movie is planning to release later this year.

Hm, I wonder if the director feels like Chuno stole his thunder. No doubt the stories are completely different, and even the tone (and with such a lineup, I’m going to expect fantastic acting here) — it’s just that the visual splendor of an artistic action sageuk like this is not quite as fresh with Chuno in our recent memories.

Hmmm...yeah, it does "feel" like Chuno all over again. Esp the colors and the fading out of the opening and closing credits?

But this is Hwang Jung Min and Cha Seung Won we're talking about. So it's OK for me.

And I know CSW's hot and all, but HJM just stole every single minute in that preview!

Can Cha Seung-Won get any hotter?

It looks so good but I can't stand sword fights and the blood splash T.T which is a major reason why I'm staying away from Chuno....

It could be exactly like Chuno for all I care: with that cast? I'm watching it! *g*

its Chuno without Lee da-hae!
i'm in.

Baek Seunghyun is becoming more handsome the older he gets.

Wow, with the mustache, he does sorta look like a young Jung Woo-sung.

Thank you so much for the trailer! I have been looking forward to this. :)

looks incredible! even though it's coming out in korea next month....it probably won't be coming out in the US on dvd for another 6-12 months

is that han ji hye??
also, i thought the guy with a mustache was shin dong woo
ah, i loved watching "cloud stairs"

I think the actors will bring more dramatic weight to this series, so it's no loss if the action is not the primary focus like in Chuno.

This is looking so hot already. Can't wait.

I wonder where I can buy Korean movie posters.

Really looking forward to this! Not only do I love the actors (CSW! and especially HJM!) but I've liked every Lee Jun-ik film I've seen (loved King and the Clown)

Any movie or drama of CSW is A okay with me. Whether he is the hero or the villain or play just a cameo role, I will anticipate and watch with excitement! He is an excellent actor. He is a 10 in my book!

I think with a blind swordsman it sounds more like Zatoichi to me, and in the pictures they released Hwang Jung-min had the same grimaces as Zatoichi.

WOW! (the only word I can manage to mutter) :D

It does have that strong Zatoichi vibe! With Hwang Jung-min, Cha Seung-won (our dearie Gookie! and I miss his deep thick voice) and Lee Jun-ik at the helm, a must watch!

Don't know why. I have this vibe telling me HJM is going to steal this one away.

ooo this looks good! and it has han jihye and baek sung hyun! can't wait!!!

baeksunghyuuuuun!
i fell in love with him because of haeshin, so it's good to see him in a historical piece again. (:

Oh man I Love director Lee Jun-ik. I am high anticipating this movie.

And of course, who can deny the charm of Hwang Jung Min?

Can't wait to see it!

I'm interested in this movie as well! I agree that Baek Sung Hyun kinda looks like a young Jung Woo-Sung and he's one of my favs! CSW yes!