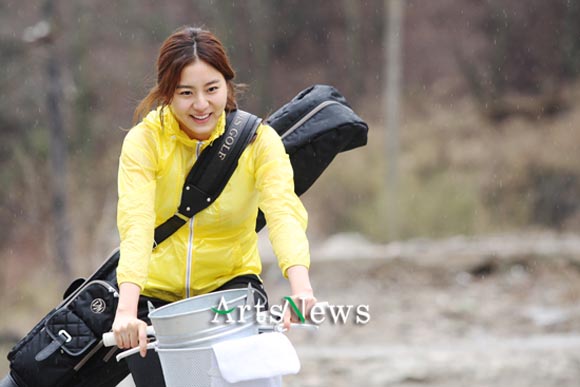 The first still to be released from golf drama Birdie Buddy is of its lead actress UEE, the pop star of girl group After School who has recently turned to acting. Her role as a bratty pop star in last year’s You’re Beautiful was a character we loved to hate, but whom she played pretty well.

In this, her first leading role, UEE will be portraying a completely different type of character; her Mi-soo grew up in rural Gangwon-do and works her way up from golfing rookie. In the above still, she rides a bike with her golf bag slung across her back, on her way to the club to practice.

Birdie Buddy is an adaptation of a manhwa and is currently in full production swing. It is the product of a partnership between Group Eight and Hunus Entertainment and marks the second time these two entities are teaming, having previously done Tamra the Island. (Hunus also produced The Sons of Sol Pharmacy while Group Eight was the company behind another manhwa adaptation, Boys Before Flowers.)

i play golf and wow... she must have some balance to bike with her golf bag strapped behind her considering she's probably got her driver, woods, wedges, irons, putter, umbrella, the balls, the tees, the gloves, etc etc. in it. :))

i will be closely watching this to see her golf swing. if it sucks, i quit. :))

This sounds like Invincible Lee Pyung Kang (sp?) the drama that came out late last year. I'm not too sure I'm looking forward to it esp. since most of the actors seem kind of mediocre.

Lately I've been becoming a fan of Uee, so my interest leveled went up a wee bit.

But anyways, I've figured out it won't be any use to expect professional golfing ability. It'll probably be, "If she looks like she's actually golfing (repeat: if it LOOKS like it), it's A-OK."

Although my impression of Birdie Buddy is a lot better than Pro Golfer Hana, knowing UEE's athletic capabilities:

Pro Golfer Hana might be good. IDK as I haven't tried it yet... Though I'm happy Birdie Buddy is staying away from glitzy pink and such.

Oh why did she have to dye her hair? I really really love her glorious black ebony hair.

maybe the golf bag is empty? :)

I don't like the red hair. It looks so fake. Red highlights are good but I don't like it when Asians color their hair unless they are are teen idols or below 17. Your natural color is always the best because it looks healthy and shiny instead of dry and lifeless. Asians have the best hair on this earth. Embrace it.

Sort of reminds me of Rival with Kim Jaewon... except I didn't really get the point of that drama o_0

I loved UEE as the pretentious celeb in YB. It's hilarious how she's the "nation's angel" on screen and oh-so-not off screen. I found her character endearing everytime she goes into "acting" mode.

Maybe it's too early to say, but seems to me her character here isn't that special. Kdrama main female characters are given various backgrounds, a various situations, and various occupations. But there have been few options regarding personality. Hardworking, optimistic, kind, and self-righteous are about the four most common traits. And then sometimes she's dumb, sometimes she's not, but she's never brilliant; not even when she's successful. I don't see UEE's character here breaking that mold either. Perhaps that's why I'm watching MGY's character in CS with piqued interest (although her mindwork mechanism isn't ideal for me either), but that's a different discussion.

Actually, AFs w/ long hair get a reddish tinge, esp. during the summer (but yeah, this amount of red looks just awful).

Many AFs actually have to color their hair to get the jet black look all the way down to the ends.

I Loved her acting in YAB :)

Her character's in YB is so endearing to me... It's So different compare to another bitch on another kdrama....even I Love her char more than PSH's char in YAB... there's something wrong with me lol... hope her character will be as funny as Yoo heyi char, lol... even My SIm's name in SIMS3 is Yoo Heyii hA! lol

I kinda wish she gets another bitchy role because I loved her as He Yi. Other mean characters annoyed me, but I found her entertaining and hilarious.

Sports dramas did terrible last year in ratings. I wonder how Birdie Buddy will do.

Glad to see Lee Da Hee is already in another drama after Chuno.

@missjb
yeah I thought the same thing too about her in YAB. She's the only villain female character who actually I really adore instead of hate.

she looks likeable now..unlike in YB! :)

Will definitely watch this.