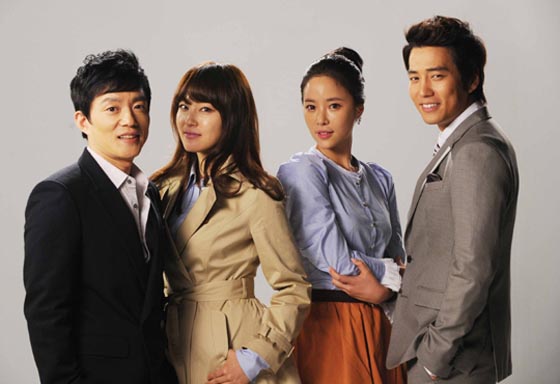 The first still is out for SBS’s Giant, which premieres in May. From left to right, pictured are Lee Beom-soo, Park Jin-hee, Hwang Jung-eum, and Joo Sang-wook. The cast, writer Jang Young-chul, and director Yoo In-shik gathered on April 2 at the SBS Ilsan Production Center for the drama’s first script reading and rehearsal.

Giant is a special production series that commemorates SBS’s 20th-year anniversary. The story begins in the 1970s and follows three siblings as they grow up, with the focus on “one man’s ambition and love.” (How many times have we heard that, eh?) Lee Beom-soo plays that lead character, Kang-mo, while Park Jin-hee portrays his love interest and Hwang Jung-eum plays Kang-mo’s younger sister who becomes a famous actress. Young actors Kim Soo-hyun and Nam Ji-hyun will be featured in the childhood portions.

The drama premieres May 10, following Jejoongwon.

(I suppose the photo is meant to convey the drama’s ’70s feel, but they really managed to take some very good-looking actors and made them look dated and dull, didn’t they?)

I like Lee BeomSoo; he is real good in the film Descendant of Hong Gil Dong. Anyone else watched it?

And Park JinHee is mesmerizing to watch because she looks a lot like my favorite actress Brigitte Lin (from Taiwan).

That photo can get more attractive if they ps the background a younger lively color instead of a matte grey. Agreed?

I didn't know Ju Sang Wook would be in this. I burst out laughing at his smiley face. Just finished That Fool and this man can not act, sorry. His eyebrows and smile resemble Song Seung Hun and yes, he's handsome. But his acting is so boring!
And his character's name in That Fool was Kang Mo, Lee Bum Su uses the same here..what a coincedence LOL

I <3 joo sang wook so hadnsome :D
cannot wait to see this new drama
i find it funny that the childhood actors/actresses from wisfc are the same in giant

Yeah, this poster reminds me of the old ads you see of 60s soap operas. It's understandable, but still...

Joo Sang-wook always looks skeezy to me. o.O Why does he insist on acting?

But you're right, they do look dull. Not so much "dated," because styles are always recycling themselves anyway (more than once my mother has looked at what I'm wearing and said "I swear to god I owned that/those exact same top/dress/pants/shoes/jewelry when I was your age").

I'm not getting a 70s feel from this at all, actually. Then again, I'm not familiar with 1970s Korea, so what do I know?

will be looking forward to Park Jin Hee. She is a fine actress..

For a hipper glance at 70s-era vibe from Korea, check on Fashion 70s, everyone looked GREAT in that drama, well, CJM without clothes always looks great, but he looked good in his tight tight outfits, which were probably polyester.

Everything about this drama sounds "good" but nothing about it implies "great."

I'll pop in for an eppie to see what's up. But the second it radiates EoE 70s vibes I'm out.

yay! kim soo hyun and nam ji hyun will be working together again
they're both very talented for their age

Say I'm shallow but I want Park Jin Hee to be paired up with someone tall, fit & handsome.

@14
For what it's worth, Lee Beom-soo's last two dramas were both hits. (On Air, Surgeon Bong Dal-hee)

Is it weird to be more excited about the younger actors than the older?

On another note, I really like the color of Hwang Jung eum's skirt. the orange is actually really cute :)

Huh....I didn't even know it was a drama based in the 70's b/c that pic does not give off that vibe in any shape or form. I just thought it was sort of casual plain clothings for the modern time. With that said, I think Jinhee looks cute but then again, biased fangirl is biased =D

If you haven't seen Lee Bum-soo in a drama, you shouldn't judge based on looks. He may not be the tallest, or most classically handsome lead, but he's a terrific actor and he was the single best thing in both On Air and Surgeon Bong Dal-hee. I don't find him goodlooking or my usual type, but when I watch him act, he becomes very mesmerizing and attractive.

Lee Bum Soo is the only person that ruins this for me... I don't hate him, but I'm just not very fond of him either.

I'm surprised that the Korean netizens no longer run protests against the drama... I mean, after all, they managed to force Kim Myung-min out of the lead role by it. The way it sounded back then, it seemed as if the drama couldn't be produced at all.
So, has public opinion about this being a promotion for the current Korean president changed, or are they still protesting it?

It may be true that Lee Beom-soo is no Kim Myung-Min - but he is a heavy weight actor in my book. He can be both dramatic and comedic. When he is in a scene, you can't move your eyes from him. LIke ockoala said, he is the single biggest magnetic attraction in Surgeon Bong Dal-hee. He is not handsome or tall but there is an understated sexiness in him that is hard to describe in word.

Just can't WAit for rain to make his comeback in drama.

I'm so looking forward to this! Park Jin hee, you go girl! 2010 is going to be your year and pleasant year for me too to a lot of you :D

As for Lee Bum Soo, I'm not his fan. I've just seen one of his dramas, "On Air" and many other movies such as "Project Makeover", "More Than Blue", "Death Bell", etc. He's not good looking, but he has the charisma. The look that can glue you. I believe that this project will be a hit. Plus Park Jin-hee in it, it can't go that wrong.

Joo Sang wook is a great actor! Well done !
Fighting! I am you fan forever and hope others appreciate your talent.

Giant is a very good drama !All the cast act so well

You are so right! Joo Sang Wook is truly a great actor . He acts so well and He is the BIG MAIN reason for me and my family and friends to watch Giant.
Please watch Kimcheed Radish Cubes . He and park shin hye are such a cute couple and We are looking forward to his new drama Paradise Ranch in March 2011!
Good Luck to JSW and Giant!

Laughed so hard that some here said Joo Sang Wook can't act. Well well well weeeeeeeeeel hahaha in Giant he proved that he's awesome. And look at him today.. If you still said he can't, then maybe something wrong with you in terms of seeing an acting :D :D he might be unpopular like the others, but his skill makes him deserve to called as an actor!