Recently, Seo Taiji released a song called “Sogyeokdong.” From the music video and my limited Korean skills, I gathered that Sogyeodong must be a historical place. What exactly transpired there and what is the significance of the setting for Seo Taiji’s music video?

First of all, thank you Dramabeans for allowing in TK’s third person speak! Let’s listen to the music in question.

어느 날 갑자기 그 많던 냇물이 말라갔죠
The stream that used to be so big suddenly dried up
내 어린 마음도 그 시냇물처럼 그렇게 말랐겠죠
My young heart, like that stream, must have dried up too

*Translation note: Although TK assigned “it all” and “we” as subjects in this sentence, in the original Korean lyrics it is unclear who is opening his/her eyes, and exactly what is disappearing. Because Korean language does not require a subject in a sentence, this type of poetic ambiguity is common.

As the questioner gleaned, Sogyeokdong [소격동, pronounced “soh-kyok-dong”] is an actual place in Seoul. Located within Jongno-gu [종로구], it is in the heart of the old Seoul, abutting the Gyeongbokgung [경복궁] palace on the east side. Together with Samcheong-dong [삼청동], Gahoe-dong [가회동], Jae-dong [재동], Gye-dong [계동], etc., it is a part of the neighborhood called Bukchon [북촌]. Because of its quaint narrow alleyways and well-preserved traditional Korean houses, Bukchon today is a popular tourist destination.

Due to its central location, Sogyeokdong has been at the forefront of Korea’s turbulent modern history. However, Seo Taiji did not choose to sing about Sogyeokdong simply for the sake of history. He actually grew up in the neighborhood, having attended the nearby Jaedong Elementary School (which is Korea’s oldest elementary school, established in 1895). In an interview, Seo said that he simply wanted to sing about his childhood, but doing so would have been impossible without touching upon the history he had seen. The result, in TK’s estimation, is a more elegant expression of the sinister sense of fear and loss that permeated the experience of Korean children at the time.

Seo Taiji was born in 1972, which means he experienced his Sogyeokdong childhood in the early to mid-1980s. What was going on in Korea in the 1980s?

It is important to remember that, until late 1980s–early 1990s, South Korea was under authoritarian dictatorship. To be sure, the situation was better than North Korea’s—but not by that much. In December 1979, General Chun Doo-hwan rolled tanks into Seoul, threatened the then-president Choi Gyu-ha at gunpoint, and later appointed himself to be the president. When the citizens of Gwangju protested the coup d’etat, Chun sent paratroopers to the city and murdered more than 600 people.

During Chun’s dictatorship, the democratically elected National Assembly was no more than a shill. The true, shadow government was located in Sogyeokdong, under the name of the Defense Security Command. Growing up in the neighborhood, Seo Taiji likely could not help but notice the swirl of chaos surrounding the area.

Accordingly, in the music video for “Sogyeokdong,” one can see a number of historical tropes. The main boy character is wearing a military uniform, which is a standard issue in the 1980s. The dictatorship, in large part, justified its existence by playing up the threat of North Korean invasion. In order to instill constant fear, schoolchildren were required to take “military training” as a subject starting middle school. The boys would learn how to line up, march and handle a mock rifle, while the girls learned how to apply first aid. (Incredibly, “military training” remained as a high school subject until 2007.)

Another scene of the music video shows the air raid drill: periodically, Koreans had to undergo the nighttime air raid drill, during which people were instructed to turn off all lights so that the incoming North Korean bombers could not see the targets below. (Or so the dictatorship told the people.) A modified version of this drill still goes on to this day in Korea, which tends to alarm tourists and foreign journalists into thinking that a war broke out between South and North Korea.

The “Sogyeokdong” music video also makes one direct allusion to a historical event. When the boy and the girl sit together on the stairs, one can faintly hear the radio speaking about 학원 녹화사업, or “School Greening Project.” Like other dictatorial project names, the School Greening Project had little to do with planting trees around schools—instead, the “greening” was a code word for brainwashing.

During the School Greening Project, college students who were involved in the democratization movement were forcibly drafted, i.e. randomly arrested and sent to military bases. There, the students were beaten and tortured until they agreed to serve as the government’s spies within the democratization movement. It is believed that approximately 1,100 students were forcibly drafted during the School Greening Project; six were killed in the process. 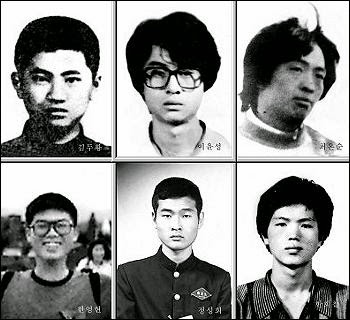 Six college students who were killed during the School Greening Project.
(source)

The music video is not clear on what exactly happened, but it appears clear enough that someone in the girl’s family is being taken away. One can see soldiers rushing to the girl’s house, and there is a struggle. The lyrics of the song also allude to the event, as they repeatedly sing about disappearance, full stream running dry, and being left without even a single photograph.

Got a question or a comment for the Korean? Email away at [email protected]

Thank you for visiting TK! Your blog always has wonderful food for thought. This is no exception. I am chilled.

Thanks, TK! Your concise comments are so much more useful than my attempts to figure out "what happened in Korea in the 80s" from Google. Thanks, especially, for providing the lyrics in Korean and in translation.

This song strangely makes me feel GenX kinship with STJ even though S Korea is so different. There's something about the tone here. It takes me back to being a kid in the US during the Cold War, a few years after my dad made it back from the draft. Twice a month, our neighborhood tested these deafeningly loud air raid sirens, as if that was going to help in a nuclear war. On the playground in the early '80s, the kids would talk about how long we'd survive when "the war with Russia" started. (We lived next to Washington, DC, so we gave ourselves one hour.) Like STJ, when I write about my childhood it becomes a story about politics and history too. I'm glad STJ can write this song and capture the sense of growing up at a particular moment in history. And I'm glad S. Korea has found a measure of stable democracy--I hope we can all keep democracy strong wherever we are.

Im so deaply affected by the song and its meaning im not korean and not even southasian .im actually arab and by looking at how our songs now adays are so shallow im so inlove with how he turned his childhood with every detail ..a great outcome

Thanks! Very informative and interesting post. I would welcome more.

Thank you for this. I just watched Superstar K6 where Kwak Jineon sang a very different version from Seo Tai Ji. Both versions make sense to me now that I have read your insightful analysis.

I haven't read this yet (I will, but I first must post this), and I say YES to more postings by TK on dramabeans! I LOVE askakorean, and I love TK's Facebook feed, and I love when two things I love are together in one place.

Could you please provide an accurate translation for this too? I think Seotaiji's songs worth it.

Well, I watched the video again since I'm hearing to the song ceaselessly these days.

Nobody here seems to talk about the girl being abused by some member of her family. She has bruises in her lips and also in her forearms like trying to defend herself from someone's violent acts.

It's a more sad story that it seemed.

Love the song, adore your time & effort in this write-up.
Thank you! ;)

I would like to thank Drama Beans and TK for putting this together! I just heard the song today on my DVR'd episode of Asia Music Network. I watch a good number of Koream dramas (both contemporaries and historicals) and one of those series took place during this period so I had a vague idea of what was taking place in the video. However, commentators on YT and this write-up were quite helpful in filling in the details for me. As an educator, I like to know more about what I listen to, read and watch.
Thank you again.

However, if you want to save time, the best way would be to book
Delhi Manali tickets online and save the trouble of going anywhere personally.
For booking bus tickets, the process of online booking is very much gainful
especially in a country like India where common people prefer
to travel by buses. With all the snap of the shutter, Punta Cana photography captures a single
moment in time, one that can never occur again in the exact same way.

I would not have expected anything less from someone with his talent.

I come to Korean film, and now to Kpop media, from a fine arts point of view. I first started watching because I am huge fan of the architecture, ceramics, and costumes of the period films. So I am just beginning to learn.
The very idea that a Korean sentence does not require a subject opens realms of possibility, and is a little staggering.. No wonder I cant understand, I have no reference point. I don't want to commit the boorish offence of thinking I know something when I don't.
I see shots that include large numbers of large thrown ceramic water jugs. This may just be stage dressing but I don't think so. It seems like they symbolizes something essential, and necessary (like water). but also something hidden and dark and mysterious. I am completely wrong about this?
I see other water symbolism also: the water wheel always seems to show up when young women are a hub in the story. And lovers standing on bridges always seems to imply intimacy that goes beyond words. Especial when they see themselves together in a reflection that seems to say that they have a psychic connection and joined fates. But as Freud says "Sometime a cigar is simply a cigar".
Please advise,

I started researching this for History. (We're studying the cold war, and I chose the Korean war, I thought this would be a nice addition to my project because this did happen during the Cold War era.) Upon research this doesn't match up with other websites about this Incident. Can you explain?