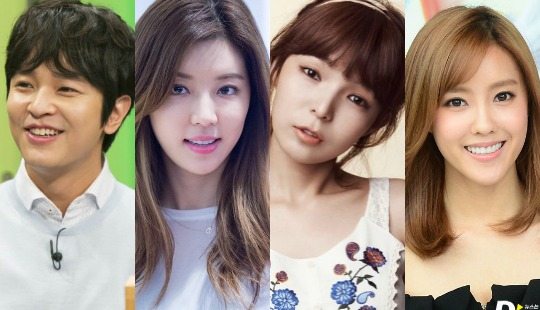 MBC is making a new sitcom, titled Unusual Men and Women, and it’s notable because it’ll be a remake of Korea’s very first youth sitcom, Three Men, Three Women, which explored love and friendship in a boardinghouse where a sundry group of people lived. It was a new, fun format for Korean television at the time, and a great vehicle for young stars, which included comedian Shin Dong-yup (SNL Korea) and actors Song Seung-heon (Saimdang, Light’s Diary) and Woo Hee-jin (Moon Lovers: Scarlet Heart Ryeo), who acted in the 157-episode series that aired from 1996 to 1999.

Now, it’s been confirmed that Kim Jung-hoon (Start Again), Park Han-byul (I Have a Lover), Park Jin-joo (1% of Anything), and T-ara’s Hyo-min (The Thousandth Man) will appear in MBC’s remake series.

In the remake, Kim Jung-hoon will play the handsome son of a wealthy family. On paper, he’s perfect marriage material, but he’s actually never been in a romantic relationship. Park Han-byul will take on the role of a golf instructor at a gym whose Miss Korea-level beauty and easy-going attitude cause peoples’ heads to turn. Jealousy Incarnate’s scene-stealer Park Jin-joo, who also impressed audiences through her variety show appearances on King of Masked Singer and I Live Alone, will play a bright and bubbly character whose presence is said to light up the show. T-ara’s Hyo-min is also set to appear, but character details have not been released at this time.

In order to make a lasting impression, the cast is reportedly customizing their roles to fit their actual personalities. It’s been awhile since I’ve tuned in to a sitcom, but sometimes when dramas are just too much and you want something light and breezy, sitcoms can do just the trick.

Unusual Men and Women will premiere sometime during the first half of 2017 and production will begin next month.

Well, I guess that after "sageuks-fusion-rom-coms-time-traveling-gender-benders-revenge-doctors-mortal-diseases", remakes are really trending now.

I hope if anything, it will start a trend of sitcoms / comedies ala Jealousy Incarnate. It's just exactly what I need after long hours of work.

I am quite surprised they dont cast Kim Seul Gi as she's usually the to-go-girl for comedies.

Anyhow, so happy to see Nurse Oh doing well! I still crack up whenever I think of the scene where she stubbornly pushed her cart to Jung Won.

Yes, sitcom type dramas like JI are sth I like. It makes the perfect combo for a rom com. Humor like that of a sitcom and length of a drama.
I wish JI got more recognition and ratings so that people knew that this was an interesting format but the ratings were just fine at best when a few shows can get 15 plus easily.

I liked JI but I would easily cut off 8 episodes. The young trio didn't delivered anything, and was just a waste of screen time.

And I really love the mothers, but the plot was kind o "meh" for them too in the end. I would totally watch a spin-off of them together.

Ko Gyung-pyo is a good actor, and he shined in "Reply 1988", but he totally disapeared when he was with our OTP, doing constipated faces.

Is this for real?!?! Woah! I can't wait for this!!!! I was watching this way back 2002 in a cable channel. I was 10 years old. Can't believe how early I was exposed to Korean TV and I ain't even Korean lol

Yay for Park Jin-joo! She's been a favorite of mine since Bride of the Century. I keep waiting for her to get out of the "best friend of the female lead" or some other second string character field. She does so good with what little I've seen her have, I would love to see what she can do with a bigger role.

Idk if I'll watch a sitcom but I'm proud of her. Does this mean she'll be missing from my dramas for a bit though?

So glad Hyomin will be back acting especially with this fun cast! I hope this drama is a success! T-ara fighting!

Excited to see these two Park in a sitcom. Park Han Byul is a good actress, while I disliked her role in I Have A Lover but she did great job while playing alongside veterans like Kim Hyun Joo and Ji Jin Hee. Park Jin Joo is always a scene stealer in a every little things I have seen her. I also like her in 1% of Something. Her voice also nice.

My kind of show~ excited

I watched the recent Happy Together with Park Jinjoo and was really surprised to find out that she was the the one who sang the "Onara" tune in the Jewel in the Palace drama! She certainly has good singing voice. All the best to her rising career!

I hope she will get to sing many ost of popular so many more people will love her. She deserves some love too :)

She's not the original singer that sing Jewel in the Palace OST. But she always sing Onara in front of her senior during college to be different. And one of her videos singing it in the past gone viral recently after her appearence in King of Mask Singer.

Hopefully it will be penned by a good writing team. Then that means I'll have a new sitcom to look forward to.

hmm idea of sitcom, might be the next diff thg. But only if it successfully makes u laugh, get the joke.

Interesting! What is the difference between a regular drama and sitcom? Is this like a blend of weekend dramas like Five Kids and a regular drama like Legend of thd Blue Sea?

someone correct me if i'm wrong.

a korean sitcom format is like friends (american show)—it's got the laugh track, length is about 30 minutes per episode, and it airs daily (weekdays). more gags, more comedy, a lot of light comic stuff.

weekend dramas are also technically dramas, also an hour long—they just air saturdays and sundays. but the content tends to be focused on families—large extended families and various connected acquaintances, and their individual stories and conflicts. feel-good stuff.

I think it's more like Potato Star (Yeo Jingu, Go Kyungpyo) or High Kick (Yoon Kyesang, Park Hasun). I am not familiar with korean sitcom but I think they are.

what a coincidence! i've been positively pining for a good sitcom for ages now, and i started watching three guys, three girls on youtube earlier this year. and wished that there was one like it in present day.

the only good sitcoms i've personally watched in my lifetime were soonpoong clinic (legendary), high kick #1, and kimchi cheese smile. i also loved vampire idol, despite it being pretty campy, and was PISSED when they ended it the way they did.

i love that you get to watch the characters grow and develop, and i really liked the warmth of three guys, three girls. shin dong-yup used to be so young! it's a tad cheesy, like most sitcoms are, but i still loved it. still haven't finished it, but a remake of this is really excellent news for me.

i'm not thrilled about this particular cast though. i guess i don't really have anything against kim jung-hoon or park han-byul, but what is t-ara's hyomin doing in there?

Park Jin-joo!!!
The nurse from Jelaousy Incarnate!! I'm looking foward to see her in a main role. :)