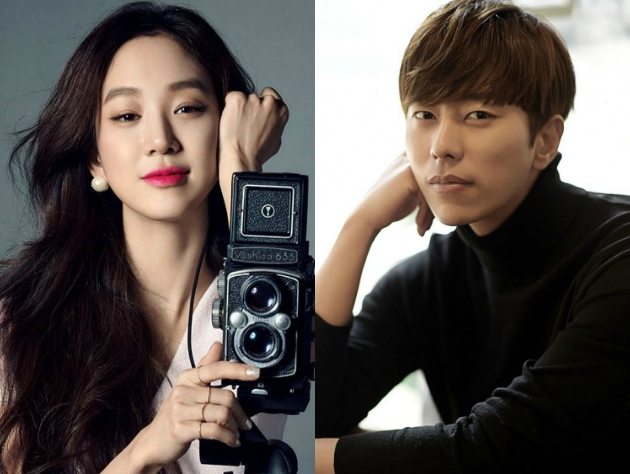 This pairing is unexpected, but one that I like the sound of. Jung Ryeo-won (Bubblegum) and Yoon Hyun-min (Tunnel, Beautiful Mind) are being courted for a new KBS legal drama called Don’t Trust Her. Jung’s favorably considering the starring role of a ferocious ace prosecutor who’s led several daring investigations.

Her character has worked in a number of different Seoul departments, and is known for her knowledge of the law. She’s not the straight-laced, upright type, however, as she has no problems waging personal attacks, tampering with evidence, or convincing witnesses to commit perjury. The lead will precariously toe the line between legality and illegality, and she’ll be faced with even greater moral challenges once she gets appointed to head a team specializing in sexual assault crimes.

In contrast, the role Yoon is up for sounds like the polar opposite. He’s a rookie prosecutor with an idealistic view of the system, but who has the same goal of bringing criminals to justice. There aren’t many details regarding his character yet, but it sounds like he’ll call out his sunbae prosecutor on her questionable tactics, which will lead to tense conflicts and begrudging mutual respect.

I’ve missed Yoon since Tunnel, and Jung sounds like just the person to give her brash character touches of charm and humanity. While I’m admittedly burned out on courtroom dramas lately, I’m anticipating strong performances from both and think this show would be worth watching for their potential chemistry.

Previously known as Witch’s Courtroom, Don’t Trust Her will be written by Jung Do-yoon (The Time I’ve Loved You, Baby-Faced Beauty) and directed by Kim Young-kyun (Mary Stayed Out All Night). It will air on Mondays and Tuesdays and will follow Lingerie Girls’ Generation, which follows School 2017 on KBS.

The writer and PD don't make me excited but seeing a potential JRW and YHM pairing is interesting.

But this pairing seem quite interesting.

I'm happy to see Jung Ryeo-won back in a drama but this PD/writer combo....what to do?

Yes, this PD/writer combo made my excitement lesser for her drama comeback. I hope if she picks this drama, it's actually worthy.

I miss him and would love to see him in a drama again, he was so so good in Tunnel!

But what happened to that half angel-half human drama, Fall? I was looking forward to hearing news about it, I want him to play that character ☹❤

Exactly my question. The angel drama sounds more fresh than this one. I feel like drowning in legal/police drama since the last few months. And the writer-PD duo don't excite me either.

Right? That news got me really excited , the premise sounded different and really good!

You took the question right out of my mouth. :)

I would like to know what happened to that drama.

I just went back to that article, he's confirmed but we don't know what character he is going to play yet because Ahn Woo-yeon is confirmed too!

Same, I thought he already confirmed with Fall from the sky. There's already much number of courtroom drama to air/aired this year. But if it's Yoon Hyun Min, I will never say no.

Yes, he did, I just checked but there is no other news about it! Hoping he doesn't drop out of that one to do this because I don't want to watch another courtroom drama!

So what happened with Yoon's alien /or angel drama before? Anyway I'm excited to see him as a leading guy. Kdramaland still appreciate talent.

Not that excited with the premise, but it could turn out to be good one (although this writer made me worry). I like Jung Ryeo Won in romcom so hopefully this drama will have some comedic parts. Honestly, Witch's Courtroom sounds a better title lol.

Would love to see Yoon Hyun Min lead in a drama. I have fallen in love with his supporting roles!

Jung Ryeo-won ? I haven't seen her since The king of dramas & History of a salaryman , would love to see her again and if it's with Yoon Hyun Min , well that just keep getting better :) !
I can totally see her bossing around Puppy Yoon Hyun Min ㅋㅋㅋ
I don't know the writer neither the PD, so I have no idea what to expect from them ?

Another prosecutor drama? When will these end? :( I want something bubbly and fun and rom-com-y!

Omg I was just thinking about Yoon Hyun Min, he made a lovely/awesome appearance on Because it's the First Time! (Together with Jung Kyung Ho so check it out!). He and my girl JRW as co-leads is amazing news. But oh heavens, that writer has burned me out so badly with ttihly, I'm still not over it damned.

Lol
But wait a minute, what kind of drama is Lingerie Girls’ Generation? Assuming it IS one.

Hooray, love them both! Glad to see he'll finally get his lead part. Dare I hope the show won't massacre legal procedure and court proceedings? ?

The King of Dramas was the last time I saw Jung Ryeo-won so it would be great to see her once again.

Jung ryeo won!!! So happy she's coming back to the small screen! I didn't even notice the male lead when I read the headline, but cutie soo!!! I'm meh on the premise but may just watch for the two of them. Please be good!!!

Though I love this pairing but when I think about it over again, yes. You got me.

This drama doesn't sound as exciting as the other drama Yoon Hyun Min already confirmed. Fall From the Sky is suppose to air late this month on tvN, but I haven't seen any updates. I just tried looking it up on Daum/Naver and still nothing. :(

I'm neutral about Jung Ryeo Won, but the character she would be playing here sounds really unlikable. Tampering with evidence??? Personal attacks on others?

I have been waiting for updates about that drama as well. I hope that it will still air as planned. August is almost over.

I enjoyed Baby-Faced Beauty!! I remember really liking it when I watched it years ago. I habe no qualms with the PD either.

This pairing thoooooo. Omg. I logged on and immediately clutched my pearls reading the title.

I was excited to see Jung Ryeo Won's name back in dramaland headlines again and I like Yoon Hyun Min, too, but my excitement was short-lived after scrolling down to see the writer-PD team. The premise doesn't sound too interesting either. But still happy to see JRW back.

Omg please let Yoon be a righteous dork with glasses a la Oska ajusshi in I Hear Your Voice!

I love this pairing, but again, another legal drama? Give me something different, KBS. ? And what happened to Seo Kang Joon and Gong Seung Yeon's drama, "Are You Human Too?" It keeps on getting pushed back.

I just can't say no.
Only me and my friends that know how happy I am to read such news lol.

What about Seo Kang Joon's drama that was supposed to air after Lingerie Girls?