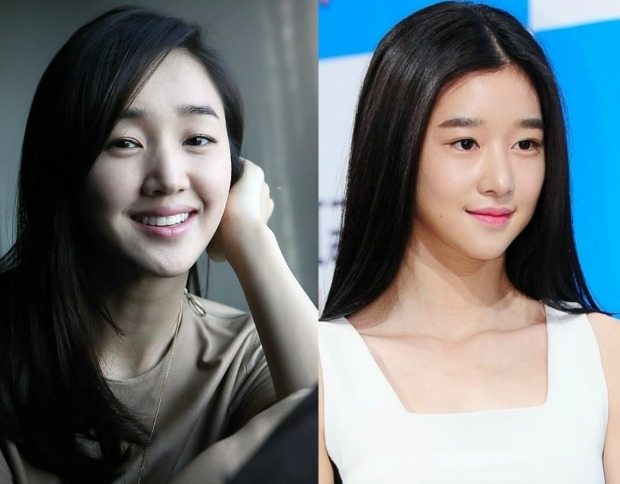 I only needed to read the headlines for this casting story to think immediately, “Yes, it makes total sense, obviously,” because Seo Ye-ji (Rescue Me, Sado) is such a dead ringer for Su Ae (The Man Living in Our House, Take Off 2) that it makes perfect sense to cast them together in a movie. It isn’t just a facial resemblance, but a whole aura and mannerism similarity, as well as similar deep voices and manners of speech, that I find uncanny.

The film in the works is a psychological thriller titled Belief, and the official line is that both actresses have received offers and are considering it positively, but with no decisions yet made. The plot centers around a woman who is locked up in a psychiatric hospital by her family, who then witnesses a murder taking place there. It’ll be a film headlined by two women, still a rarity in Chungmuro (…and elsewhere), so despite Seo Ye-ji’s relative newness in the industry compared to Su Ae, her role will be significant. And while it took me a while to warm up to her (I blame Hwarang and Moorim School), I do find Seo Ye-ji completely compelling in Rescue Me, where I find that her Su Ae-like steely calm works well amidst the suspense and eeriness of the story. So it’s a pairing I’d be interested in watching, especially since I think they both hold their own in the psychological thriller genre.

Belief was selected in the Korea Creative Content Agency’s 2015 Top Creator Audition, and will be director Kim Tae-joon’s feature directorial debut. The production company behind the project is Opus Pictures, which produced The Man From Nowhere and A Frozen Flower and co-produced Snowpiercer.

The project will begin filming later this year, with the aim of a 2018 release.

Su Ae and Seo Ye Ji will be amazing in this movie if they accept !

Yes, please......I know Hwarang and Moorim School weren't worth remembering but that has more to do with quality of script then the actors......please cast her.

I did not see the comparison at first but then I did and omg...blind blown! Really hope they both sign up for this.

This kinda remind me of movie The Last Princess, when Kim So-hyun was casted to play young Son Ye-jin and these two also have quite a resemblance.

Anyway, the premise of this movie sounds intriguing and looks like these two fit nicely with the story. Both of them kinda hit or miss for me, in some roles I do like them while some are not. Maybe thriller suit them the most.

Agree, maybe because I watched her for the first time in some romcom that I had some not so positive impressions on her. But she is slowly growing on me.

I was rooting for Han Ye-ri for best actress last year but Son Ye-jin was Amazing in "The Last Princess" and totally deserve to win. Even my love for Park Hae‑il was overshadowed by Son Ye-jin incredible performance. That girl is the reigning princess of Chungmuro imo.
I hope Kim So-hyun will get another opportunity to work with her. Maybe as mother and daughter.

She was really amazing in The Last Princess.. Agree with you, Park Hae-il was great as usual but Son Ye-jim was incredible.

Kim So-hyun - hopefully her decision to leave Sidus means a bright future ahead. Her reunion with Son Ye-jin will be amazing.

Do you think leaving Sidus was a good move? I thought they did a good job getting her a lot of projects. Maybe that was the problem? Working her non-stop...

"The Fortress" is going to be released this month with Park Hae-il playing the incompetent king Injo. Sounds like the movie version of "Cruel Palace" with the focus on the king and his retainers.
Hope it's going to be good.

I think maybe that's the problem - working non-stop. Jang-hyuk is also working non-stop, not that I'm complaining lol. She seems to be more matured than her age, so maybe she thought it well already. But part of me was thinking it might be better if she renew her contract for another 5 years before she can be independent. Decision to leave the agency is like gambling too, especially a big agency.

I hope The Fortress going to be good as well. Watched the trailer, looks promising.

A lot of older actors would be happy with that kind of problem lol.
She is still young and I hope she takes time to enjoy her youth and college life.
Is she really going solo or did she go with a different agency?

I don't think any of us will ever complain about Jang Hyuk being in too many dramas. I would love to see him in a sageuk (film or drama). He is much older and this might be where he wants to be at his age.

Yes the trailer looks great but it annoys me that there are no major role for women in this sageuk. I don't even see any notable actress with a supporting role either.

It's interesting that "Fortress" is set in the same timeline as Park Hae-il's "War of the Arrows." This looks like it would be heavier on the politics. Hopefully a lot closer to the actual history despite being based on a novel.

@kiara I'm not sure about that. I think what I read is her family is setting up their own agency. Agree, older actors might be crying waiting for good offers to come ? I think Sidus is managing their artists well, of course sometimes drama can turn out bad but I don't think agency has upper hand on that.

Jang Hyuk agreed to do a 50 epi drama ? He might wants to enjoy acting as much as he could before getting much older. Jang Hyuk-Seo Hyun Jin pairing in sageuk will be dream come true.

Wow. Seo Ye Ji owns the drama 'Rescue Me', I know she'll be great in this, too

Yes please! Love her in Rescue me.

Oh my gosh I totally get what you mean, even from the pictures. This movie sounds epic!! ^^

"Sado" was probably the turning point to her acting. She did a lot of training for her role in it even though it was small. I'm glad she got to work with Song Kang-ho <3.
I liked her in Hwarang. She can do proper sageuk and she was consistent throughout that hot mess.
She would've been a great addition to the cast of "Ansi Fortress" with Jung Eun-chae instead of that idol girl who can't emote to save her life.

Well, Kim Ok-bin headlined the "The Villainess" and did pretty well. As long as filmmakers like Lee Chang-dong and Park Chan-wook etc are around, women will have their time to shine in Chungmuro.

With a right role in sageuk, she can be the next Honey Lee. I watched few of her scenes in Hwarang, she did well. She has that charisma on screen.

Hwarang is my first Seo Ye Ji's drama since I don't watch Moorim School and I like her there. I wonder why people don't like her in Hwarang because I was totally rooting for her instead of the female lead. And when she was offered to do Save Me, I was excited to see her and she totally nailed Sang Mi's character in that drama. So yes, she's a good actress and I want her to be successful.

I think the dislikes was more to do with her character. She played General Isabu's strong willed and sword wielding daughter. She had more freedom and power so she came off as being demanding and unlikable to some.
She was no delicate proper princess we are used to seeing from Joseon era sageuks.

Same I liked her so much better than Go Ara's character....the lead female character honestly ruined the drama for me ?

Ahhh, I knew I wasn't the only one who saw the resemblance! In the way they carry themselves, and their way of speaking, especially, Seo Ye-ji has always been to me like a younger Su Ae, which I love because that kind of quiet, dignified speech is my ultimate catnip when it comes to types of female voices. A win every time ??? Crossing my fingers and praying hard that they both take the offer...

Hwarang was just a total mess but Seo Ye-ji caught my attention. Her character was interesting but not really well-written (like the story) but she had that regal aura that fitted the role perfectly. I'm truly glad that Save Me is helping her career and with this intriguing movie, I hope she further improves.

I always thought Seo Ye-ji looked a lot like Jung Ryeo-won–the facial resemblance, the signature long hair, and yes, even their speaking voices are quite similar, too. But I see a little Su Ae in her, too. I'm sure both Su Ae and Seo Ye-ji are more than capable of tackling this genre, so can't wait to see these two ladies collab!

Seo Ye Ji is so good in Rescue Me.

I first saw her in Diary of a Night Watchman. (Another one of my "I can't wait for it--AUGH! It's ruined! Dramas.) She was good in that.

I feel bad for never seeing Seo Ye-ji in anything because I LOVE Su Ae!

This is funny because I was literally watcing Save Me the other day and I remember thinking how much SYJ reminded me of Su Ae.

Yes i like Seo Ye Ji. Enjoyed watching her in Moorim school with Lee Hyun Woo. But unfortunately script was so bad and Hwarang too.

I've haven't seen all of the shows Seo Ye-ji has been in, only a couple of clips, but I've seen enough to agree that she does share characteristics with Su Ae. It does sound like they would be a good pair in this particular film.

Yes! I Song Ye Ji's voice reminded me of Sue Ae very much. I love them and their voices, both.