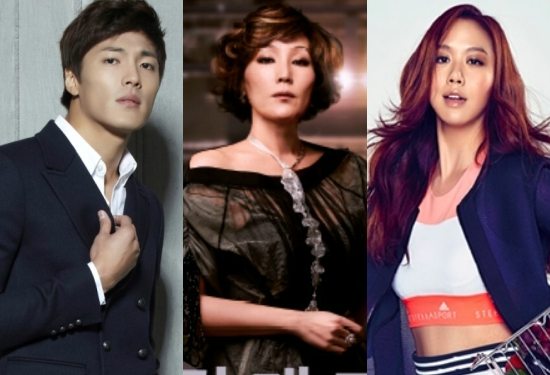 Oh yay, I’ve been eagerly waiting for more updates to this show for forever. Casting additions have been made to the remake of acclaimed Japanese drama Mother, to join Lee Bo-young (Whisper) as a teacher who kidnaps a student in the hopes of giving the young girl a better life. Lee Jae-yoon (Revolutionary Love), Lee Hye-young (Can You Hear My Heart), and Go Sung-hee (While You Were Sleeping) are reported to have joined the tvN show, which is aiming for an early 2018 release.

I expect that much of the show will revolve around Lee Bo-young and the young girl she kidnaps when the teacher notices that one of her charges is being abused at home, but it’ll be interesting to see how other characters intersect with this surrogate mother-daughter pair as they go on the run. Lee Hye-young will be returning to the small screen for the first time in six years, and will play a former actress with a pretty heavy backstory: Just as she was feeling the limits of being an actress in her early thirties, her husband cheated on her with a younger woman and took out a massive loan in her name, leaving her penniless and abandoned. She retires to the countryside and volunteers at a nearby nursery school, where she meets Lee Bo-young’s character.

Character descriptions for Lee Jae-yoon and Go Sung-hee haven’t been released yet, but I look forward to learning more about their roles, and whether they’ll aid Lee Bo-young or stymie her efforts to take her “daughter” away from an abusive environment. I also hope we hear of who gets cast as the young, abused girl soon, because I suspect it’s her relationship with Lee Bo-young that’ll have most of the emotional impact on the show. It’s been reported that producers have decided to hold open auditions for the role, so I have high hopes that whoever gets cast will have a touching rapport with Lee Bo-young.

Mother is scheduled to follow Buam-dong Revenge Club and Smart Prison Living in tvN’s Wednesday-Thursday slot, which puts its premiere in early 2018.

Okay this story sounds like it's right up my alley. Cautiously getting my hopes up 🙌🏾

I love the premise of Mother though I haven't tried watching the Japanese version as I know it will be a sob fest. But since I've been missing Lee Bo-young, I can't miss this!

lol tipsymocha are you having a long day? Post reads a little... half-hearted haha hwaiting!

I know they have auditions, and may the best actress win.

Mother Jdrama is one of my fav.drama because I love the tone and the beautiful scenes. I'm so curious now about the little kid casting because in Jdrama version, it rose that kid to fame for her impressive acting and even won her the awards.

Mana Ashida was outstanding. At 6 years of age she had more acting chops than most adult actors/actresses.

She's the epitome of the death glare :P

Now they only need to cast a good kid actress. Because the little girl will definitely have emotionally heavy scenes to do and this show banks on that mother/daughter bond, so it would nice to have that connection through good acting.

the story is fresh . sounds promising.

I don't remember a character like Lee Hye Young's in the original, but I guess since this version will be longer than the J-ver it's inevitable to have some extra plotline. Honestly I thought Mother was already borderline overwrought what with people who are related to each other coincidentally have problem with motherhood in some form or another, but I give it a pass since it's THE unifying theme that every element of the show thrives to realize and the show deals with each problem genuinely and seriously.

being an actress in her early thirties, her husband cheated on her with a younger woman and took out a massive loan in her name, leaving her penniless and abandoned.

Sakamoto Yuji is one of my favorite screenwriters and that's why I pay attention to each news of this adaptation. He's a master of human drama because his scripts always feel genuine and never come off as a vehicle of his opinion on human nature/society/relationships even when they're the subject of his dramas. This is something most writers lack tbh.

The Japanese drama Mother is the most heartbreaking drama I've ever watched. The ending was so right and so cruel. I've been wanting to rewatch it for years but I've been afraid that my heart wouldn't survive.

I agree that Shin RinAh might be a strong option for the child.

I'm a little concerned about the suggestion of side stories cluttering up the drama because part of the point was how isolated, alone, alienated, and disconnected Nao was. At time her bonding with Tsugumi was . . . almost a theory the audience had to supply on their own because although the character is feelingful she was inexpressive..

Hopefully poor abandoned actress is a stand-in for the Nao character's bio-mom.

I check out the news because this "Mother" remember me of something! I remember reading on twitter the presentation of this japanese drama, I found the plot interesting but I was waiting for a korean version! Here we go!!

In an earlier drama, didn't Lee Bo-young play a mom who's child was kidnapped? This time she's the kidnapper?? Lol. Dramaland loves her so much, she gets to play both sides of the coin!