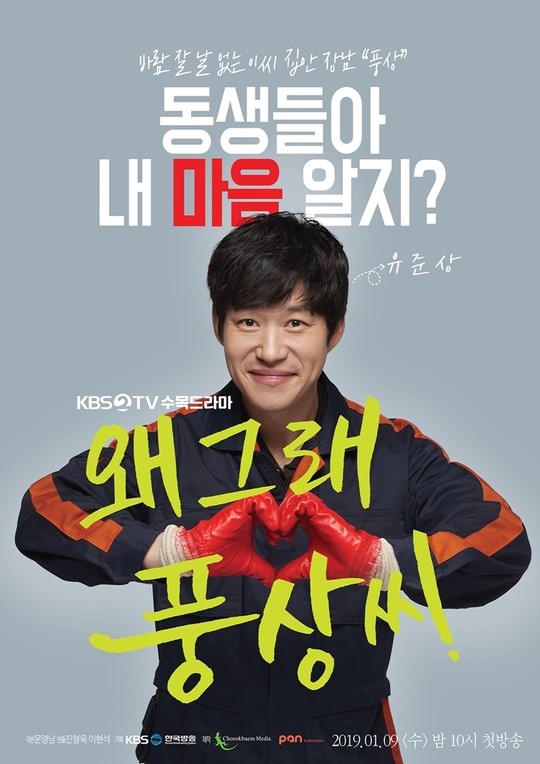 With just a few more days until the premiere of KBS drama What’s Wrong Mr. Poong-sang, character posters have been released featuring its main family.

Yoo Joon-sang (Falsify) plays the eldest sibling, Poong-sang, who’s spent his whole life lovingly taking care of his siblings. Literally, his name means wind and frost, which reflects the thankless job he’s had thus far. Despite his brothers and sisters now being adults, they have yet to understand what he’s done for them. However, as we follow Poong-sang’s stressful life, filled with all sorts of mishaps caused by the four siblings, the crux of the drama will be about the meaning of family.

In Poong-sang’s poster, he is shown dressed in his work coveralls as he shapes his hands into a heart towards his siblings. The caption addresses his brothers and sisters as he says, “You know my heart, right?”

The character posters of his siblings feature each of their responses and visually show how they treat his heart and feelings. 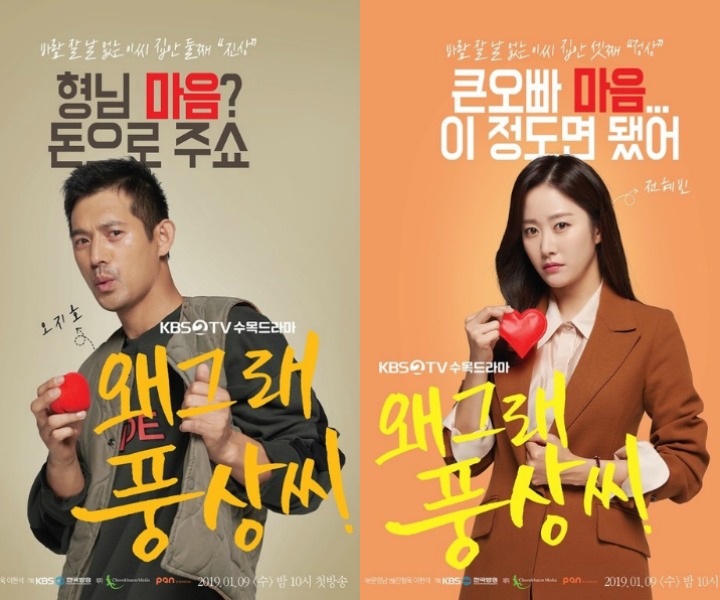 Oh Ji-ho (Should We Kiss First) plays the second eldest sibling, Jin-sang, whose life’s motto is “You only live once.” In his poster, he is shown holding a little heart toy upside down as he carelessly whistles. He responds to his brother by saying, “Hyung-nim’s heart? Give it to me in cash.”

The third and middle child is Jeong-sang, who is played by Jeon Hye-bin (Life on Mars). She holds a shiny heart stiffly in her poster as she cynically says, “Oppa’s heart… If this is it, I’ll pass.” 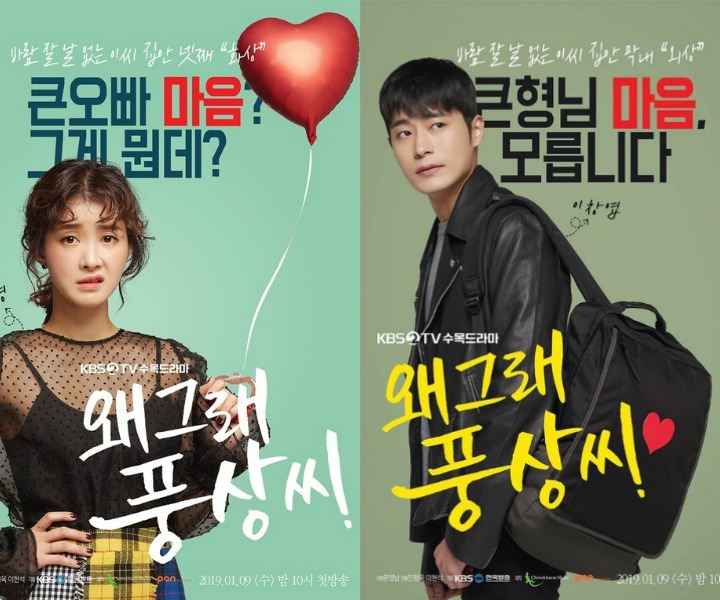 Lee Shi-young (Risky Romance) plays the fourth sibling, Hwa-sang. She holds a heart-shaped balloon with a perplexed look and, similar to her sister, rejects her eldest brother as well: “Oppa’s heart? What’s that?”

The last and youngest of the siblings, Wae-sang, is played by Lee Chang-yeop (Rich Son). He stands with his back partially turned, showing his black backpack which features a lone heart stamped on it. His response is also dismissive as he says, “Hyung-nim’s heart? I don’t really know.”

I don’t watch a lot of family dramas, but I might be tempted to give this one a watch. The cast does look promising and a warm family drama is always a great way to chase away the winter blues.

What’s Wrong Mr. Poong-sang will be starting this week on January 9, 2019, broadcasting Wednesdays and Thursdays on KBS.

They're his siblings? :O That's quite a cast...

Right? If this were a different drama, this group could easily make a nice love polygon lol

Lol I thought they were going to play couples before I read an update they are going to be siblings.

I want to try watching a family drama, and with this cast it really seems promising.

I really want him to just stop taking care of them by the end of episode 1 and let the cards fall where they may for the rest of the series.

Why did l get mad just looking at the posters 😅

You just KNOW the poor chap is gonna suffer.

I never thought I wanted to watch this show, but I would like to. 😊😅😊

Oh so it is not a weekend drama. Hasn't it been long when a family drama was in the weekday slots. Does that scream that it should be tried?

The only family drama-ish show that was on a weekday slot and that I watched and liked was "Unkind Ladies". It starred veteran actresses Chae Shi-ra, Kim Hye-ja, Jang Mi-hee and Do Ji-won. It's about Chae Shi-ra trying to get her GED and punish the teacher who got her expelled from high school and her mom, played by Kim Hye-ja, who has to deal with the appearance of her late husband's friend, Jang Mi-hee, who is also mistaken as his "other woman". And the two women who started on the wrong feet have a womance lol

Looking forward to this drama. Hopefully the siblings won't annoy me too much.

this sounds interesting. i hope it will be wonderful and i can fit it into my rapidly filling up to watch list! i need another warm family one

I'm gonna go mad if Poong-sang gets diagnosed with a terminal illness early on, and madder if his siblings continue their ways even if they know.

Even though this will be on Wednesdays and Thursdays, something about this show says "weekend drama" to me. I don't know if that's good or bad at this point.

Hmm maybe it's the writer who wrote a lot of weekend dramas.

Everyone looks quite put together and fancy... but look at that poor chap's red rubber gloves.. he's probably manual labor worker or like a truck driver... and will just smile when his siblings give him sh and complain away ..

Will it air on kbs world? If yes I will definitely check it out.