Kim Nam-gil, Kim Sung-kyun paired up in new stills for The Fiery Priest 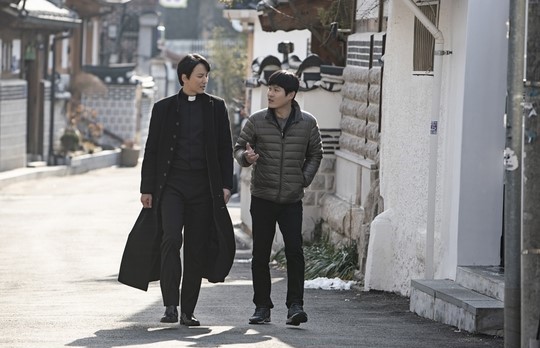 The story is about a hot-tempered Catholic priest and a bumbling police detective who meet amidst a murder investigation. The two unwittingly start trying to solve the case together, but the partnership is not an easy one due to their differing personalities. What results is plenty of squabbling and comedic goodness as the pair navigate the clues all the while learning how to work with one another.

Kim Nam-gil plays Kim Hae-il, the hot-tempered Catholic priest with a rough personality and a colorful manner of speech to match. He’s described as being more detective-like than a real detective which perhaps comes from his background. Although he is presently a priest, he was once an agent for the National Intelligent Service in his past.

Kim Sung-kyun plays his counterpart, the bumbling police detective named Gu Dae-young. His character is stationed in the violent crimes division. Yet, he’s somehow more merciful than a real priest, seemingly scared of his own shadow, and his competency is bumbling at best.

In the released stills, we get a peek at their odd-couple bromance. The two are shown walking along a road and eating a meal together. However, the grimacing and bickering seem to continue wherever they go.

Writing for The Fiery Priest will be done by Park Jae-beom who is familiar with the genre. He wrote the first four seasons of God’s Quiz and more recently worked on Chief Kim. Directing will be done by PD Lee Myung-woo whose recent credits include Punch and Whisper.

I’m actually pretty excited! Kim Sung-kyun is one of my favorite character actors and I’m glad to see him continue to play more prominent and leading roles. He is scary good at playing villains, but I always like him best in comedy. Just one more week to go!

The Fiery Priest is set to premiere next week on February 15 and will be airing Fridays and Saturdays on SBS. 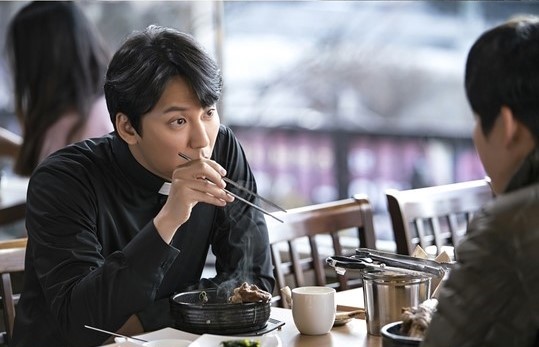 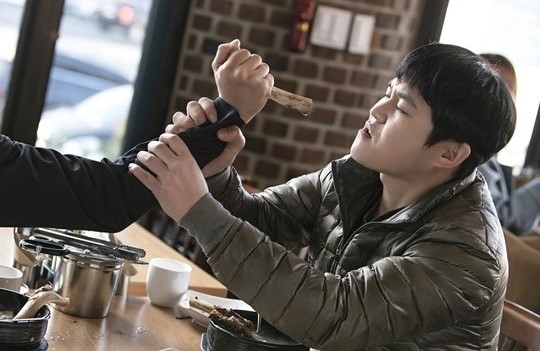 I get somewhat El Mariachi vibe. he needs a guitar case for The Walk

Ooh. I can see that.

I'm so intrigued by this show.

how do you go from nis agent to priest?

but anyway, i'm super excited about this, especially their character descriptions 😂

kim nam gil save me from boredom! this sounds great and i am sure he will deliver!

Oh!! Kim Nam-gil's character used to be an NIS agent!

Now that's quite a career change. I hope we get to find out what prompted the career switch.

7 Eries be the Light

LOL, what the heck are they doing with that bone! I need to watch this ASAP.