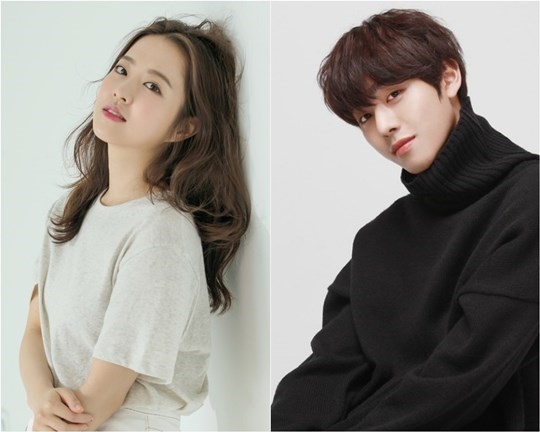 The story is about a man and a woman who suddenly meet their death and are given another chance at life through soul-reviving beads in a magical abyss. By using the magic, their souls are reborn on earth, but they find themselves in completely different physical bodies.

Park Bo-young will be taking the role of Go Se-yeon. Before her death, she had an accomplished career working in the Seoul District Public Office as a prosecutor on the special investigations team. Her beauty was unrivaled in all of Korea and she was called the Wonder Woman of the legal sphere. However, everything changes when an unexpected accident results in her death. She is resurrected through the mystery of the abyss, but her face is no longer the beauty that it once was and she finds herself working as a lawyer at a private law firm.

Ahn Hyo-seop’s character is named Cha Min. In his prior life, he was heir to the number one cosmetics company in South Korea. Highly intelligent, he was always at the top of his class all throughout school. He wasn’t just smart and wealthy, he was kind and humble too — aware of his privileged station in life, he always tried to help those who were less fortunate. However, his one insecurity was his physical appearance. After his sudden death, Cha is given the opportunity to return to the mortal world and he accepts. He then resurrects as an office manager at a law firm, but is also gifted with flower-boy good looks.

Writing for Abyss will be done by Moon Soo-yeon and directing will be done by PD Yoo Je-won. PD Yoo will be reuniting with Park Bo-young on this new drama as he worked with her previously on Oh My Ghostess almost four years ago.

I’m excited to see Park Bo-young back in another drama! She’s always so great at making her characters lovable and relatable, even when not realistic, and her acting is top-notch. I was hoping for a different actor to be cast because I think Ahn Hyo-seop is still a bit green. However, he has steadily been building experience and I still found him to be likable in everything I’ve seen him in thus far. Here’s hoping this is a good one!

tvN’s Abyss is currently being planned to air in the first half of 2019.

Love the casting. And the premise sounds fun! ^^

BongBong and Channie! The question is: can I handle this pro-level cuteness without squeeing into oblivion?

i too have this concern

Whew, I am so ready for this. Cuteness overload coming our way soon!

Bo young is a darling :D wonder witch tone this drama gonna have. Can imagine melodrama but also comedy sprinkled around with their "new" body consider this PD.

So err Park Bo Young is the 'not pretty' version...
Exactly who is supposed to be EVEN MORE pretty than she is and how exactly are they going to make her 'average' if not 'ugly'. Basically they're gonna find an actress that fits more the 'glamorous' bill than she, probably someone taller.
Given how Koreans hate to put actresses in a bad light... I'm expecting the 'average' is going to become 'super duper cute'.

Well I like both actors so I don't really care... But I'm not holding my breath for them to 'ugly' her a la 'She was pretty'.

Also think that Ahn Hyo-seop is too green for this but hey, he's right to ride the popularity wave while it's still hot.

Hoping to be surprised, but I'm waiting the see the drama before having any expectations. The premise is fun... but I don't think the actors are the right choices given the description.

Maybe they'll just mess with the hair/makeup/fashion instead of swapping the cast around (?)

Maybe the average/ugly will just be the actors without makeup :)

Well I guess they'll have to have Jo BoAh cameo as the before death version and then just give PBY a bad haircut for the "average" version.

Super excited! Although just like @tccolb, me too was hoping for a more seasoned actors..

Was just wondering if PBY is so expensive that they will almost tandem her with the greener one.

But hey, gotta stop myself from complaining! Ahn Hyeo Seop is plenty cute and although I have never seen him in anything, I trust the director! (Oh My Ghostess was one of myto fav!)

If that's what is happening then I'm not surprised. One can hardly go wrong by casting bo young (my bias talking).
I was wondering why ahn hyo seop could turn down clean with passion but now I totally get it. Go for it boy

Probably but he's a very good actor and I'm happy to see him get this lead part. He was so excellent with this physical comedy in 30 but 17 it really impressed me.

Ooooohhh I'm excited for this one!

So excited for this pairing! Interested to see how Ahn Hyo-Seop follows up his very popular Chan with this role. It seems much more mature, so it will be a challenge for him, I’m thinking.

Their height difference of 32 cm will be super cute!

Hyo-seop's first large leading role! I'll be rooting for him all the way.

I want to worry about Ahn hyo seop too but I'm confident seeing bo young signing up for this. It's like I've never seen her in a bad production, so I'm gonna trust her again and latch myself to this train... Fighting 💪

I'm supposed to believe that PBY is not attractive? Yeah...lol...ok.

I think this will be good. About beauty, as it is 'in the eye of the beholder', I think their beauty will be more about how they see themselves. And what fashion accessories they have. Because. ppl.
*pfffft*

MORE of Park Bo-young! I've just watched her last movie, a romcom with KYK, and it was so cute with a lot of heart just like this young lady.

Hum... nothing is really attracting me. I like PBY but she always the cute girl, I want to see her in somethind different. I was not a big fan of Strong Girl Bong Soon neither. Ahn Hyo Seop was really cute in 30 but 17 but pretty bland as a lead in Top Management. So I'm not sure about him. Stories like this are pretty fun at the start but tend to lost their touch at the end.

I'll watch anything with Park Bo-Young, so I'm hard in. I've only seen Ahn Hyo-Seop in 30 but 17 and Father is Strange (though that was a pretty minor role) and he's...fine. I'm hoping for a pleasant surprise on his part.

I'll watch Park Bo-young in anything but that's about all that's attracting me to this. The character descriptions are funny though - they're the most beautiful, smartest, bestest in Korea!

I thought Ahn Hyo-seop was delightful in 30 But 17 but haven't seen the evidence he can carry a lead yet. But I'm willing to give the whole thing a shot.

I hope this is better than Strong Woman...

I like them both and it'll be cute and cuddly. But I'm really sick of all these noona (older woman and younger man) pairings in so many of these kdramas.

I'm already visualizing a cute, loveable pair with these two!

Gotta admit I'm a bit wary of the casting, but I expect cuteness overload. And that's not a bad thing.

They've both got a warm vibe. I hope they go for a more warm than slapstick feel.

I’m cautiously anticipating this. I worry that AHS is too green for a leading role yet. Hopefully it’s good!

THE HEIGHT DIFFERENCE. I will die.

Anyone seen this writer's past works?