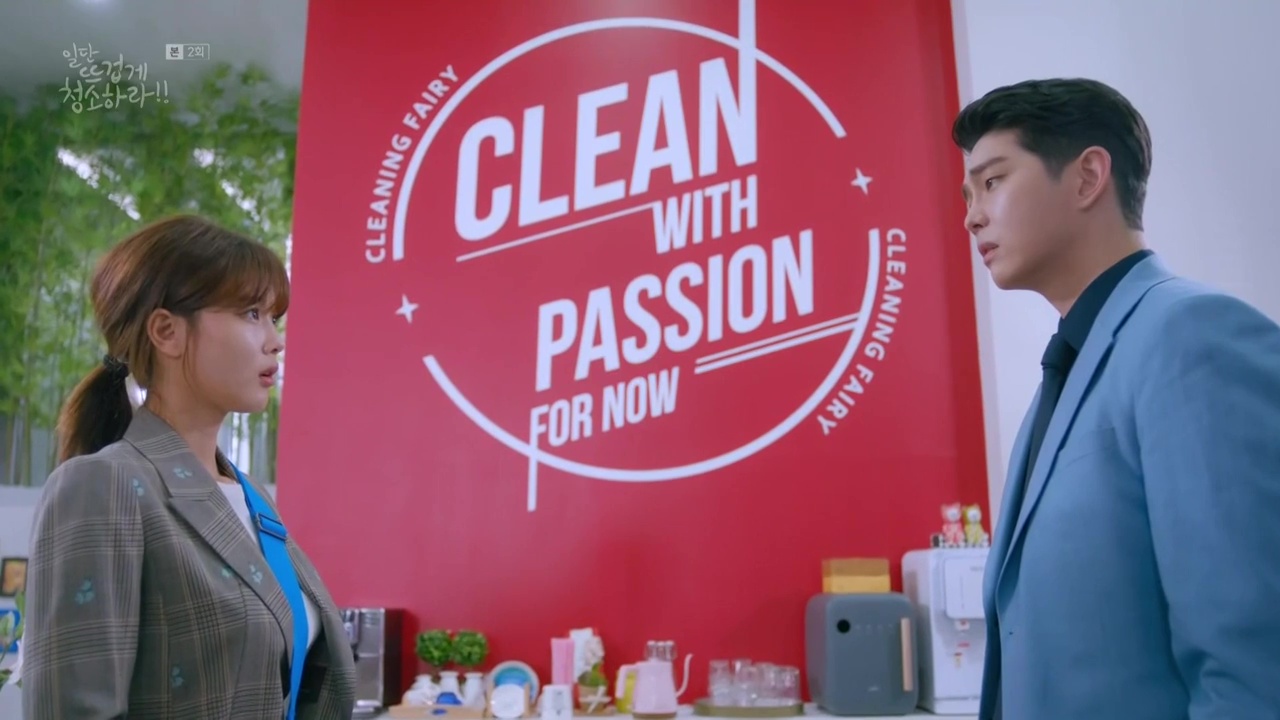 The concept of “opposites attract” might be a proven scientific phenomenon, but it often seems like an unwritten law of Korean dramas as well. K-dramas are famous for their romances — and even more famous for commonly featuring two very dissimilar characters falling in love.

From the chaebol/Candy dichotomy, to the loudest personality clashes you can imagine, these kinds of stories feature people that seem to have nothing in common drawn to each other by an invisible force, and often (at first) against their will. Sure, it’s a sexy concept for a story about falling in love, but how realistic is it? Do opposites really attract?

Research says usually not. In fact, it’s more common for like to attract like. In other words, we are attracted to someone when we recognize a piece of ourselves in them. It’s a universal human need to be understood by another person; it makes sense for us to be drawn to a partner that is more likely to understand us than one that looks at us like an alien. Or, you know, the way Lee Dong-wook’s character did Yoo Inna in Reach of Sincerity. If ever there was personality clash put into a facial expression, this was it. 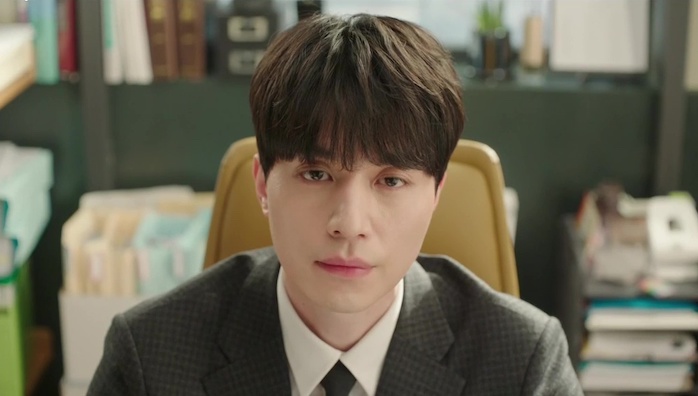 Often, the concepts and terminologies around magnetism are used metaphorically to talk about human attraction and love. Not only can personalities be considered “magnetic,” but we can be inexplicably “drawn to” someone, much like little magnets that were busy minding our own business. Even the term “polar opposites,” often used to describe two people that couldn’t be more different, mimics the idea of dipoles (i.e., north and south) and magnetic fields.

While this is an incredibly simplified English major’s version of electromagnetism, the point is that the attractive and repulsive forces between objects that are seen in the natural world have become an apropos way to explain and talk about romantic attraction. 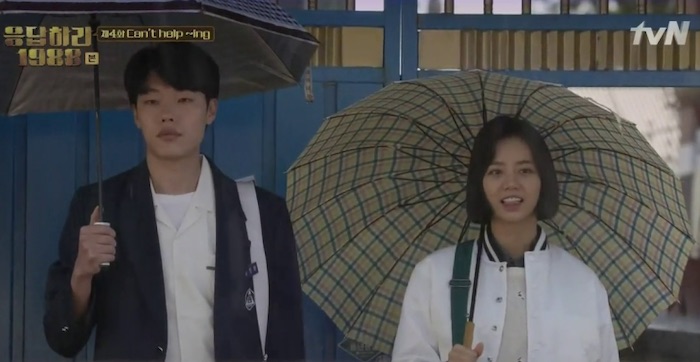 While I’m sure there is some truth in the concept of repulsion being masked attraction, K-dramas rarely dig that deep into the psychology of attraction. Instead, opposites tend to attract in dramaland just because it’s entertaining. After all, watching Hyun Bin spar with Ha Ji-won in Secret Garden, or Lee Min-ho and Gu Hye-sun in Boys Over Flowers, or even the clash between Park Shin-hye and Yoon Shi-yoon in Flower Boy Next Door — all this makes for some good storytelling.

While some dramas play on the opposites attract law more than others, this dynamic is an undeniable component of most romantic pairings in dramaland. It can be the more dramatic comparison of a couple like the grumpy and taciturn character played by Ryu Joon-yeol in Answer Me 1988 with the loud and emotional character played by Hyeri. Or, it can something more hyperbolic, like the clashing lead couple in Clean With Passion For Now, which featured a slob (Kim Yoo-jung) and a germaphobe (Yoon Kyun-sang) of comic proportions. 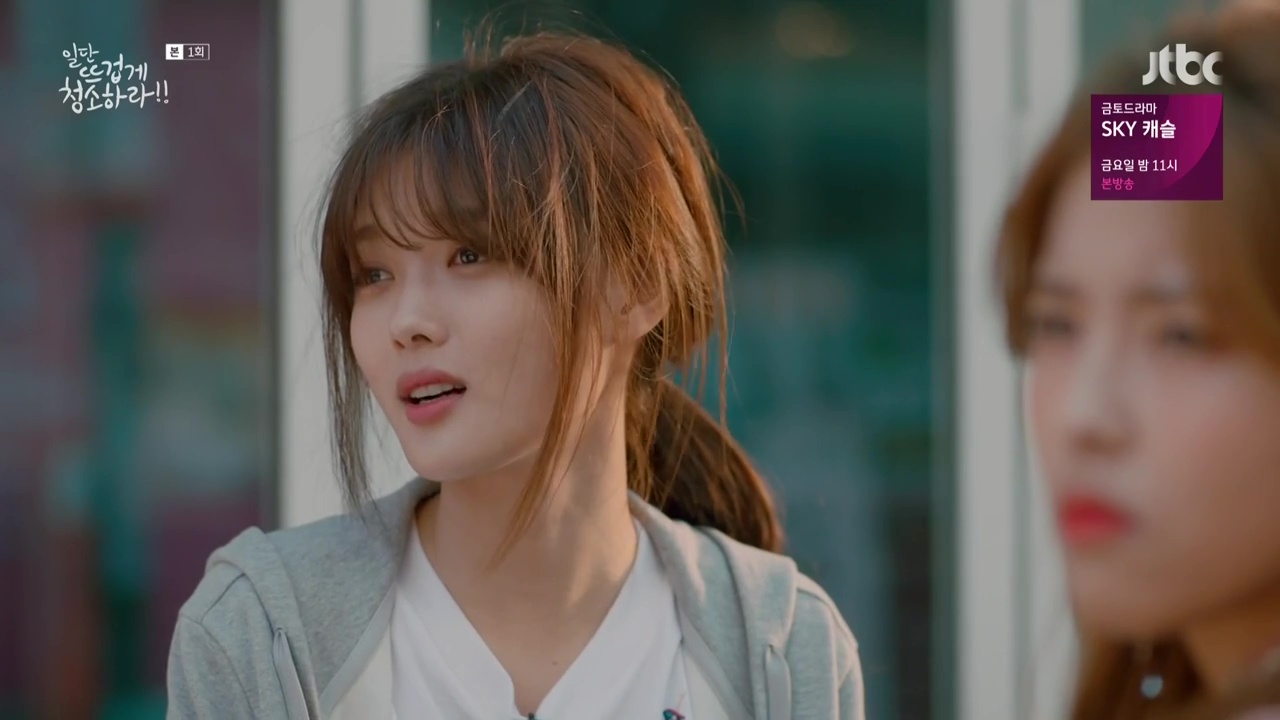 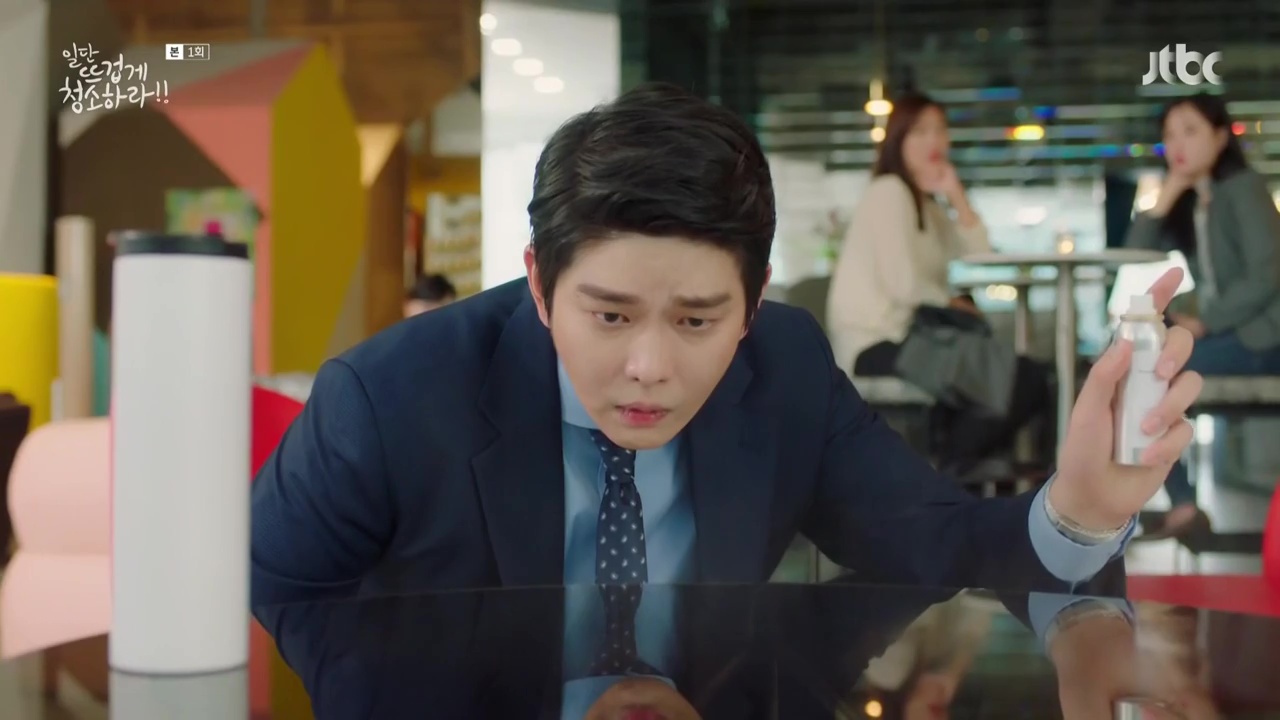 Regardless of whether it’s the couple’s personality types, social standing, inner fears, or even their looks (as in the rom-com She Was Pretty), couples in dramaland often appear to have less in common than any other two people on the planet.

Opposites clashing and then falling in love might make for a good story, but it can also get a little worn, or start to feel a gimmicky. Sometimes, stories that feature like-minded people falling in love are often more interesting. Rather than focus the love story on the personality clash, stories about like-minded lovers are free to explore other angles of the story. 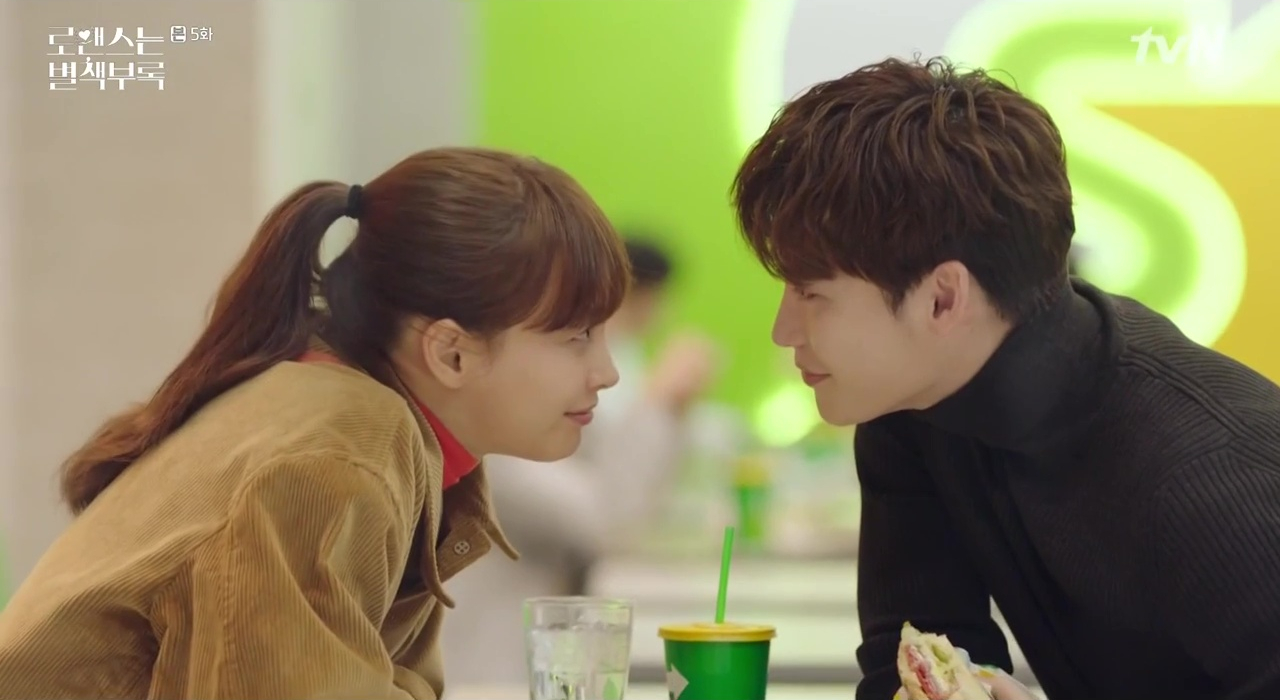 The recently wrapped drama Romance Is a Bonus Book is doing a nice job with this kind of a story — I’m enjoying it for a lot of reasons, but one is definitely the bond between the lead characters, played by Lee Jong-seok and Lee Na-young. They understand each other not only because of their long history, but because they are incredibly like-minded.

In Homer’s The Odyssey, this bond between two people with similar ways of thinking and seeing the world was referred to as homophrosyne, literally meaning “like-mindedness.” Some disagree (scholars…), but homophrosyne can be seen as an essential element in familial or marital bond. Romance Is a Bonus Book’s main characters are the perfect example of a couple that shares this, and it seems like the polar opposite (pun intended) to the opposites attract storyline.

Another drama heavy on the concept of homophrosyne was 2016’s On the Way to the Airport. In the drama, Kim Haneul plays a flight attendant in a stifling marriage who meets the character played by Lee Sang-yoon, when he loses his daughter. The immediate understanding between them, before they even got to know each other, is the perfect way to describe like-mindedness. There was a recognition and familiarity between them that some would use the word “soulmate” to describe — another apt way to think about homophrosyne. 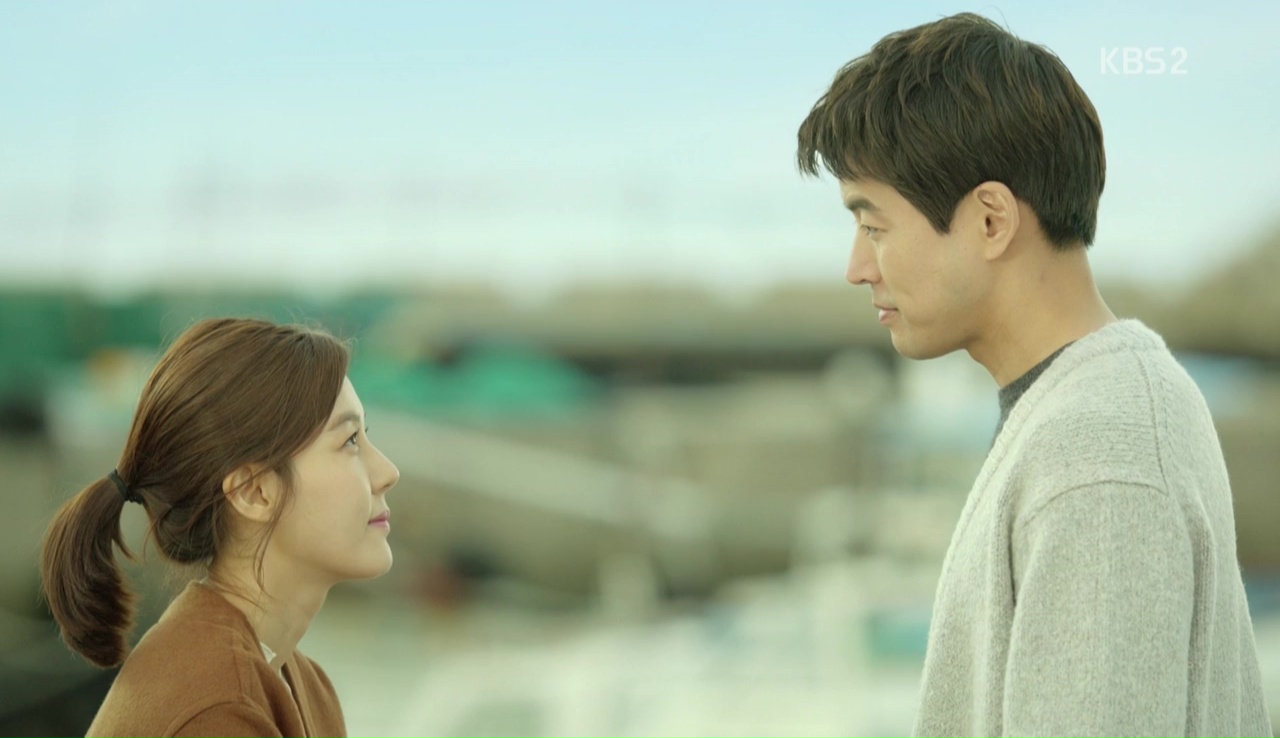 Are these stories of like-minded people falling in love really that different from the opposites attract cliche? When you think about, like-mindedness is actually central to every K-drama romance. Even in stories where opposites attract, that like-mindedness still exists — it’s just hidden behind a veil of bickering and dislike. It’s not until the two characters are drawn together and the veil is slowly lifted that they realize their opposite natures actually fit together perfectly. Their journey to understanding how alike they really are (and how well they complement each other) becomes the meat of the story.

It’s a decent argument, actually. It suggests that we are all more alike than we might realize at first, and that behind every jerk boss or loud neighbor there could be a soulmate in disguise. Love might be depicted as a surprise, like the mystical snapping together of magnets, but the message is actually more realistic than that. Dramaland is a special place because it tells stories that remind us again and again that you never know what might unfold between the characters in a story — or the people that surround you in real life. 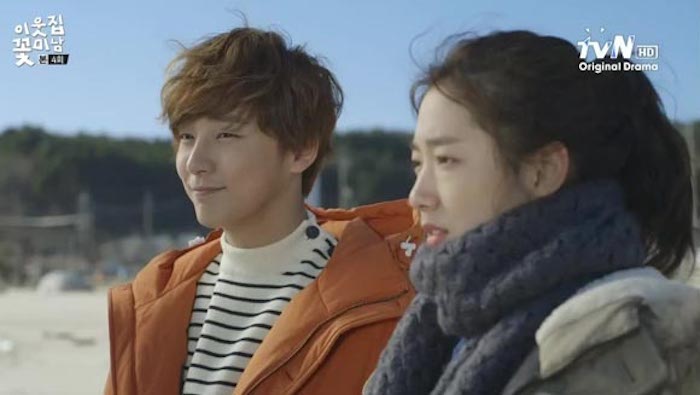 Tags: Answer Me 1988, Clean With Passion for Now, On the Way to the Airport, Reach of Sincerity, Romance Is a Bonus Book, Secret Garden, She Was Pretty

I honestly need a minute to be able to breath again after you said the paragraph with Lee Dong Wook's face. It was just too hilarious.

i'm all for the homophrosyne theory! it's just a wonderful feeling when you find someone with whom you have a deep connection with, and words are not needed to express how you're feeling. cos they'd just... know. so shows like RIABB and OTWTTA resonated really well with me. of course, there are times when opposites attract me too - Reach of Sincerity being one of those times! Jung-rok and Yoon-seo are really sweet together, despite how noob they can be haha. but i think it's in those pure moments that the deepest of connections are made.

"While I’m sure there is some truth in the concept of repulsion being masked attraction, K-dramas rarely dig that deep into the psychology of attraction. "
Aaaand now I want them to.

I think there often is the both "opposite" and "similar" types in a drama, but sometimes he/she is the main lead and other times the second lead.

As much as I enjoy the typical "opposites attract" theory, but I can't help but think that they can be as forgettable as they are enjoyable.
But stories like OTWTTA and RIABB stay with us for a long time.. they feel more relatable and memorable?

K-dramas don't so much deal in 'opposites' as the male lead simply being an insufferable (insert epithet here). There's the issue of women (or men) with a stern withholding parent being attracted to a stern withholding mate, because 'behavior patterns'. How many women in K-dramas have borderline abusive patriarch daddies ordering them about in their 30s? That's got to skew your ideas of what 'love' looks like. Sometimes they're explicit about this - 'Men are like that so roll with the metaphorical (or actual) punches'. SKY Castle was all about children being warped by their dysfunctional parents.

1. Opposites attract trope makes an interesting watch, though I'm more on favor of the like-mindedness theme because that feels more realistic, even people make friends irl with whom they share common interests; the instances of people with polar opposite personalities but having similar povs under *the veil* is a little less.

Hahaha! I was thinking of dramas like She Was Pretty, Secretary Kim, Goho/Gogh's Starry Night, and countless others where the boss seems like a, well, jerk, but then turned out to be a pretty cool dude.

Oh :O
Well the examples are better than what I had in mind (clean with passion boss) or jerk chaebols in general (bof). Now I understand 😅

With some of these 'opposites attract' theme, I am often left wondering what the heck are they going to talk about for the rest of their lives? Especially, when it involves one brilliant and one not so brilliant person.
I couldn't finish Reach of Sincerity for this reason. I don't really need 'plausible' in my Kdramas (I mean, that is the fun of them, right?), but I just couldn't see the connection between these two. At least the personalities need to be entertaining enough.

I did learn a new word, homophrosyne. Yes, soulmates. That’s what DowooXSoah are. <3

Even in stories where opposites attract, that like-mindedness still exists — it’s just hidden behind a veil of bickering and dislike.

This! Sure, irl couples might never have made it through their relationship if they are the polar opposites of each another and misunderstand each another all the time (sigh). But in dramaland, they get stuck together until they discover that really they are actually compatible.

In CWPFN (Clean With Passion) instead of finding a like-mindedness or a common ground, they met at a middle ground.

Whilst they are extreme opposite -- one is a clean freak, established business man and the other one is close to filthy, grab-any-job lady. He went through therapy and she found enjoyment in cleaning. I love that the compromise is not one-sided, both changed and they met in the middle.

Now that you mention it, I've never crushed on a guy I didn't get along with. If you say something I don't agree with (on an important basis), It's hard for me to be smitten over you.
Why have I never noticed this before for romcoms?