A hotshot attorney is pranked by a rival attorney and left heart-broken and defeated. When his rival joins his prestigious law firm, the two must work together despite their history. Reluctantly, they collaborate on a case and come to uncover the corruption that's under their very feet.

A hotshot attorney is pranked by a rival attorney and left heart-broken and defeated. When his rival joins his prestigious law firm, the two must work together despite their history. Reluctantly, they collaborate on a case and come to uncover the corruption that's under their very feet. 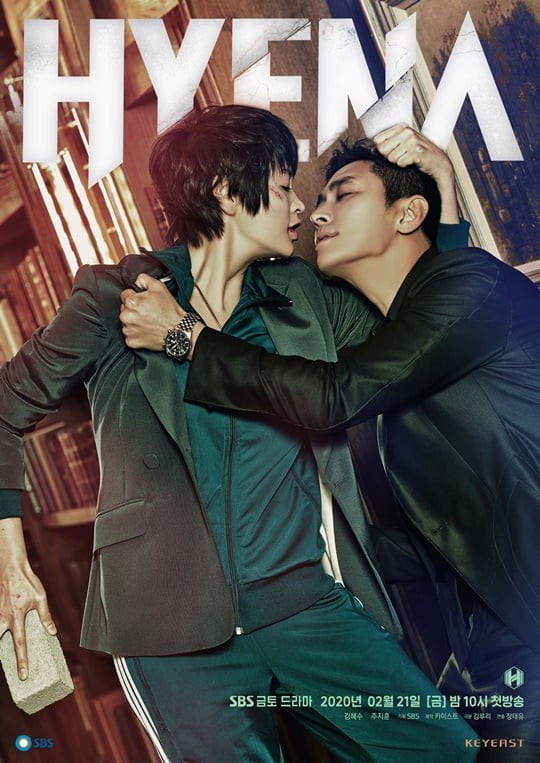 More promos have been released for SBS’s upcoming drama Hyena, featuring the lead actors in a new poster and fun new video teaser.

The drama stars Kim Hye-soo (Signal) and Joo Ji-hoon (Item) as rival lawyers in an industry where money is the key to winning and the competition is ruthless and hard-boiled. As a result of this fierce environment, the lawyers of the story become like hyenas in the wild who do whatever it takes to fight and survive.

However, although Kim Hye-soo and Joo Ji-hoon’s characters are rivals, their relationship is also complicated. As suggested by both the newly released poster and teaser, the tension between the two can be read in different ways. And the lines are blurred whether the two are fighting, dancing, or gearing up for something more intimate.

The video starts with Kim Hye-soo and Joo Ji-hoon standing face-to-face and warming up for a fight. The caption introduces their characters as: “Jung Geum-ja vs. Yoon Hee-jae.” In a sequence of shots, we see the two fighting in their office like children in a schoolyard brawl: sneering, taunting, yanking, biting, etc. Text appears intermittently on the screen explaining that there are “No rule. No mercy. No manners.”

Cut to Kim Hye-soo throwing Joo Ji-hoon onto a desk. Pulling him up by his tie towards her, Kim grabs the back of Joo’s head and leans in close. The scene is intercut with text screens declaring, “Outbreak of war between the hyenas!” and “Hyena premieres February 21 at 10 p.m.” Returning to the two characters, the teaser closes with Kim Hye-soo still holding Joo Ji-hoon by his tie and she tilts her head down to give him a peck on the nose.

all i hear is Taemin's song in the background singing "hot hot" and it just might be!

*Waits for day a kdrama delivers on the chemistry it teases*

I am only here for my dose of tracksuit fashion! I hope it delivers on that! Chemistry is already not the point it was teasing.

There were plenty of spiffy tracksuits in PEOPLE WITH FLAWS, just in case you missed it. ;-)

But where are the sequins?! Will we at least see tracksuits with hyena spots? Enquiring minds want to know.

Now I want to see those hyena track suits T_T
Ah people with flaws! Hmm maybe i should check it out at 5x speed and pause for good look at track suit.

Darned if there isn't a hyena-spotted sparkly tracksuit in a parody of SECRET GARDEN... or is it leopard?!
Ha ji won Hyun Bin \secret garden parody \SBS Awards 2010
https://www.youtube.com/watch?v=W5WIeAhZnGU

You can ogle Kim Gab-soo's spoof with the blue tracksuit in ep. 39 of ALL MY LOVE FOR YOU:
http://www.dramabeans.com/2011/01/kim-gab-soos-secret-garden-parody/

I loved to watch HB tracksuits in Secret garden (my first introduction to Tracksuit fashion, lol) , also there were very funny track suits in drinking solo!

Uh is it just me or Oh my Venus for me delivered on that front?

There was loads of sex appeal on that show between the two leads imo.

riiiiiight... *smirk*
(although I know a few examples of real sizzle chemistry)

You could slice bread with those jawlines. But nice smolder. Burnt toast, anyone?

Bet there'll be lots of coffee PPL. And subways.

Let's be honest not all Subways sell coffee!

I'll bring the jam and butter!

A female lawyer with a penchant for tracksuit? Ok, I'm in!

Ah. A hate-love relationship. Making out in the office. Files, sliding off the table, fluttering like feathers.

I could make a joke about kdramas discovering hate sex but they'd have to discover sex first.

They’ll have to discover first you can touch each other when kissing, for instance.

For the longest time, because of peculiar censor restrictions here, the diet of movies I grew up watching never showed any kisses. Instead, the most we got to see was two people huddling behind a shrub or a bouquet, and the shrub/bouquet would shake violently. The rest was left to one's imagination. High-larious - it used to be. Things have improved since, although only marginally.

They need a hot elevator scene. The power gets cut off and the elevator grinds to a halt. He grabs her and she freezes and there is a closeup of their faces, lips inching, inching close, closer, and then...he...he...slumps into a faint.

I blame the Korean Censor government thing they enacted in 2007!! Before that, they use to be more open about sex/skin-ship. But now it's regressing weirdly on that front? Cable dramas are our only hope...

@soulsearch12,
Oh, is that when the censors got busy? The original HYENA (2006) was rated 19. It was surprisingly explicit at times, but aired on tvN in the middle of the night. Thirty-year-old childhood buddies played by Oh Man-seok, Kim Min-jung, and Shin Sung-rok, with Yun Da-hun as OMS's hyung (a washed-up, pretentious writer of trashy novels -- complete with adoring fan club) were hilarious and touching as well as naughty. Some of the ladies were more assertive than the guys, which was a refreshing switch from the usual shrinking violets.
https://wiki.d-addicts.com/Hyena

So I did not find SIGNAL as awesome as some reported it to be. This teaser does not sell this show to me either. Is there any other show where the FL gets to show off her acting chops?

She mostly stars in movies. The other drama that I watched her in was The Queen of Office (2013), but the ML is Oh Ji Ho and that drama isn't that good, so...

Though, shouldn't JJH be working on Kingdom by now? I NEED MY CLOSURE

Why is this hot. I’m so confused.

Do you have the link?

*puts this link away to watch later

That SBS Catch full video is not the same as the short one I saw on twitter and I wasn't prepared for the open mouth-ing and growling past 2:30.

in that close proximity i wonder if they ever think 'to hell with this, i'll just kiss for real!' hohohoho.. and then PD will be yelling cut, cut, i said CUT!

Ummm, what did I just watch? Is this drama gonna do a bait and switch and we’ll really get 15 1/2 episodes of longing looks an occasional accidental finger touch, a wide eyed gravity kiss, and then, maybe, one realistic adult is romantic encounter?

......'a wide eyed gravity kiss, and then, maybe, one realistic adult is romantic encounter?'

LOL. Is it hot in here or is just me? It better deliver!

Btw- I saw a bts clip of the poster making, and it was hot!! Lots of chemistry between the leads, if Song Hye Kyo (originally in the female lead role) I'm not sure if she would've brought the fiery passion needed? Unless I'm mistaken, I never seen her in a role like that?

Whoah, it was all so sexy and rawr but the nose kiss! Takes it to another level of aww... Will so be checking this out.
Also, never knew tracksuit goes that well with blazer...

I took a gander at AsianWiki to see who else is in the cast, and was tickled to spot Kim Young-jae, who appears to be playing Yoon Hee-jae's hyung. He was great in THE KING'S DAUGHTER, SOO BAEK HYANG, in which he portrayed the paranoidly aggressive King of Gaya. He and Prince Myongnong of Baekje had a bitter rivalry, with plenty of verbal sparring and underhanded scheming. Methinks we can look forward to Hee-jae wrangling with bro, and maybe even Dad, as well as Jung Geum-ja. Bring on the sarcasm and superciliousness!