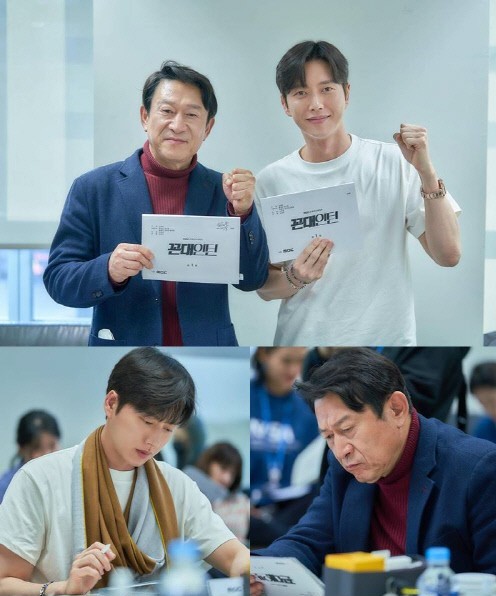 New stills have been released featuring the cast at the first script reading for MBC’s upcoming office comedy Old School Intern, which took place last month on February 8. Present at the reading were leads Park Hae-jin (Forest), Kim Eung-soo (Chief of Staff), and Han Ji-eun (Be Melodramatic), as well as the supporting cast and crew.

Park Hae-jin plays Ga Yeol-chan. Back when he was just a rookie, he had a terrible time working under his former boss who was stickler for all the old school ways of doing things. In the present, however, things have taken a turn as Park is now in upper management as director of marketing. And he decides to take petty revenge when the new senior intern joining his team turns out to be his old boss Kim Eung-soo, who plays the role of Lee Man-sik.

Also working as interns alongside Kim Eung-soo are Han Ji-eun who plays Lee Tae-ri and Noh Jong-hyun (Hell Is Other People) who plays Joo Yoon-soo.

Unfortunately, Park Ki-woong (Rookie Historian Gu Hae-ryung) was not able to attend the first script reading. But he also plays a leading role as CEO of the company, Namgoong Joon-su.

Written by Shin Sora and directed by PD Nam Sung-woo (Kill It), MBC comedy Old School Intern is currently set to premiere in May following Memoir of the Man. 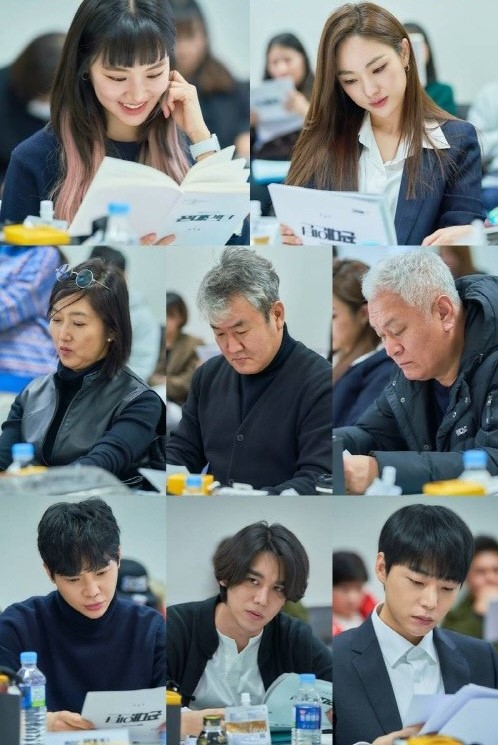 Han Ji-eun! I would try this just for her.

PHJ as a petty businessman reminds me of the rescue-businessman-aegyo-nightmare in Forest. Ottokkeeeeee 😱

With that said...I might give this a try. It's a comedy and the plot sounds okay-iah. Also there's PKW. I like him as one of the evil guys in Return.

He's trying to quickly forget what he found in the forest.

I'm just a recap reader, so I've no idea.

A variety of holes mostly

Maybe some cheese in the trap

I'm waiting for him to find magic mushrooms in the forest. They were mentioned but I haven't seen them yet 🍄🙃.

He’s trying to forget there was a Forest.

And the mutant squirrels driving their Truck of Doom that is equipped with an auger they used to drill holes in the ground to hide their cache of clams...

Nope none of that happened. Nothing since Man x Man...

The clams are there. Silent. Waiting. You never see the clams. They see you.

You hear them, though, the clams. They breathe. In. Out. In. Out.

On the first photo, Oppa trying to be positive. Lol.
Anyway, wishing all the best for his drama. Fighting!

On side note, looks to me he lost some weight, no?

Acting in Forest would certainly put me off my feed.

This could be fun.

Will his character will be different to the one in Forest. I don't know if I can watch Hae-jin in another show.....

I'm excited to see Park Ki Woong, please give a good role and no love triangle!