Jung Hae-in, Chae Soo-bin in new promos for tvN’s A Piece of Your Mind

New promos have been released for tvN’s upcoming romance A Piece of Your Mind, including new stills and a video teaser.

The drama aims to take a closer look at unrequited love – examining how love begins, how it matures, and how it comes to an end. In this story, Jung Hae-in (One Spring Night) plays AI programmer Ha-won who has had an ongoing crush on his first love and old childhood friend for as long as he can remember.

Enter Chae Soo-bin (Fox Bride Star) playing classical sound engineer Seo-woo. As she becomes acquainted to Jung Hae-in’s character and the two get to know each other better, she starts to find herself getting frustrated by his crush on someone else. In the newly released stills, we see the beginnings of Jung Hae-in and Chae Soo-bin’s relationship. The two actors are shown walking together at night and seem to be having a friendly conversation.

The new video focuses on Jung Hae-in’s character and we get a peek at his childhood memories. The video starts with a close-up of Jung as he calls out “Ji-soo” and interacts with some kind of AI device. In a sequence of flashback shots, we see a young boy and girl playing piano and spending time together in the forest: walking, running, biking, and playing. We hear the little girl saying, “Walk slowly on the path.” An older woman’s voice chimes in to say, “…falls down on my shoulders.” Cut back to Jung Hae-in as he walks through the same woods in the present. The teaser comes to a close with his narration: “Your voice is enough. Even if it’s a piece of you that’s half of a half, that’s all I need.”

tvN drama A Piece of Your Mind premieres next week on March 23 and will be airing on Mondays and Tuesdays. 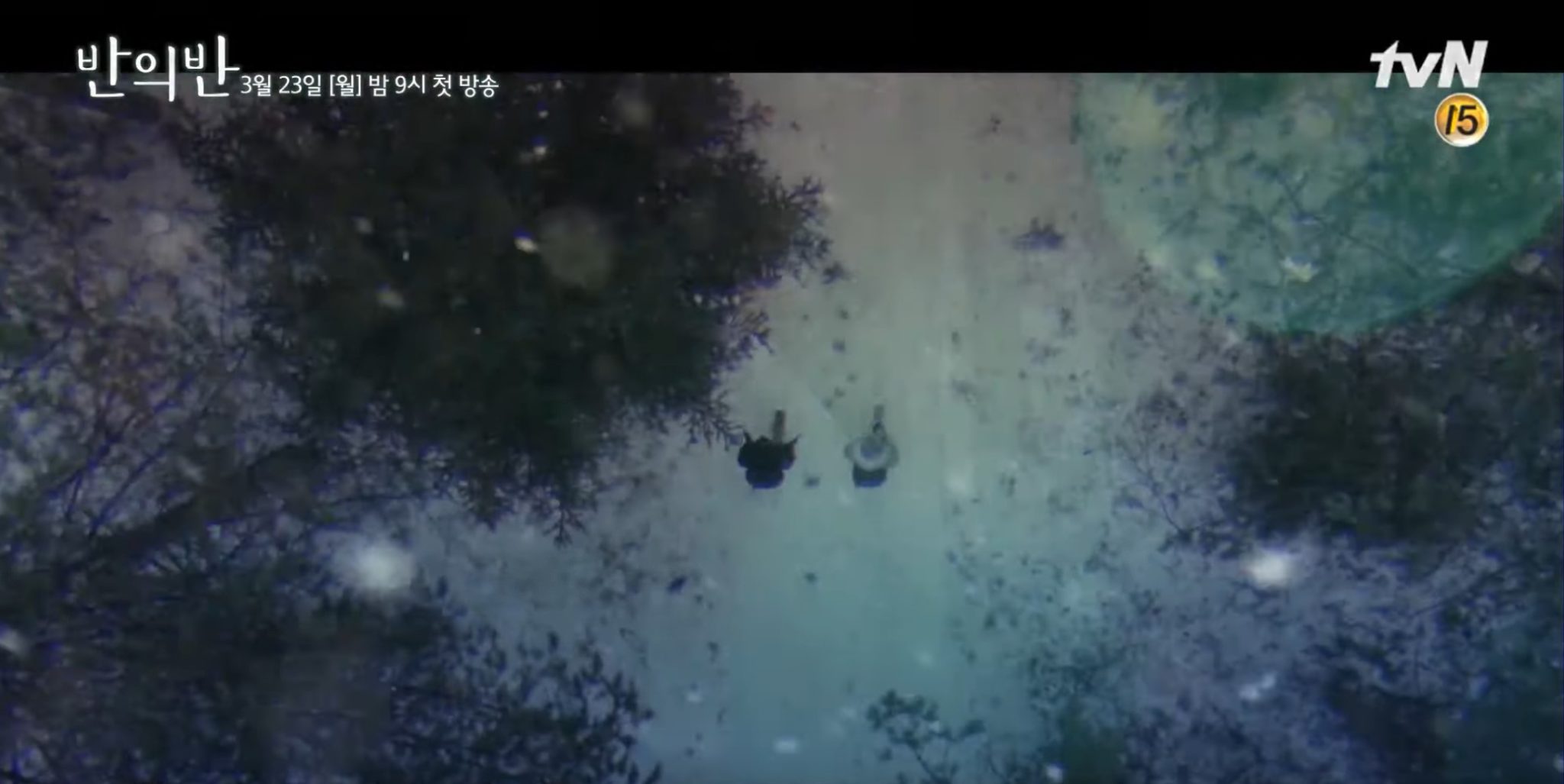 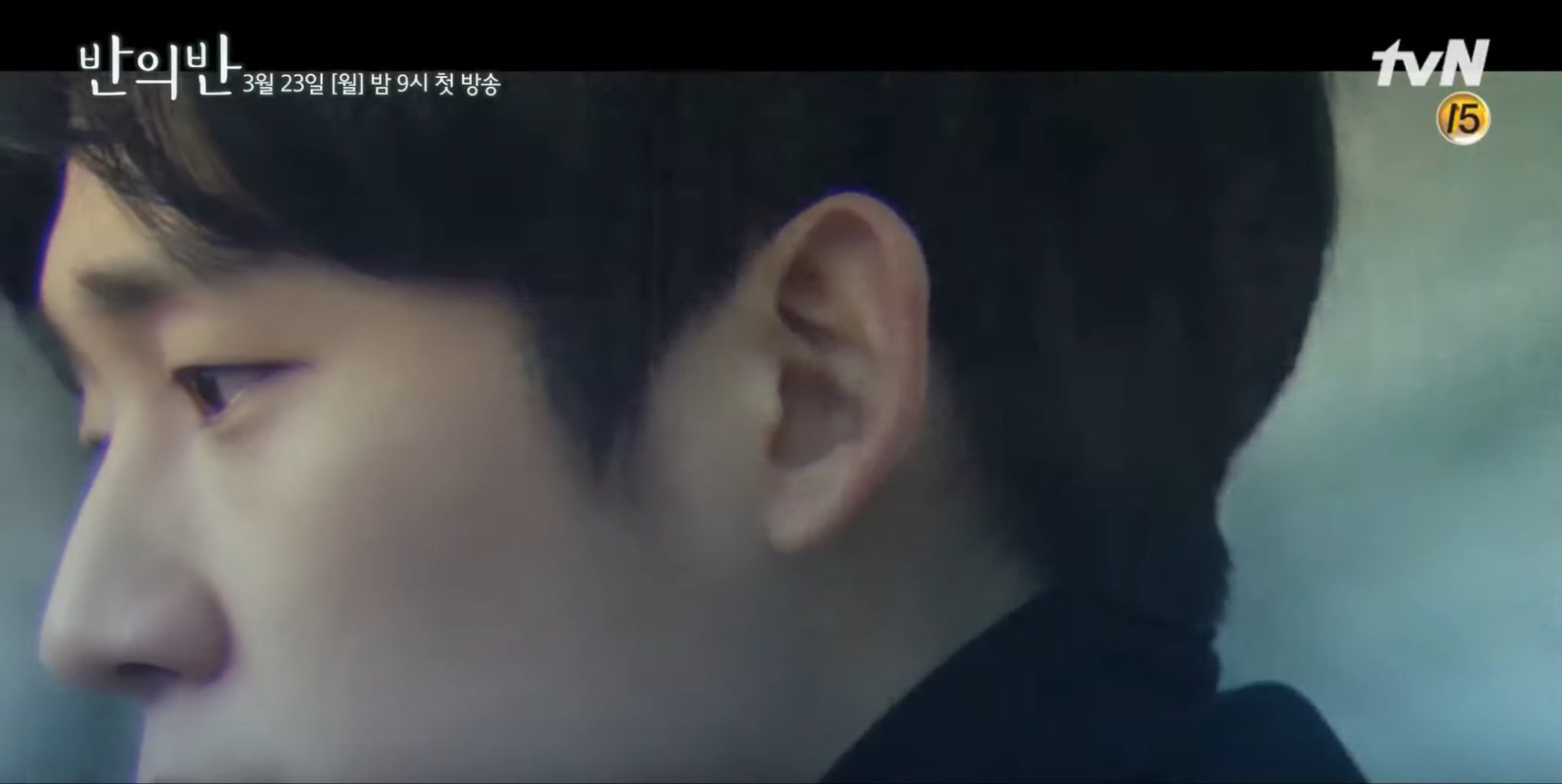 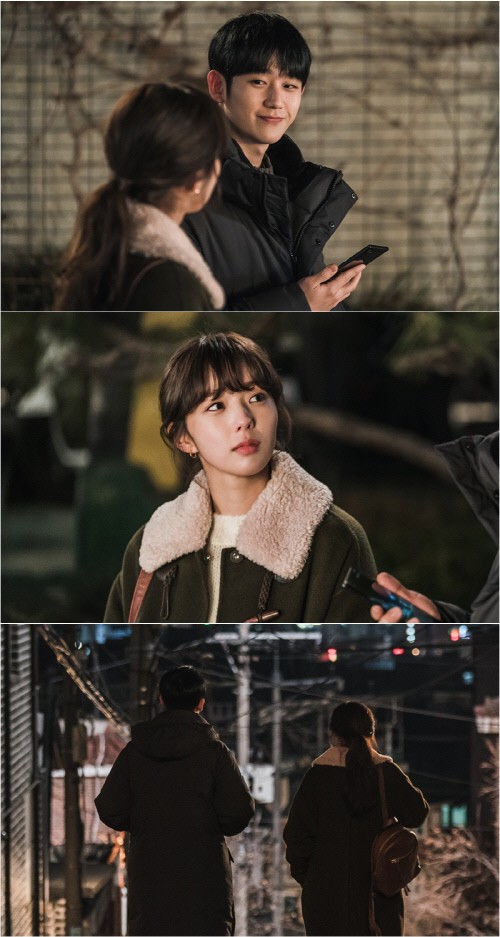 Tags: A Piece of Your Mind, Chae Soo-bin, Jung Hae-in

This gives me I'll Find You on a Beautiful Day feels except Jung Hae-in won't end up with his lifelong crush.

Dude, how about a different genre?

You do make a good point!

I just had the same discussion with my sister (a JHI FANatic), and it would be nice to see him dive into different genres and shed his affable lead persona. He's certainly capable of it, acting-wise... as demonstrated in Prison Playbook.
But I'm sure (hope) he'll get there.

However, I do like the sort of projects he picks*. He seems to be the type of actor who values the overarching storyline... and I quite like that. It's easier to always show up for good stories than good characters as an audience

*Excluding the 2nd half of Pretty Noona ofc! I also didn't watch One Spring Night, because a) it was too similar to his previous drama, 2) I just have never been able to connect to Han Jimin's acting.

Yeah based on what he said himself at the press conference on why he decided on this drama Sound like the script interested him. :)
“I had already decided on ‘A Piece of Your Mind’ as my next project while working on the film ‘Tune In for Love.’ I met with the director and confirmed that the atmosphere on set would be good. The most important thing is the script, which intrigued me. I wanted to take on the challenge of a new theme like ‘artificial intelligence.'”
Even though it is a romance drama sound like it gonna takle different themes than those other drama.

I would honestly be more enthusiastic about it if Han Jimin wasn't in it.

To be fair, alot of Hallyu oriented actors like Lee Min Ho, Kim Soo Hyun, and younger gen Hallyu actor like Park Bo Gum focus on romance genre in Kdrama too. And Jung Hae In is just one of them who focus on the same style of kdrama.

I believe there is a reason to it and nothing wrong with it. This young man is building up his future. He has became the main lead pretty recently and the romantic drama is necessary and also an obvious choice because he is gorgeous and he knows it. Now, I believed once he is consolidated as a well known actor, who can choose, he will challenge himself with other types of dramas.

I was thinking about this and you are kind of right but I think that for him, he likes to collaborate with people he trusts. This is his second time working with the writer (same writer as tune in for love) and he collaborated with PD Ahn twice with his previous dramas. I do kind of like that in a way and both people he has/is working with have good reputations in the industry. As a fan, I do wish to see him show range but I do admire this approach.

I'm really looking forward to this, but I prefer the literal title:Half of a Half a little better. Already in love with the cinematography and tone of this.
And I'm really feeling this casting! Kim Sung-kyu (Kingdom) and Lee Sang-hee (Diary of a Prosecutor)* will also be in it!

* Up until now I thought Lee Sang-hee and Jeon Yeo-bin (Be Melodramatic) were THE SAME PERSON! 🤯😨
Wuuuut! I'm mindblown.

I wish Korean drama stop using this same filter. It is so basic Instagram style instead of the actual real cinematography.

I know they use it for dreamy romance crap, but it's just basic and cheap looking.

I'm sorry but the atmospheric shots of the trees and the sunlight reminds me of another show.
Please let this drama be good.

Oh, man. You too? It gave me the chills, seriously.

I kept on waiting for a coffee ppl scene to pop up.

I'm in for the pains and angst as well :D Do you watch "I'm not a robot" - a drama of Chae Soo-bin before. It's the same story of girl falling in love with a guy who is still in a fantasy about his first love. Ulmimate levels of heart-breaking!

I love him and I’m just super thankful he’s finally paired with a younger actress. 🙏🏼

Kim Go-eun is younger than Jung Hae-in "Tune in for Love."

I love Jung Hae in. I am glad he is receiving so many offers, because then we are able to see him grow as an actor. Also just to see his face, wow, it's a gift.
I was so disappointed and tortured by pretty noona that I didn't watch the night spring or whatever the name was, so I am looking forward to this! ☺

haha, I saw so many bad reviews about Pretty Noona that I hesitate to watch it. But One Spring Night is good in my opinion.

It looks so good! I loved the atmosphere of the trailer.

It's a love story again for Jung Hae In, but it looks different from the other dramas. Even Pretty Noona and One Spring Night were pretty diffrent in term of story and characters.

Thanks for the update on A PIECE OF YOUR MIND / HALF OF A HALF, @tccolb. The snowy woods of Norway of our hero's childhood look lovely -- and remind me of the forest in A MAN AND A WOMAN. The scenes are aesthetically pleasing, and I expect nothing less of PD Lee Sang-yeob after encountering THE KING'S DAUGHTER, SOO BAEK HYANG as my second Kdrama.

One thing is bugging me about the new title. Why isn't it A PIECE OF YOUR HEART? -- and I don't mean it the way the Joseon zombies in KINGDOM would. To give someone a piece of one's mind is to yell at them. It suddenly hit me that it almost sounds as if uri hero became an AI engineer because he lost that childhood friend and wanted to devise a simulacrum of her -- like a Nam Shin III without the mechanical hardware. This way he can hear her voice and carry on conversations with her -- while remaining stuck in the past. Hmmm. Now I'm even more intrigued.

I enjoyed Chae Soo-bin's performance as Ga-ryung in REBEL, and also in HOUSE OF BLUEBIRD. I've only seen Jung Hae-in in GOBLIN, but frankly do not recall his cameo in eps. 7-8.

I'm looking forward to this premiere.

My guess is that, since his/her heart is 100% taken, (by a person or career), then just a bit of his/her mind is good enough. Lol. Must watch for me.

I might watch it but will skip the leads' scenes only to see Kim Sung Kyu in modern style. He looks different without his previous long hair (still impressed by him after Kingdom 1&2 😁)

I admit I have lost the ability to predict a show's quality from watching teasers :)) I have been let down lately by the shows I highly anticipated. I have waited for them mainly because of my biased actors and actresses. But then I may get bored very soon because of the scripts. But then I would surprisingly enjoy some other dramas that I had never set eyes on, like Hospital Playlist. I just learnt some that that I should keep my expection low. But then with Jung Hae-in and Chae Soo-bin, I really really hope this will be a good drama. I am a bit worried that rom-com stories don't seem to do well in ratings lately.