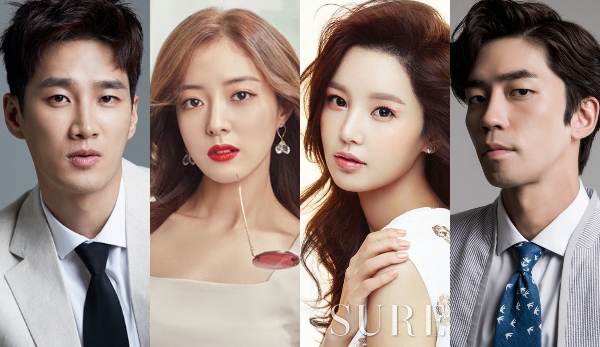 Upcoming MBC drama Kairos has finalized its main casting lineup. Kairos is a timeslip fantasy thriller drama about rescuing lost loved ones. It looks like there’s at least two timelines to keep track of. One month in the future, there’s a man who is despairing due to the kidnapping of his young daughter. One month in the past, there’s a woman who is trying to pursue the truth behind the disappearance of her mother.

Shin Sung-rok (Vagabond) plays a man who has spent all his energy on attaining success and he became the youngest-ever director at his company. He seemingly has everything, including a perfect family with Nam Gyuri (Different Dreams) as his beautiful wife who is a professional violinist. However, one day he loses all that he has, including his daughter. Desperate to recover everything he lost, he begins to communicate with Lee Se-young (Memorist), a woman from the past timeline.

Lee Se-young’s character has lived a hard life. In order to save up to pay for her mom’s surgery, she works part-time gigs as well as being a full-time student. Then, one day her mother disappears and she’s at a complete loss. She receives a communication from Shin Sung-rok’s character from the future, and they begin to pursue their goals together.

Ahn Bo-hyun (Itaewon Class) plays a department head at Shin Sung-rok’s company who’s intelligent and capable. He’s the first one to notice a problem in one of Shin Sung-rok’s projects at work.

Kairos is scheduled to air on MBC in the latter half of this year.

This sounds kind of unusual - only one month between the timelines? So to change the past, the time window is quite narrow. Intriguing.

Yay!!! Welcome back RH! I hope you find your dramaland daughter~ 👨‍👧

I’m in. Blame it on @katakwasabi and on SSR.

No definitely blame you hahaha

I'm really happy SSR has a new drama and I have a new drama to look forward to. I was gutted when he withdraw from Penthouse after confirming it due to scheduling conflict 😭. And then hope he'll return in cute fluff instead. Turns out it's neither cute or fluff...it's a thriller 😨. It's fine! I'll take whatever I can get 😄. As long as there are no ghost, zombies and anything horror 👻.

Fun tidbit: during the first round of casting rumours, the drama was called a "romantic fantasy thriller". Which I thought didn't make sense because how can he focus on romance when his daughter is kidnapped 🙃.
Now that the casting is confirmed and officially announced, I noticed the description has also changed. It's no longer "romantic" but "fantasy thriller" only. Maybe they'll continue their platonic relationship from Trot Lovers 🤭.

I'm a huge "dramas-must-make-narrative-sense" person. I will try to make sense of everything (my recent jumbled up drama is Eternal Monarch 🤯). Timeslip dramas is not my cup of tea. Done well it would be awesome like QIHM and Harry Potter and the Prisoner of Azkaban. I hope the time travelling mechanism is solid and sensible, I really don't want to dissect a drama so much to understand each scene.

Last but not least...welcome back to dramaland Royal Hotness! All the best to the cast and crew, may filming run smoothly.

took the words right out of my mouth! agree with every word! i need me some more of SSR

But Katak... everything is better with zombies, remember? 😜

The only face I recognise is SSR so am intrigued to check this out.
The one month in the past aspect is interesting, will they be contacting each other through a forum? It seems like such an odd collection of a characters, I'm unsure how it will all fit together.

All good actors except for the 49days chick. I love time travel, count me in.

She was decent in Cruel City. This is her 2nd time working with this pd/writer duo. I think she’ll be fine.
I loved Cruel City to pieces and My Beautiful Bride from this writer. Flaws and all.
I’m missing my beautiful banker. I wish they’d cast him in their next project.

I liked her in Heartless City, 49 Days and Children of Nobody too.

Kim Moo Yeol was casted in a movie with Jo Jin Woong and Lee Sung Min.

I've only seen her in 49days, & she was just shy of horrible there. Good to know she has shown better performances in other works.

Agree with you about her performance in 49 days but there is hope with this writer and pd.

I love everyone and I really can't wait but most of all: he's a dad and he gets to have happy moments with a child???? He's gonna be holding a child and waving it around like "yes I made this"???? This is fundamentally important to me and my dwindling sanity in quarantine

he gets to have happy moments with a child???? He's gonna be holding a child and waving it around like "yes I made this"????

I hope all this happens! It needs to happen. Hahaha

SSR is enough to make me watch this one (same with his other dramas hehe).

And Lee Se-young with SSR reminds me of Trot Lovers. Can't wait to see them together on a project again!

12 YY Chats with Toast Between Bites

This reminds me of the movie, Frequency, starring Dennis Quaid. A woman is murdered in the past. Her son grows up, and one day, discovers an old ham radio in the barn. He uses it to communicate with his late father, who is still alive, in a different timeline. Together, they try to save his mother.

I think he will try to save his wife and son with the woman from the past.

I have a soft spot for Nam Gyuri. Loved her in Heartless City. She had sizzling chemistry with JKH. And she broke my heart in 49 Days.

ooh this sounds good! thanks!

I love SSR!! He is hilarious in his dramas especially Last Empress... Even though his character was awful, I couldnt hate him.. lol..