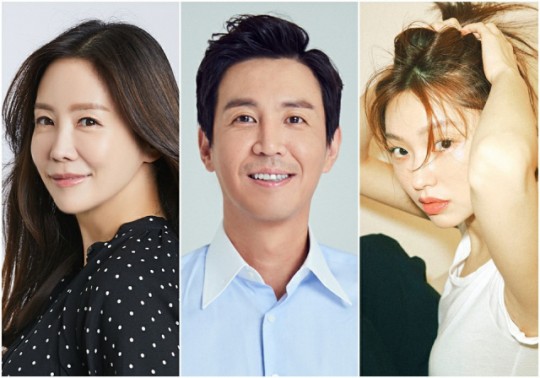 MBN has a new drama in the works called My Dangerous Wife, and casting has been confirmed for Choi Won-young (Mystic Pop-up Bar), Kim Jung-eun (Duel), and Choi Yoo-hwa (Class of Lies).

The story is centered around a couple who initially married for love, but now are just going through the motions and doing the bare minimum to maintain their married life. Although marriage had once seemed safe and secure, a frightening realization has now set in — they’ve been living with their most dangerous enemy and are now at war. Through this conflict, the drama aims to take a deeper look at marriage and relationships, and explores what it means to fail or succeed within these contexts.

Kim Jung-eun plays one half of the central couple, wife Shim Jae-kyung. She seems to have it all: she’s beautiful, intelligent, kind and she’s also a very talented and competent career woman. Her dream had simply been to live happily in love with her husband for the rest of their lives, as promised in their wedding vows. But she suddenly becomes embroiled in a mysterious kidnapping incident, creating trauma for everyone around her.

Choi Won-young plays husband Kim Yoon-chul, a successful celebrity chef with good looks, wealth, and a cheerful personality. Together with his wife, they were the image of a perfect couple when they first got married. Fast forward 6 years; their relationship is now in a rut. Struggling with feelings of dread about his home life, he finds refuge in his work and puts all of his heart and soul into his career.

Choi Yoo-hwa takes on the character Jin Sun-mi, who works at Choi Won-young’s Italian restaurant and is said to have a special relationship with him. Having struggled with poverty and many different challenges while growing up, she developed a tough personality and a strong sense of self-preservation. In order to achieve her goals and get what she wants, she’s willing to use any means and do whatever it takes.

Four months into a period largely stuck at home with family, with no end in sight and having recently endured Marriage Story on Netflix ("endure" is a comment on the the subject matter, not quality of the production, which is excellent), I am calling personal moratorium on intense domestic dramas. Fairy tales, time travel, millennium-old supernatural beings, sure, bring 'em on but couples destroying each other, forget it.

Is it just me or does it seem that primetime dramaland is showcasing more actors 40+ in complex, sexy roles? Or is that I hunger for more shexy middle-aged shenanigans?

I'm looking forward to this. Up till now, I've skipped all the recent bad-marriage-melos of the past year. Like @halofan68, I've been immersing myself in fantasies to escape the pandemic but I'm ready for something a little saltier.

Mydramalist says this is a remake of the Japanese series, Boku no Yabai Tsuma. I haven't seen the parent story but I'm sure everyone is horrible. Huhuhu!

I am guessing like you, I am of an age where I find the Hallyu stars on the other side of forty or rapidly approaching it are the most glamorous and beautiful, male or female. The more dramas like When My Love Blooms, the better. (I realize many found it too slow but I prefer the description deliberately paced :) My dream drama would be a pairing like Kim Myung-Min and Kim Nam-joo in a series with Hepburn-Tracy type of vibe.

Indeed! In 2018, Yoon Eun Hye returned to dramaland after a five-year absence. I was heartbroken to read viewers criticize Yoo Eun Hye for aging. One commenter on a random drama blog called her "old and cracked." YEH was 32 at the time. Thirty-*******-two years old. Aaaarrrrgggghhhh!

Usually I would say no to this... but it's Manager Gwi *hearteyes*! I am curious how far my love for him will take me watching this drama.

I usually stay away from dramas that deals with post-marriage, divorce and cheating, but I am looking forward to this drama with Choi (manager gyu) Won-young and 'Flower of evil' with Lee jun ki (He's so hot! sigh...). Choi Won-young will be awesome in any role he plays and Lee jun ki.........well, a handsome face with questionable morals who fights well?.....I'm so in!! Please let the stories be good.

Not that the plot is attractive to me, but I really want to see Choi Won-young in a leading role. So maybe.

I was wondering where I recognised Choi Yoo-hwa from - she's Moon Hyo-jin in Age of Youth 2! To think such a small role has left such an impact on me.

The synopsis of this drama is meh but I love Choi Won Young. I'm happy that he is playing the lead in this one. He is a very underrated actor. I have never watched him put in a bad performance.