Let Me Be Your Knight 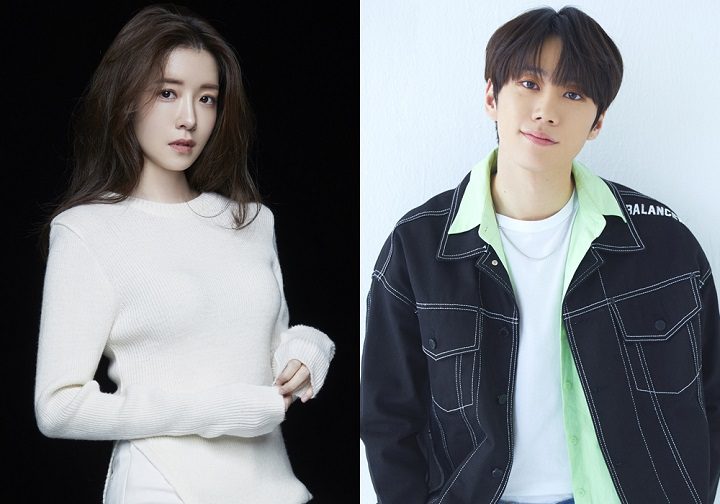 SBS has a new romantic comedy lined up called I’ll Be Your Night, and actors Jung In-sun (How To Be Thirty) and U-KISS’s Jun (Imitation) are set to play the lead roles.

Taking place within the world of the K-pop music industry, the drama stars Jun in the role of Yoon Tae-in. One of five members in the internationally famous idol band Luna, Yoon Tae-in is the leader as well as the vocalist and producer for the group. Since his debut, he’s kept his eyes fixed on achieving success and spares no time for any fears or doubts that might get in his way. He pushes forward with what he thinks is right and it’s difficult for others to break through his stubborn exterior. One thing that does shake his resolve, however, is that he suffers from somnambulism and he hides his illness from his fans and the public.

Enter Jung In-sun who plays a tour guide named In Yoon-joo. Sunny, warm-hearted, and sociable, her disposition and love for people are put to great use in her job. She was living an ordinary life and saving up to buy her own house, but she gets thrown for a loop when she somehow gets into a mishap with Luna and is mistaken for a medical professional. Naturally, this leads to her moving in with the five bandmates at their dormitory, the pretense being that she’ll be their live-in physician and secretly treat Jun’s condition away from the public eye.

Directing for the drama will be helmed by PD Ahn Ji-sook and scripts will be penned collaboratively by Yoo So-won and Seo Jung-eun.SBS rom-com I’ll Be Your Night is currently being planned to air towards the end of this year.

Tags: Jun, Jung In-sun, Let Me Be Your Knight

It will be interesting to see who will be cast as the other members of Luna.

NU’EST’s JR has already been confirmed to be making his drama debut as the band’s bassist Lee Shin, while Yoon Ji Sung will play the band’s drummer Kim Yoo Chan. AB6IX‘s Kim Dong Hyun will be playing LUNA’s keyboardist and youngest member Gaon. From Soompi

It seems Jun has found his niche in the industry - playing idols. Good for him, tbh. His performance in Imitation was super fun.

Good for me too. I am used to seeing U-Kiss' with the old line-up and have never seen him performing with the group so it's nice seeing him playing an idol in Imitation.

Color me a bit skeptical about the premise of this story. But it could still be fun if it is well written.

the story may be worn out and overused but if well written and well acted, it may be as fresh as the morning dew.
the leads' chemistry also matters — like in so many remakes, one may not get tired rewatching the same old story when told in a different approach.
how many versions of boys before flower versions have you seen; which of the hana kimis impressed you?; which of the nodame cantabille version is to your liking? which of the absolute boyfriends do you find compatible to your personality? which of the 'started with the first kiss' do you find most romantic?…

I think that I was mostly reacting to the "mistaken for a medical professional" phrase most of all- but I realize that this may be more a question of 'by whom?' than anything else.

It was surprising to us, given that the Mainland Chinese generally do not seem to do re-makes that well (probably because of censorship), that our favorite version of NODAME CANTABILE turned out to be the recent SYPHONY'S ROMANCE- and in part because the story was changed substantially from the original manga.

You point is well taken and I would add another: The total number of re-makes of a story- whether it is a specific story or just a general plotline- may be a measure of how good a story is. ITAZZURA NA KISSU is a great story (my favorite version is MISCHEIVIOUS KISS: LOVE IN TOKYO- but to truly appreciate it you have to watch both seasons) which has been turned into a drama in several countries, sometimes more than once.

I get it's a misunderstanding and they legitimately try to get a professional, but it would be nice to see an actual professional help him and this girl could just have all the cohabitation hijinxs. But, my guess is love solves all before everything is revealed.

Of course her love would cure his somnambulism and all other problems in the world (including covid-19). She will also turn out to be his long-lost childhood love who is the key to his dark, tragic past. Mark my word.

That will be the official title Let Me Be Your Knight which will be premiering on November 7, 2021 (Sunday).