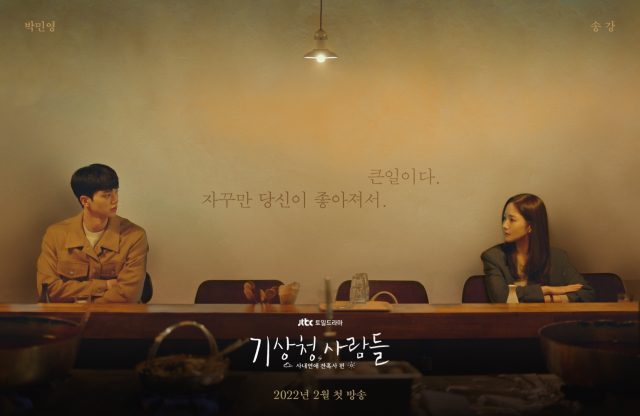 JTBC’s upcoming office romance Weather People (working title) has released another set of video teasers, this time giving us a better look at Park Min-young (I’ll Find You on a Beautiful Day) and Song Kang (Nevertheless) on the job at Korea’s National Weather Bureau.

With weather serving as the background and theme of the drama, Park Min-young and Song Kang play co-workers who fall in love, and the story explores both the thrills and complications that come from dating within the workplace. As the two try in vain to keep their relationship a secret and separate their personal life from work, hijinks naturally ensue.

The first teaser opens with both Park Min-young and Song Kang looking up at the sky and observing the day’s weather. In the text screen that follows, we read: “Even with a 1% chance, the weather can change just as people can change too.” The teaser then cuts to Lee Sung-wook (The Silent Sea) who argues, “Forecasting is about probability,” and Song Kang retorts, “That’s why it’s wrong every day.” Meanwhile, Kwon Hae-hyo (Undercover) reprimands Moon Tae-yoo (Hospital Playlist 2) saying, “Who said you could release this special report without my permission!”

Park Min-young offers her opinion as well, “Even if it’s just a prediction, I think it is our duty to ensure we have more accurate data as a basis for the predictions.” Song Kang is impressed with her response and Kwon Hae-hyo addresses the team to encourage them to press on with their work. In a sequence of shots, we see the team carry on with their job duties. As we see Park Min-young and Song Kang smile at each other, the teaser comes to a close with Park’s narration, “I will tell you about tomorrow’s forecast.”

The second video starts with Song Kang’s warning about an approaching storm cloud and pouring rain. A frustrated Park Min-young asks him, “Who do you think you are?” but Song merely replies, “The rain is definitely going to come.” Sure enough, rain soon starts to fall and Park turns to look at him again. The same text screen from the first teaser appears, reading: “Even with a 1% chance, the weather can change just as people can change too.”

The teaser then jumps to Song Kang watching Park Min-young work and he muses to himself that his feelings for Park keep growing. Having started dating, he sneaks a hug at work and reassures her that they won’t get caught. In another text screen, we read: “The cruel tale of risky office romance.”

A worried Song Kang approaches Park Min-young after she overreacts to his conversation with another colleague. Still annoyed, she avoids his gaze and tells him in a formal voice, “Please refrain from discussing personal matters during work hours.” In the next sequence, we see the two stuck in many awkward situations and almost getting caught by Moon Tae-yoo several times. In the closing scenes, the two hold hands and smile at each other while Park laments, “Dating in the workplace will be the death of me.”

Written by Sun Young and directed by PD Cha Young-hoon (When the Camellia Blooms), JTBC’s Weather People premieres in February.

The story explores both the thrills and complications that come from dating within the workplace.

Is this the entire plot of the drama? Not seeing how it'll provide enough material for 16(?) episodes.

That's true, but those dramas always end up draggggggging. The only time minimal plot works is for the slice-of-life genre, which I don't believe this drama is.

Or has spectacular chemistry (which this drama may be questionable on too), but I will say a guilty pleasure drama of mine is Touch Your Heart. Nothing really to it but the leads are adorable, so maybe we can hope for at least that much.

To me, Song Kang looks wholly outclassed by Park Min-young in this teaser. I cannot think of a noona romance where one half seems so completely out of the other's league.

Agreed. I find him quite limited and one note. Perhaps he wasn’t directed well but his constant stridency in Navillera started to alienate me despite my fierce love for the Drama. And, I hate myself for saying this as it is wrong, wrong, wrong but his small head is weirding me out. Yes, I’m chastened by this horrible reaction but can’t help myself. Bad bad Em!

"And, I hate myself for saying this as it is wrong, wrong, wrong but his small head is weirding me out."
Em, I call this.... the 'baymax proportions' :P
Good luck getting *that* out of your head! xD

Oh no, that small head thing is something I’ve always subconsciously noticed at the back of my head but never fully gave thought to. But now that you’ve said it… I cannot unsee.

*back of my MIND.

This talk of heads has ruined my understanding of idioms, apparently.

You made me laugh. That was gold!

Sorry! I really tried to resist including it but my evil side won out at the end.

It doesn't help that he's wearing casual clothes in all the photos while she is wearing a suit. She looks mature enough to be a mom. He looks like a college kid.

I think I'll pass on this one.

Every time I see them together, I can’t help but think of this one comment about the pair I saw on twitter:

“She looks like a cool aunt with her nephew.”

Now, maybe that comment was a bit ageist, but honestly the main couple looks so jarringly mismatched that I… have to agree. I like Park Min-young a lot and I also like a well-written noona romance, but this is just not working.

Also side-note, since this is a noona romance, is Park Min-young supposed to be Song Kang’s superior at work? Because if she is, then that brings in a whole new can of worms. I know office romances between work superiors/subordinates are common in dramas, but it’s still not a trope I like (there are exceptions to the rule ofc). The genders being switched in this case doesn’t change my usual opinion on it.

Even if it's not a noona romance and just the age difference between them, they just seem so awkwardly matched. There's a 7 year difference between PMY and Seo Kang-joon, but I honestly wouldn't have realized that in When the Weather is Fine because they were well matched in casting.

Exactly. The pair just seems incredibly awkward together. The age-gap itself isn’t the issue since I’ve seen pairs with similar or bigger age differences that were fine. This has to be a problem with this specific casting choice.

I probably will get drawn into this drama but the number of alternate titles for WEATHER PEOPLE is impressive. This is from MyDramaList which is going with FORECASTING LOVE AND WEATHER:

Here is my source:
https://mydramalist.com/692969-office-romance-cruelty

Is the use of the words cruelty/cruel ominous?

Or it means a more interesting story anyway

Still not convincing me.

seriously, gonna watch for The Weather.

Their forecasts will at least be more accurate

Well at least the ‘rain maker’ production folks will be getting some work.

Seems like a breezy watch, I'll give it the ol' 4 episode crack and see if I stick with it from there :)

This kind of story rests a lot on the chemistry between the leads. It can be very swoony and romantic or completely boring.

Sadly, I didn't see any sparks between PMY and SK in the trailers.

I like the poster, but its vibe seems very different from the one in the trailer.

Agree. I remember when the casting was announced for this - I was so disappointed. I am a fan of PMY but not so much of SK, and definitely not together. I'm also afraid this will be a re-run of WWWSK. I think PMY is a strong actress, but I'm a little bewildered by this choice, if I'm honest.

I just want to know where I can watch it once it is broadcast.