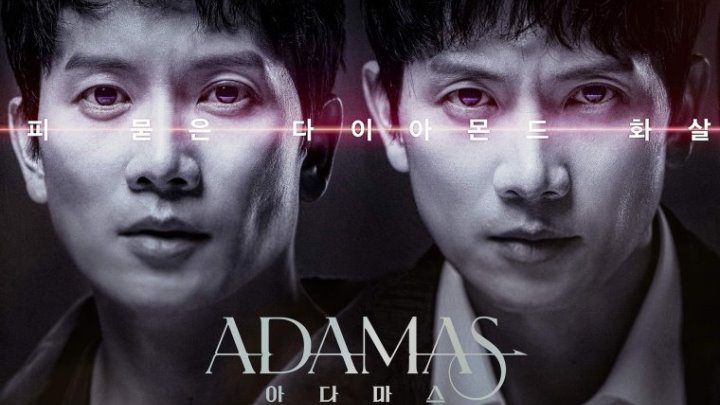 Having just finished the final episode of Adamas, I came here for a palate cleanser. Instead I find the option of writing a review, not something I'm at all prepared for. Instead, I'm going for some cathartic writing. Ji Sung is, as usual, a consummate and accomplished actor, something he demonstrated long ago in Kill Me, Heal Me. Playing the twins, Prosecutor Song Soo-hyun and the popular novelist, Ha Woo-sin, in Adamas is a piece of cake for him and affords him the opportunity to flex his acting chops in some intensely emotional moments. As Ha, he gains entry to the mausoleum-like home of the chaebol President Kwon, ostensibly to write his biography, but with his own personal agenda that is gradually unfolded as he explores the corridors of the cold and mysterious house looking for the bejewelled Adamas. Every person in the house, with their own tangled stories and all consuming self interest, becomes involved in what develops. Unfortunately for me, at least, as a viewer, the tension in the plot ends up being basically a series of shoot outs between the Team A, the chaebol's cleaners, and the unnamed and self-sacrificing people of the Special Investigation Headquarters, neither of whom officially exist, and both of whom are morally and ethically reprehensible. By the end, it appears that the status quo has prevailed at the cost of many lives. And what is unresolved points us towards a second season. This, following on the Devil Judge, once again strikes a profoundly depressing nihilistic chord. Power is indestructible, and the courage of the individual of integrity who challenges that power is throwing eggs at a fortress.

I'm going to be honest, I think this is a show that works if its your style of show, and will be found boring and will drag otherwise.

If it works for you, and you should be able to tell from the first few episodes, then the ride is fun; it's well acted and extremely stylishly directed and maintains enough thematic, plot and character curiosity to keep one invested for the majority of the run time.

But if you're not feeling the style and slow burn direction of this show from early enough on, then you should drop, because it's not going to be for you.

However, the ending should've been a Eucatastrophe, and wasn't, so you have been warned, that either way you swing, it may cause strife.

I disliked the ending, but the story was good and engaging till Ep 14. In fact, I can say it is one of the few shows of 2022, that got the mystery/thriller genre right.

The directing in this drama is astounding, but the writing itself is not so bad, given the fact the writer is a rookie.

Ji Sung can never go wrong, especially double Ji sung was a delight to watch, but the other actors were also equally remarkable.

When I first set in to watch Adamas, this was what I thought it was about. However the show was clear on what it was going to do with regards to the plot and I was absolutely wrong. So see what it is about yourself and you won't be disappointed.

Adamas isn't everyone's fest. If it doesn't resonate with you quickly it is very easy to lose interest. So do your best to watch without a long spaced break in-between. It's an intriguing thriller at its peak and a marathon watch is the best way to enjoy thrillers.

i liked it overall as Ji Sung killed his parts as he always does. He is very engaging to watch. i still have the last 3 episodes to watch so maybe i will change my mind when the last bird calls. the thing i find hard to watch any show with is the lighting factor. It was just too dark a lot of the time and i couldn't figure out what was going on for sure. i like to capture the finer details to help understand the plot and i feel I missed some of the details.

It has a lot of loopholes but plot keeps you engaged upto certain extent. Too many things going on and there is no moment of calmness. Overall, an okay drama. Beware of sudden gory violence in some scenes.

It was boring at times and exciting at other times.The best part is Ji sung being two character.He's awesome. I actually dropped it a few times, but I was glad I continued to watch; till the ending. After all that happened it should have been had a more satisfying one.

This series started out as a slow burn mystery thriller with Jisung as the twins. They try to find the actual culprit who killed their step father 22 years ago and the murder weapon used, which they do but at what cost? How are actually going to accomplish this against a corporate giant? do they win or lose?

This is an interesting watch with plenty of shady characters with ulterior motives and power play, nobody is honest except the twins and the reporter. If you are fan of slow build up stories you might actually like it. It's visually fantastic, good bgms, editing, terrific actors and what not. In my opinion I think the screenplay could've been better. They had 16 episodes to tell us a story and complete it, if that's not enough they could've had 20 episodes and finished the story. I'm not talking about bringing down Haesong, but atleast they could've resolved the main plot involving the twins. Till ep 9 things were getting set up and from then the series picks up speed (in a good way) with many actions sequences, heart wrenching revelations and the conclusion we were given, with way too many open threads cannot be justified . Had this been already renewed for another season like how American tv/Netflix works sometimes, we audiences would've been actually looking forward to it. Thess 16 episodes feels more like a groundwork for a potential or should I say hopeful S2?

[REDACTED DUE TO SPOILERS]

Im not sure how renewals works in kdramas, I assume ratings do impact them. Sadly, Adamas didn't get much ratings on TV but I've seen some posts from Disney+ that it's been on top 10 in few Asian countries. My naive brain wants to believe that there may be a sequel, since it was popular atleast in OTT, so that I can get a conclusion atleast for the twins fate and even better bringing down Haesong. A girl can hope right?!