Today I learnt the hard-way that you can’t gift modern kids with “old kiddie classics” without having read it first with a grown-up’s mindset.
I found out recently that the beloved WIZARD OF OZ has 13 sequels and was overjoyed.
At 1st.
In the very 2nd sequel, you see a girl who was turned into a boy when she was a babe, and when now he doesn’t have any memory of it and quite like being a boy, but against his will and without giving him time to think it through, he’s turned back into a girl once again.
And in a women’s revolt, all women drop house duties and men has to wear aprons and babysit, and they learn a lesson which I was quite satisfied about, but at the end of the day ladies eagerly run back to the kitchen in order to “retain order and harmony”.
In another sequel, a mythical country is based upon “China”, where everybody are stereotyped and eat cats.
Now, a man of his time and probably a good man at that, Frank Baum must not have meant any harm, and the kiddie readers I guess, didn’t have the same “ugh” reaction as I did.
Plus they’re simple and short fast-paced kiddie stories and characters aren’t allowed much “thinking time”……BUT kids GROW up reading these stories and with THIS mentality growing and blossoming inside them as they go, right?
So I’m just gonna respect them for what they WERE and treat them as classics, but won’t let them near a kid anytime, at all if I could.
The following pic depicts Oz men happily stomping aprons and kicking tubs upon the return of the women.*shudders* 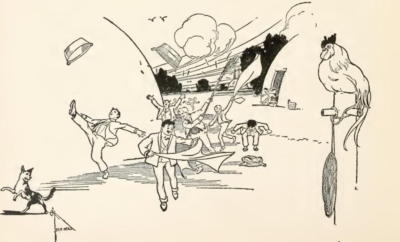 Ugh indeed, that illustration is ridiculous too but I don’t think stories like that need to be kept away from children. Not necessarily. A lot of kids can read or watch stories with elements like that without letting it influence them, and it can open up discussions in school and with families about the time the story was written and what is wrong with that sort of thinking.

True that. If the child is someone close to me I’m not gonna drag it outta their hands. I’ll have discussions with them. But if I am to gift it to a child I don’t have assurance that I’ll get to talk with them later nor that their parents and teachers are open-to-discussions people…..that won’t do.
My own cousin sister- Me: Hey how was the book? What do you think of that scene?
Sister: Hmmm.
🤷‍♀️ So I don’t know what’s going on inside her head and how she defines the scenes in her mind. I’d rather not give her this book in case it’d be dangerous!

Also I think I’ll have to up the age group 🤔
The book is recommended for 5-8 and “ok” for above 8, but it calls for some advanced discussions about serious issues as of today, which is better suited for above 8?
5-8 kids need books that gives them more read-and-understand themes and acceptable-in-this-age themes, rather than multiple controversial themes scattered all over the book?
Having adults explain too much stuff after each book (14 books!) might discourage them from reading.

Agree, unless it was close family and friends I wouldn’t want to gift a book like these for that reason too.