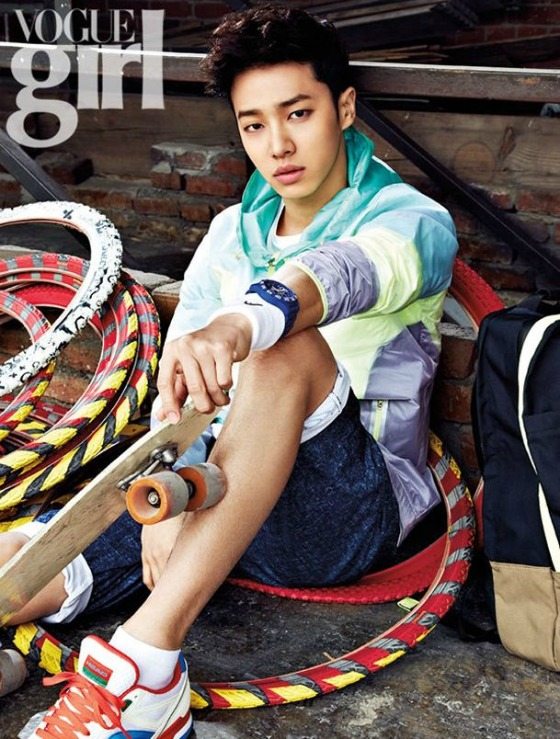 The latest addition to sci-fi drama Circle is Lee Ki-kwang (Mrs. Cop, Monster). It’ll be his first acting role after the breakup of his idol group B2ST and its re-formation as Highlight. He has been cast as a metropolis government worker in the year 2037 in the experimental 10-episode tvN drama that takes place in two time streams: 2017 and 2037.

For the 2017 story, Yeo Jin-gu (Jackpot) has been confirmed as the lead character who is a college student when the first aliens from outer space arrive on earth. Gong Seung-yeon (Introverted Boss) is up to play a fellow college student so maybe there’ll be a cute noona side plot?

Much happens in twenty years, and by 2037, the world has been divided into a “Smart Earth” where artificial intelligence has created a utopian environment in which no diseases or crimes exist, and an “Ordinary Earth” where people still suffer from rampant plague and lawlessness. Actor Kim Kang-woo will be playing a passionate detective from Ordinary Earth who somehow gets involved in a case that revolves around the same events that happen in Yeo Jin-gu’s timeline. Anyone reminded of the Hunger Games’s Capital and District 12?

I love both Yeo Jin-gu and Kim Kang-woo’s styles of acting, so I can’t wait to see their chemistry. This sci-fi genre can be a tricky beast sometimes especially if they’ll be dealing with CG effects they can’t see or emoting from a perspective we’ve never been in (e.g., aliens invading the Earth). I haven’t seen too much of Lee Ki-kwang, but he was an adorable puppy in both My Princess and Me Too, Flower so maybe he’ll be great in this too.

Upcoming drama Circle has been slated to be broadcast on tvN sometime in May.

Also, this drama looks super interesting. I love Yeo Jingu but didn't want to watch Orange Marmalade or Jackpot so I hope Circle is good.

So basically Elysium with a flashback and with more AI?

Well, I haven't seen much sci-fi Korean material, so it's refreshing to me...but not necessarily interesting...

But I'll definitely read the recaps if DB will recap. Otherwise, I'll probably forget about this...

Not familiar with his acting but he is very cute.

Also really excited about this drama. I'm happy to see something new and with 10 episodes there's fewer chances of dragging or the plot falling apart. Hopefully it turns out to be a good watch!

I loved him in Monster. Happy to see him in another project.

Yep, might be my next "can't wait for the next episode" drama.

Yayyyy! Hoping this will be a good role for Kikwang.

I'm glad that the recent problems with their old management are not deterring them from being active with new projects.

Hope to see new casting announcements for Doojoon too! ;)

I hope this drama's good. GK improves everytime he acts. It was a good surprise how he was good in Monster. Me too, I miss actor DooJoon!

This actually reminds me of Blade Runner

8 matcha and the beer

Yeah finally we will get something new in dramaland. I'm expecting a lot from this drama.
As for Lee Gikwang, I'm happy to see him back in dramaland as Highlight member, hope to see Yoon dujun back too.

Yessss. And Do Joon and Kim Seul Gi's reunion.

... So 1 episode a week then? I don't like that format cuz I'm the impatient type so I'd rather wait til a couple episodes out and then watch.

Oooh I'm curious about how Lee Ki-kwang will play an emotionless character. I've only seen him in My Princess where he was so adorable and alive as the palace cook still he showed depth as the teenage Kang Ji-hwan in Monster.
I also thought that Kim Kang-woo will play a detective with no feeling but it's good to know that he will be of "human" personality. He is versatile in diverse roles but a small part of me wanted him to play a detective who doesn't go by the law. *^^*
The storyline is interesting and kind of reminds me of the sci-fi novel The Host by Stephanie Meyer without the mund possession part by the aliens.

OMG WHAAAAAAAAT BEAST broke up?? Uni seriously what are you doing to me!!! I didn t even know abt it!!!! I feel like I m living under a rock ><

They didn't REALLY break up. B2st left Cube, but Cube holds all the rights to the Beast/B2st name/trademarks (if you will). So they cannot legally refer to themselves as Beast/B2st anymore. They formed their own company and are now calling themselves HIGHLIGHT, which is the name of their last album. There was/is talk of Cube recreating Beast/B2st with Hyungseng, who left the group a year or two ago, and two new performers. Not sure if that will actually happen or not... tbd... IMHO - Cube must be pretty desperate to do that, since HS wasn't even a Beast/B2st member the last couple of years and then to add 2 new people... but legally they can do it since they own the Beast/B2st name... ?

Once they left the Cube, their activities have been increasing. I am glad they left the Cube. I only wish they could have kept the Beast name. What the Cube did to them to take away the Beast name from the members is awful. But they changed the name to Highlight and they will keep moving on. Let's see how LKG play the detective role this time. He was quite good in Monster so I expect that he will do well this time as well.

They didn't. I think the writer was confused with Beast/Higlight's situation

He looks like a slim-faced, softened Lee Seung Gi in that pic.

Writer-nim. Beast hasn't disbanded yet but the original members can't promote as Beast due to trademark issues after they decided not renew their contracts with Cube (former label).

I hope Gikwang will do well in this drama.

It's great news. Lee Gi Kwang in drama. Can't wait...
I saw him back then in my princess... But I didn't recognze him. After I saw Monster... I fall in love with his acting. He's really great.
Hopefully he awe me once again with his flawless act and get lead role in the future...